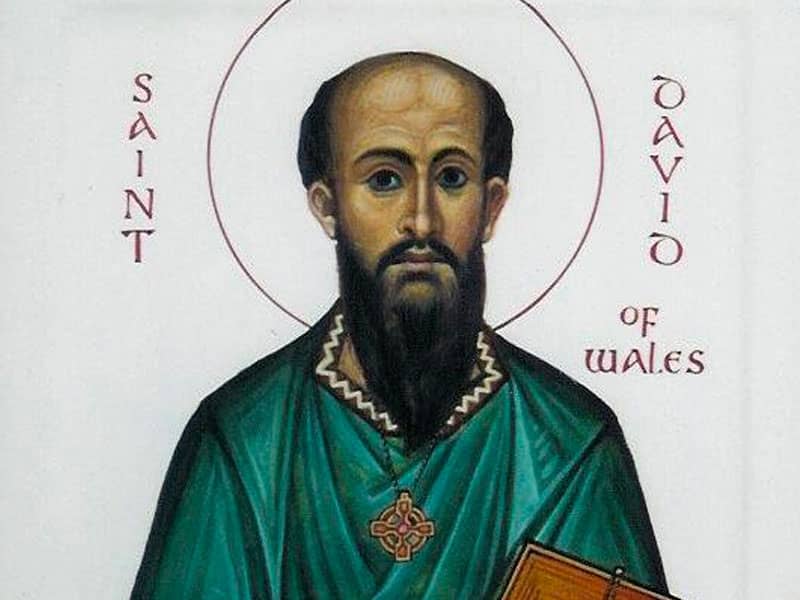 David is the patron saint of Wales and perhaps the most famous of British saints. Ironically, we have little reliable information about him.

It is known that he became a priest, engaged in missionary work and founded many monasteries, including his principal abbey in southwestern Wales. Many stories and legends sprang up about David and his Welsh monks. Their austerity was extreme. They worked in silence without the help of animals to till the soil. Their food was limited to bread, vegetables and water.

In about the year 550, David attended a synod where his eloquence impressed his fellow monks to such a degree that he was elected primate of the region. The episcopal see was moved to Mynyw, where he had his monastery (now called St. David's). He ruled his diocese until he had reached a very old age. His last words to his monks and subjects were: "Be joyful, brothers and sisters. Keep your faith, and do the little things that you have seen and heard with me."

St. David is pictured standing on a mound with a dove on his shoulder. The legend is that once while he was preaching a dove descended to his shoulder and the earth rose to lift him high above the people so that he could be heard. Over 50 churches in South Wales were dedicated to him in pre-Reformation days.