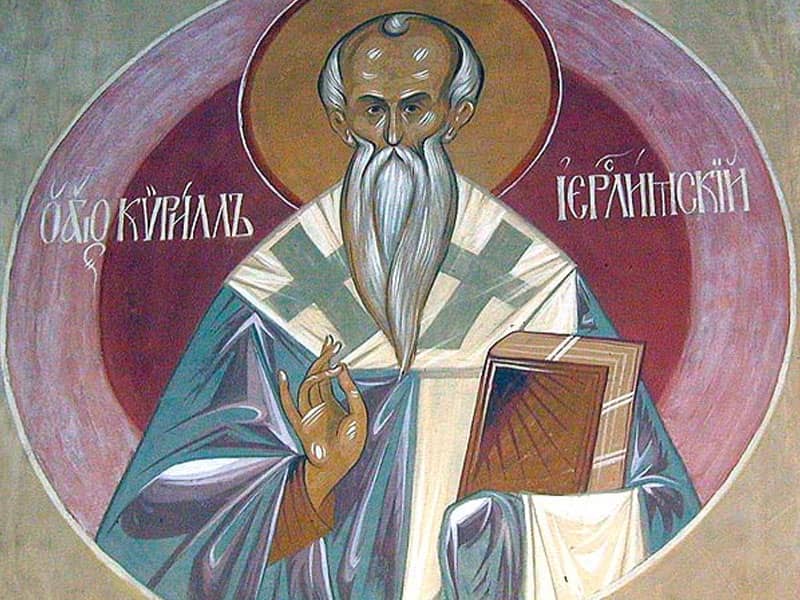 Problems in the Church today are minor compared with the reverberations of the Arian heresy that denied the divinity of Christ. Cyril was to be caught up in the controversy, accused (later) of Arianism by St. Jerome, and ultimately vindicated both by the men of his own time and by being declared a Doctor of the Church in 1822. Raised in Jerusalem, well-educated, especially in the Scriptures, he was ordained a priest by the bishop of Jerusalem and given the task of catechizing during Lent those preparing for Baptism and during the Easter season the newly baptized. His Catecheses remain valuable as examples of the ritual and theology of the Church in the mid-fourth century.

There are conflicting reports about the circumstances of his becoming bishop of Jerusalem. It is certain that he was validly consecrated by bishops of the province. Since one of them was an Arian, Acacius, it may have been expected that his “cooperation” would follow. Conflict soon rose between Cyril and Acacius, bishop of the rival nearby see of Caesarea. Cyril was summoned to a council, accused of insubordination and of selling Church property to relieve the poor. Probably, however, a theological difference was also involved. He was condemned, driven from Jerusalem, and later vindicated, not without some association and help of Semi-Arians. Half his episcopate was spent in exile (his first experience was repeated twice). He finally returned to find Jerusalem torn with heresy, schism and strife, and wracked with crime. Even St. Gregory of Nyssa, sent to help, left in despair.

They both went to the (second ecumenical) Council of Constantinople, where the amended form of the Nicene Creed was promulgated. Cyril accepted the word consubstantial (that is, of Christ and the Father). Some said it was an act of repentance, but the bishops of the Council praised him as a champion of orthodoxy against the Arians. Though not friendly with the greatest defender of orthodoxy against the Arians, Cyril may be counted among those whom Athanasius called “brothers, who mean what we mean, and differ only about the word [consubstantial].”