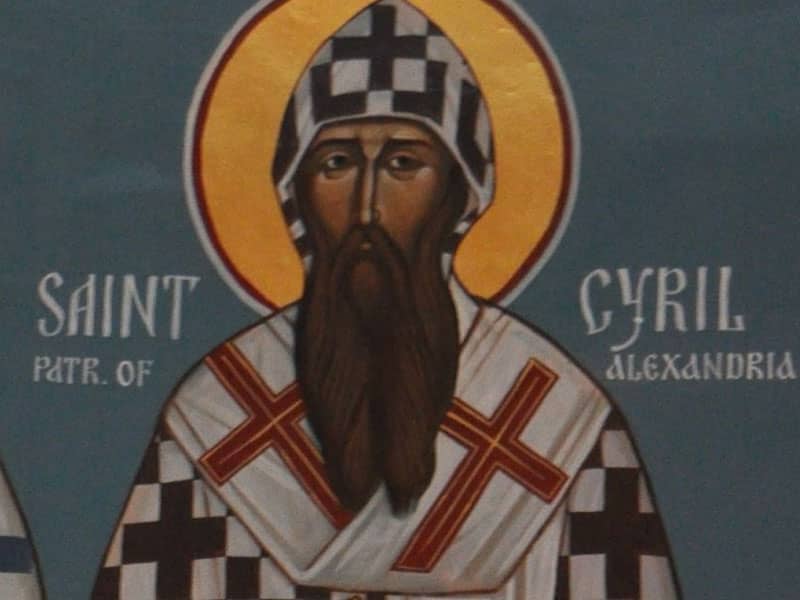 Saints are not born with halos around their heads. Cyril, recognized as a great teacher of the Church, began his career as archbishop of Alexandria, Egypt, with impulsive, often violent, actions. He pillaged and closed the churches of the Novatian heretics, participated in the deposing of St. John Chrysostom and confiscated Jewish property, expelling the Jews from Alexandria in retaliation for their attacks on Christians.

Cyril’s importance for theology and Church history lies in his championing the cause of orthodoxy against the heresy of Nestorius.

The controversy centered around the two natures in Christ. Nestorius would not agree to the title “God-bearer” for Mary. He preferred “Christ-bearer,” saying there are two distinct persons in Christ (divine and human) joined only by a moral union. He said Mary was not the mother of God but only of the man Christ, whose humanity was only a temple of God. Nestorianism implied that the humanity of Christ was a mere disguise.

Presiding as the pope’s representative at the Council of Ephesus (431), Cyril condemned Nestorianism and proclaimed Mary truly the “God-bearer” (the mother of the one Person who is truly God and truly human). In the confusion that followed, Cyril was deposed and imprisoned for three months, after which he was welcomed back to Alexandria as a second Athanasius (the champion against Arianism).

Besides needing to soften some of his opposition to those who had sided with Nestorius, Cyril had difficulties with some of his own allies, who thought he had gone too far, sacrificing not only language but orthodoxy. Until his death, his policy of moderation kept his extreme partisans under control. On his deathbed, despite pressure, he refused to condemn the teacher of Nestorius.