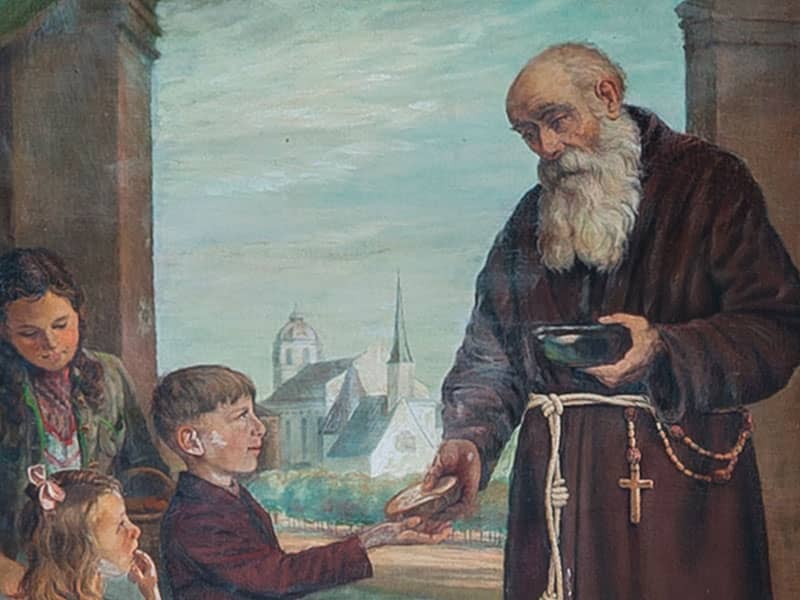 Conrad spent most of his life as porter in Altoetting, Bavaria, letting people into the friary and indirectly encouraging them to let God into their lives.

His parents, Bartholomew and Gertrude Birndorfer, lived near Parzham, Bavaria. In those days this region was recovering from the Napoleonic wars. A lover of solitary prayer and a peacemaker as a young man, Conrad joined the Capuchins as a brother. He made his profession in 1852 and was assigned to the friary in Altoetting. That city’s shrine to Mary was very popular; at the nearby Capuchin friary there was a lot of work for the porter, a job Conrad held for 41 years.

At first some of the other friars were jealous that such a young friar held this important job. Conrad’s patience and holy life overcame their doubts. As porter he dealt with many people, obtaining many of the friary supplies and generously providing for the poor who came to the door. He treated them all with the courtesy Francis expected of his followers.

Conrad’s helpfulness was sometimes unnerving. Once Father Vincent, seeking quiet to prepare a sermon, went up the belltower of the church. Conrad tracked him down when someone wanting to go to confession specifically requested Father Vincent.

Conrad also developed a special rapport with the children of the area. He enthusiastically promoted the Seraphic Work of Charity, which aided neglected children.

Conrad spent hours in prayer before the Blessed Sacrament. He regularly asked the Blessed Mother to intercede for him and for the many people he included in his prayers. The ever-patient Conrad was canonized in 1934.