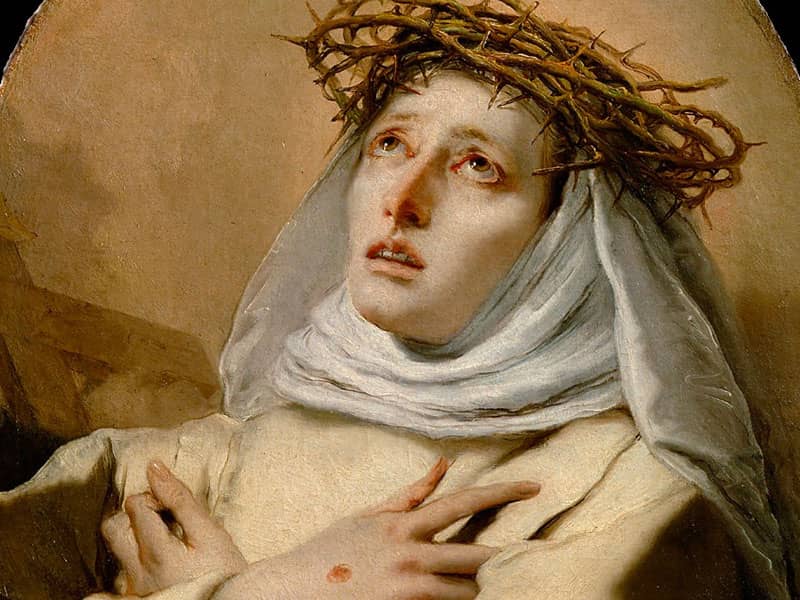 The value Catherine makes central in her short life and which sounds clearly and consistently through her experience is complete surrender to Christ. What is most impressive about her is that she learns to view her surrender to her Lord as a goal to be reached through time.

She was the 23rd child of Jacopo and Lapa Benincasa and grew up as an intelligent, cheerful and intensely religious person. Catherine disappointed her mother by cutting off her hair as a protest against being overly encouraged to improve her appearance in order to attract a husband. Her father ordered her to be left in peace and she was given a room of her own for prayer and meditation.

She entered the Dominican Third Order at 18 and spent the next three years in seclusion, prayer and austerity. Gradually a group of followers gathered around her—men and women, priests and religious. An active public apostolate grew out of her contemplative life. Her letters, mostly for spiritual instruction and encouragement of her followers, began to take more and more note of public affairs. Opposition and slander resulted from her mixing fearlessly with the world and speaking with the candor and authority of one completely committed to Christ. She was cleared of all charges at the Dominican General Chapter of 1374.

Her public influence reached great heights because of her evident holiness, her membership in the Dominican Third Order, and the deep impression she made on the pope. She worked tirelessly for the crusade against the Turks and for peace between Florence and the pope

In 1378, the Great Schism began, splitting the allegiance of Christendom between two, then three, popes and putting even saints on opposing sides. Catherine spent the last two years of her life in Rome, in prayer and pleading on behalf of the cause of Urban VI and the unity of the Church. She offered herself as a victim for the Church in its agony. She died surrounded by her "children."

Catherine ranks high among the mystics and spiritual writers of the Church. In 1970 Paul VI named her and Teresa of Avila as doctors of the Church. In recent years, it has been suggested that she (among other possibilities) should be named patron of the Internet. Her spiritual testament is found in The Dialogue.