Is the Easter Bunny an Abomination Before the Lord?

Although Bible does mention the word “Easter,” nowhere in the holy text are there any Easter bonnets, Easter eggs and certainly no Easter bunny. Is there a danger in embracing pagan rituals in our celebration of Christ's resurrection? 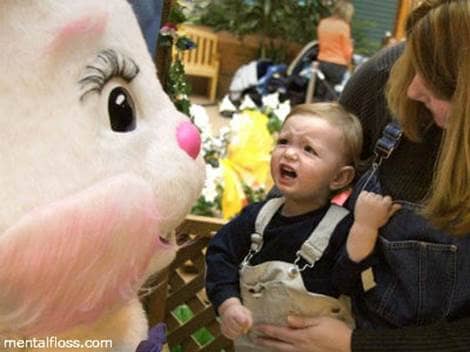 In the Bible, the first Easter was a time of miracles and redemption. Jesus, who had offered the world forgiveness, peace and eternal life, had been publicly executed on Friday in a humiliating crucifixion between two thieves. But on Sunday morning, three days after His death, He rose again – to the consternation of His enemies, the astonishment of His followers and in fulfillment of His promises.

Thus, today Resurrection Sunday is the most important day on the Christian calendar.

But although Bible does mention the word “Easter,” nowhere in the holy text are there any Easter bonnets, Easter eggs and certainly no Easter bunny.

“Where then does the Easter bunny come from?” asks Allen Butler, writing for the Yahoo Contributor Network. “In the ancient world, the rabbit has long been a symbol of fertility. The rabbit is known for its reproductive prowess, in fact even today we talk of couples who have many children as ‘multiplying like rabbits.’

“Because it is known to reproduce often, it was seen has having special powers in assisting humans to reproduce. In fact, our own lucky rabbit's foot goes back to this ancient tradition.

“In Europe prior to the introduction of Christianity the ancient pagans already had their own springtime festivals, as did almost all other ancient peoples. Because spring is the time, after the harshness of winter that the world begins to bloom once more, it is seen as a time of replenishing and renewal, birth and rebirth, fertility.”

So, a good case can be made that the Easter bunny is not Christian at all.

“The Goddess of Fertility in Northern Europe before the coming of the Christians was Eostre,”notes Butler. “It is in fact from her that our own word for Easter comes. The consort of Eostre was none other than a hare, that great animal symbol of fertility. According to some traditions, Eostre cast the hare into the heavens, creating the constellation we know today as Lepus the Hare. Some stories also say that Eostre gave Lepus the ability to lay eggs once a year, eggs also being an ancient symbol of fertility.”

In terms of orthodox Christianity, the case for the Easter bunny is pretty suspect. Its origins are pagan. In fact, there are those conservative Christians who declare that the bunny is a Trojan horse – pretty on the outside, terrible on the inside, sneaking the enemy inside the city gates.

Bible teacher David C. Pack calls the Easter bunny an “abomination in the sight of the Lord.” That’s pretty strong language, usually reserved for the wicked who were drowned in Noah’s day, the hedonists consumed by divine brimstone at Sodom and Gomorrah or the screaming crowd that demanded Jesus be crucified.

“The Bible is the source for all things Christian. Does it mention Easter? Yes.”

He cites Acts 12. King Herod began to persecute the church, culminating in the brutal death of the apostle James. This pleased the enemies of Christianity so much that the apostle Peter was also taken prisoner by Herod. Verse 3 says, ‘Then were the days of unleavened bread.’”

That would be a reference to the traditional Jewish Passover ordained by God in Leviticus 23. “Now,” writes Pack, “read verse 4: ‘And when he [Herod] had apprehended him, he put him in prison, and delivered him to four quaternions of soldiers to keep him; intending after Easter to bring him forth to the people.’”

So, the culture of that day observed Easter? No, disputes Pack. “This passage is not talking about Easter. How do we know? The word translated Easter is the Greek word pascha (derived from the Hebrew word pesach; there is no original Greek word forPassover), and it has only one meaning. It always means Passover—it can never mean Easter!

“For this reason, we find a Hebrew word used in the Greek New Testament. Once again, this Hebrew word can only refer to Passover. And other translations, including the Revised Standard Version, correctly render this word Passover.

“Instead of endorsing Easter, this verse really proves that the church was still observing Passover ten years after the death of Christ!

“Now let’s go to the other scriptures authorizing Easter. This presents a problem. There are NONE! There are absolutely no verses, anywhere in the Bible, that authorize or endorse the keeping of Easter celebration! The Bible says nothing about Lent, eggs and egg hunts, baskets of candy.

In fact, declares Pack , “it does mention hot cross buns and sunrise services as abominations, which God condemns. The mistranslation of Acts 12:4 is a not-so-subtle attempt to insert a pagan festival into scripture for the purpose of authorizing it.”

“These traditions co-existed for some time. When exactly the rabbit first became a major part of the Christian celebration is unknown. Where is a little bit clearer, the first written mentions of the Easter bunny come from Germany in the 15th Century, although we do not know for how long the Germans had used the symbol. It was also in Germany that the tradition of making chocolate bunnies to celebrate Easter began, sometime during the 1800's.

“Before this, however, the Easter bunny had already come to the United States. German settlers in Pennsylvania brought along their traditions with them, including the traditions of the Easter bunny. They called him Osterhase, or Oschter Haws, who would lay brightly colored eggs to good children who would make special nests in their caps and bonnets the night before.

“Over time the tradition grew, and soon Osterhase (or the Easter bunny as he is known today) began to bring more than just eggs, but chocolate and candies as well. Rather than making nests in caps and bonnets, the Easter bunny would leave his treasures in a decorated Easter basket.

“Although begun by German immigrants, these practices soon caught on throughout the United States and are now almost universally practiced. Christians and non-Christians alike look forward to Easter as a celebration of life and family, and the Easter bunny, that ancient symbol of fertility, is the central figure. Across the country and around the world children wait eagerly for Easter to find the baskets full of eggs and chocolate left for them the night before by the Easter bunny.

And that is an abomination, declares Pack. “Easter has long been known to be a pagan festival! America’s founders knew this! A children’s book about the holiday, Easter Parade: Welcome Sweet Spring Time!, by Steve Englehart, states, ‘When the Puritans came to North America, they regarded the celebration of Easter—and the celebration of Christmas—with suspicion. They knew that pagans had celebrated the return of spring long before Christians celebrated Easter…for the first two hundred years of European life in North America, only a few states, mostly in the South, paid much attention to Easter.’

“Not until after the Civil War did Americans begin celebrating this holiday: ‘Easter first became an American tradition in the 1870s.’ Remarkable! The original 13 colonies of America began as a ‘Christian’ nation, with the cry of ‘No king but King Jesus!’ The nation did not observe Easter within an entire century of its founding. What happened to change this?

Well, don’t be so quick to toss the baby out with the bath water, says Michael Gryboski writing for the Christian Post. “Christians will celebrate Easter this Sunday to observe when Jesus Christ resurrected from the dead. Yet along with the sacred observance will come a more secular American tradition wherein many children will leave out baskets with the playful expectation that the Easter bunny will come.

“Hosts of international communities decorate and participate in these traditions in their own unique ways. The Christian church and its ambassadors throughout history have appropriated the symbols of the cultures they encountered,” said Kinnison. “The use of eggs in particular has been used to identify the essence of life and the resurrection of Christ. By using these known symbols within the culture, Christian missionaries find ways to connect and communicate the Gospel of Jesus Christ to cultures unfamiliar with the biblical stories and narratives.” Kinnison compares that practice to what Paul did at Mars Hill in Acts 17.

However, Kinnison noted: also told CP of the caution that should be noted with this practice. “What becomes problematic is when we lose the meaning of the symbols and they take on new or different cultural values that are antithetical to the Gospel.”

So, before you rush to embrace eggs or bunnies, be cautious and skeptical.

Steve Russo, a Christian evangelist from Ontario, Calif., and host of the radio program “Real Answers,” wrote a column for The Baptist Press regarding the issue of Christian parents and the Easter bunny. ‘Before we get too carried away about holiday traditions, let's remember all the things that are such an integral part of our culture, things like birthday cakes and even calendars and the days of the week – all of which have pagan roots,’ wrote Russo.

“‘It's not necessary to deprive your children of good fiction so long as they understand the difference between fact and fiction. If you are careful and wise in how you incorporate the Easter bunny tradition, it can be fun for you and your children and also provide a great springboard for your family's discussion about why we celebrate Easter.’

“It is thought that the word Easter comes from a pagan figure called Eastre who was celebrated as the goddess of spring by the Saxons of Northern Europe. A festival called Eastre was held during the spring equinox by these people to honor her. The name for a celebration of the sunrise and a change of season was eventually applied to the Christian celebration of the resurrection of Christ and the new era He heralded.

“The goddess Eastre’s earthly symbol was the rabbit, which was also known as a symbol of fertility.

“Should Christian parents allow their children to participate in traditional activities that refer to the Easter bunny? This is a question both parents and church leaders struggle with. There is nothing essentially evil about the Easter bunny, unless it is used to promote the goddess of spring or fertility rites. What is important is our focus. If our focus is on Christ and not the Easter bunny, our children will understand that, like Santa Claus, the Easter bunny is merely a symbol. As with Christmas, Easter should be a time to reflect upon and celebrate the incarnation, the resurrection and the risen Christ.”