The Force Awakens on Skellig Michael

11.6 km off the coast of County Kerry, Ireland there lies an ancient holy site with ambiguous beginnings. Skellig Michael is an early medieval monastic site that is isolated, breathtakingly beautiful, and remarkably well preserved. 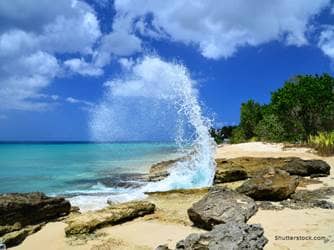 11.6 km off the coast of County Kerry, Ireland there lies an ancient holy site with ambiguous beginnings. Skellig Michael is an early medieval monastic site that is isolated, breathtakingly beautiful, and remarkably well preserved. Embracing the extremes of Christian monasticism this island and its nearby counterpart, Little Skellig or Bird Island, is a hotbed for burgeoning scholarship. With archaeology ongoing since 1986 there has been limitless potential for discovery. Scholars and modern day visitors alike all leave Skellig with one resounding and awe-inspired question: why did monks settle on this island? The answer embraces the heart of Irish asceticism and resonates with modern pilgrims and sci-fi nerds alike.

The Cambrai Homily, one of the earliest known Irish homilies dating to the 7th or 8th century, is best known for its mention of red, green, and white martyrdom. White martyrdom is when someone “departs for the sake of God from everything that they love, although they may suffer fasting and hard work thereby.” Peregrinatio pro amore Christi, wandering for the love of Christ, is an example of white martyrdom. This self-imposed exile was previously found in Irish law and reserved for individuals whose crimes were so great that they could not be saved.

Perhaps if these lost souls wandered long and far enough they would find God along the way. Later adopted by monastics, peregrinatio became a term used to describe an important spiritual journey. As guests of the world, individuals who partake in this journey do so because of an inner conviction to seek their true spiritual home. 21st century pilgrims and tourists have been drawn to Skellig Michael for its beauty and mysticism. Now, with the release of Star Wars Episode VII, tourists are journeying to a famous filming location. The visit is not for the faint of heart as it requires a 1.5 hour boat ride along choppy water and an arduous climb to the top of the island.

The steps are uneven, there is no railing, and the mist from the ocean can make the path dangerously slick. As your legs start to ache around step 150 you can’t help but admire the tenacity and zeal of the monks who accomplished this remarkable architectural feat. With no fresh water source and very little area for farming the monks would have been forced to capture rain water, birds, and fish in order to survive. The peak of the island was particularly susceptible to severe storms, offering no natural shelter from the wind and rain. Surely, just as the Cambrai Homily states, these individuals gave up everything that they loved and suffered hard work for the sake of God. Celtic Studies scholar Esther de Waal once stated that journeying is an intrinsic part of the religious experience. The idea has been prevalent since the earliest days of Christianity and it is embedded in countless mythologies. The proclivity for heroes to embark upon journeys which would alter the course of their existence has been repeatedly noted. Star Wars, deliberately modelled after Joseph Campbell’s Heroes Journey, has been one of the most well researched films in this area.

With the release of Episode VII: The Force Awakens it is evident that Luke Skywalker’s journey embraces the original intent of peregrinatio. How fitting that the final scene takes place on Skellig Michael, an island noted for its embrace of peregrinatio. We know from the film that Luke was training young Jedi Knights when Ben Solo, later known as Kylo Ren, turned to the dark side of the Force. Although the events that unfolded in his life are currently shrouded in mystery (no doubt leaving room for a thrilling Episode VIII) we do know that Luke disappeared and went into hiding.

The Republic (formerly the Rebellion) searches for Luke to defeat the resurrected Empire, now known as the First Order. We see very little of Luke in the film but his influence and power are at the forefront of the plot. Why did he disappear? Perhaps the seduction of Ben Solo to the dark side left Luke feeling guilty and struggling with his role as a Jedi Master. Han Solo mentions that he may have left to search for the sacred site of the First Jedi Temple. Fan theories suggest that Luke deliberately created Kylo Ren to restore balance in the Force.

Whatever the case, Luke Skywalker’s journey, one that is intricately related to the Force, has obviously required him to leave all that he loves and endure suffering. In the closing scenes of Episode VII we see a haggard looking Luke on top of Skellig Michael. His self-imposed exile has come to an end with the arrival of Rey and the return of his lightsaber. How great was Luke’s crime? Was he fearful of training new Jedi? We know from Yoda that “fear is the path to the dark side. Fear leads to anger. Anger leads to hate. Hate leads to suffering.” Will Luke’s journey through heroism, fear, and guilt lead to a greater understanding of both himself and the Force? It seems likely. There could be no greater location for his self-imposed exile than on the monastic site of Skellig Michael. With the development of his story in Episode VIII it will become evident that Luke, like the ascetics that inhabited the island before him, has engaged in the sacred act of peregrinatio.

Sumer Bingham is currently pursuing her doctoral degree in Theology and Religious Studies with a focus on Early Irish Monasticism and working as an Assistant Professor of Religion at the University of Pikeville.