The Legacy That is Tim Brown

Brown is sharing his story with the world in his new book “The Making of a Man.” The book honors God and discusses how to live life with integrity and the willingness to never give up. 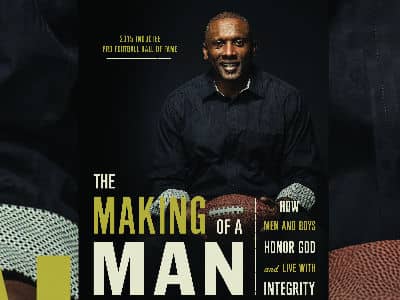 When you think of the greatest receivers to play in the National Football League, one of the names that will be discussed is the great Tim Brown. While there may have been some highs and lows throughout Brown’s life, through it all he chose to be a man and stay true to his self. “My plan was to become a deacon of the church - a totally different path. I scrambled around for a few years. Eventually I manned up and was able to stand solidly on my feet and declare what I wanted to do and not only declare it but live it,” said Brown. “Faith has made me who I am. That is what I want people to see and take away from my conversations. And take away from my actions. I am different and not in a crazy way. But I am trying to serve God.”

Now Brown is sharing his story with the world in his new book “The Making of a Man.” The book honors God and discusses how to live life with integrity and the willingness to never give up.

During his career with the Los Angeles Raiders he was often referred to as the leader because he exuded a sense of command and authority that only great leaders possess. No matter what adversity he faced, he always sought out a reasonable path to overcome the issue at hand or at least respond in a humble fashion. Brown’s relationship with owner Al Davis was nothing short of difficult. Yet, he found a way to make it work and make the most out of his time playing for the Raiders. “I knew what to expect from him. When you know what people are, you know what to do and in many ways it was motivation. It helped me be a better football player and a better man. I always looked at the positive side,” said Brown. “There were times when we would scowl at each other but I learned to use my haters as elevators.”

And now after the glory days as a football player have passed, Brown is still living it up. Recently he was inducted into the Pro Football Hall of Fame and he is continuing to serve as an outlet to teach others about becoming a man and following their dreams. And one of the best parts is now his children are able to see, firsthand, the outcome of his hard work and the legacy he has set up.

“Your legacy matters. My children are able to see the fruits of what I did - from college football hall of fame and now the NFL hall of fame. They’ve been able to go to the award banquets and see these things. And their eyes light up. It’s my teaching moment, these things are great but they’re only great if you use these moments for Christ,” said Brown. “I always address the question, what kind of godly legacy am I leaving? Houses and money aren’t necessarily important. I want my family and others to know that I tried my best to lead a life to Christ.”

Brown is a testament that hard work and perseverance always pays off. When you’re in the trenches digging your path to success, you may doubt yourself or be confused about the true meaning behind things. But Brown’s legacy has proven that all this is just the making of a man.