Wade shares how his life became bigger than basketball. 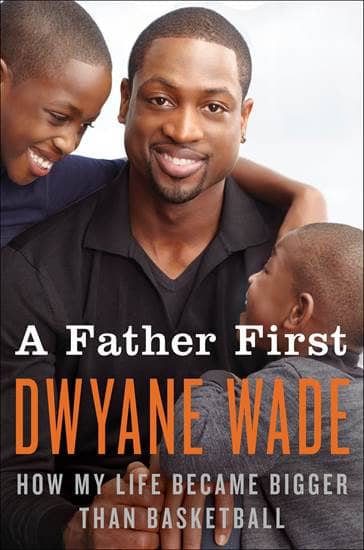 Is it possible to be an athlete, a role model, a philanthropist, a humanitarian, a father, a son and always have a positive spirit – Dwyane Wade embodies each of those titles with a smile. In his book A Father First: How My Life Became Bigger Than Basketball, Wade lets everyone in on the highs and lows of his life. His childhood, the divorce, his professional basketball career and most importantly his two sons; nothing is off limits.

Wade’s sons, Zaire and Zion, have helped mold him into the man he is today. “I’m learning with them and they’re learning with me,” Wade said. “I wish I could have all the answers and be right all the time. There’s no guideline and I’m going to make mistakes.”

Recently, Wade was awarded sole custody of his children. It’s been a battle but he never gave up because they were a part of him that he was not willing to live without. “My best quality is my love. I’m not one of those dads that don’t tell them that they love them or hug them every opportunity that I have,” Wade said.

Wade’s parents were separated and he lived with his mother. Unfortunately, his mother struggled with drug issues, one day his older sister took him to his father’s house and left him there. Wade recognizes his sister’s bravery saying, “I appreciate that my sister had the foresight to see the future and to know that I needed my dad in my life. That move became the best thing in my family.”

Though Wade believes that everything happens for a reason and that despite the struggles he and his family had to endure, there is a purpose. “I know who I am as a person is because of the struggles that I’ve had in life. I appreciate the moments when my mother wasn’t around and when my dad was tough on me because it molded me into the person I am today,” Wade said. “Without that I don’t know that I would be who I am and I like who I am. At moments it was hell but it was my hell.”

Wade believes that his biggest accomplishment is not ever giving up, no matter what the situation pertains to; whether it’s basketball, business investments or being a parent he doesn’t let any obstacles stand in his way. “I will always believe in myself and work as hard as I can to change this generation,” Wade said.

There is no doubt that Wade’s world is centered around his sons and he believes that parents, no matter what the circumstances may be, should keep the focus on their children. “We can teach them as much as they can teach us,” Wade said. There are going to be road blocks in any situation but that should never deter anyone from being an active, supportive and loving parent.

When you strip away the fame, the titles, the designer lines and the money the same man is left. A man who has dedicated his life to being the best father he can be.

Dwyane Wade is a guard for the Miami Heat and was recently appointed by President Obama to lead a new parenting program geared toward encouraging fathers to become more involved in their children's lives. He lives in Miami, Florida.