Seeing Aslan Again and for the Last Time 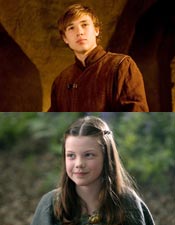 There's no doubt William Moseley (Peter Pevensie) and Georgie Henley (Lucy Pevensie) are impressive, well-grounded actors who have grown in acting depth since the first "Narnia" movie. Their on-screen sibling dynamic is also apparent off-screen, both joking and talking in sync. Moseley is warm-hearted and a captivating storyteller, Henley is bright-eyed and a sensitive thinker. While "Prince Caspian" marks the last "Narnia" movie for Moseley, Henley will return in the next movie, "The Voyage of the Dawn Treader."  Beliefnet and other media outlets recently sat down with Moseley and Henley to discuss their roles in "Prince Caspian."

Did you approach your roles differently [in this movie] than you did in the first movie?

Georgie: Lucy has grown up since the last film, she understands the fighting more. I think she feels like it's all right to be a part of it. So, I think [she's] approaching the world differently with a lot more, I'd say, openness.

William: I actually trained in New York for three and a half months. I trained on my acting to get better because I knew I was taking on a new role this time. I knew it was going to be more of a physical film, so I trained three times a week in this underground Brooklyn boxing gym. There was this boy, he must have been 13. I don't know why he wasn't at a school, but he was just like so fast. Really incredible. It really gave me the motivation to go full ahead with these stunts and to commit myself 110 percent.

The paradox of the book is that Aslan's larger yet harder to see, and that seems to be saying something about aging. Have either of you thought about what that message was about?

William: I think when we talk about seeing, it's more believing. You believe and then you see. Aslan represents God. People say every day, 'Well, why can't I see God? If he's there, why can't I see him? Why didn't I see him? Why isn't he there? He's this force, he's this unbelievable being, and why can't I see him?' [Aslan's] this huge lion, in a physical form. When [the kids] start to believe, when Peter really sees that [he] has to really [show] remorse [for] all of his sins, then he starts to see Aslan and the magic starts to happen. I don't think it has anything to do with aging. I think it's more to do with your strength in belief.

Lucy has struggles seeing Aslan more in this movie than the previous. Once again, she's older and he says, 'things are changed when you're older.' What do you think that was all about?

Georgie: I think when you get older, your mind does close more. If you think about it, when you're a child, everything's new to you. Your imagination is so amazing. You can play all these wonderful games and it's just such a lovely time. And then, you get older and if you have an imaginary friend, it fades away, and then you grow up more and you stop playing those games.  But, the thing is, Narnia isn't a game. It's a real world, and although Aslan fades for a while, he's come back and he's stronger than ever and he's bigger than ever. I love that saying, "as long as you grow, so shall I," because when I grow, it's like he becomes more mature and more big. It's almost like Aslan suits you and Narnia suits you more. It's all about compatibility and Narnia suiting yourself and your personality.

William: I think what Georgie's saying is really interesting. I don't know if anyone's read [William] Blake, but I think it's a lot about that innocence. There's innocence when you're younger, and there's an almost deeper innocence when you're older. "The Little Lamb" and "Tiger, Tiger," both [of] those are about innocence and experience.  I think when Lucy is younger, she has this innocent outlook and I think all the Pevensies do. When they [go] back, they've had this experience and they're almost cynical. They're almost closed off and they're older, but they get almost a deeper innocence through this lesson. We see that and Aslan sees that in them as well, and that's why they're given their exit to Narnia nobly.

Georgie: I think that because they've been to Narnia before, they feel like they know Narnia better than anybody else because they've ruled it. When they come back to a completely different Narnia, they don't cope with that as well as they do until the end.

Georgie: I think that Lucy's connection to Aslan has something to do with the fact that she's the youngest, and she's always had a more open mind than the others. She introduced them to Narnia and she got them caught up in the whole thing to start off with. I think because she has such an open mind and she's very trusting, Aslan sees that in her and he shows himself to her first because he knows that she will believe he's actually there and she won't think, "Oh, it's just a vision…he's just a wild lion."

What do you think caused the lack of faith from Peter?

William: I think Peter just feels very self-entitled. I think his ego got on top of him. He was the high king, and then he got back to England, nobody had any respect for him. He'd gone [back] into Narnia and nobody had any respect for him there. They didn't have a parade for him by any means. He just thought he would do it without Aslan. He thought he could take it on.

How would you describe your perfect Narnia?

Georgie: I loved Narnia when the Telmarines and the Narnians are living harmoniously together. You've got that amazing balance of magical creatures and the humans, who actually originally came from our world. I really loved the fact that they learn to live together and that Narnia was never right unless a son of Adam was king.

In the closing scene when you say you're not coming back to Narnia, you say you've learned everything you can from Narnia. What did you learn?

William: My character learned a very important lesson in humility. I think leadership, at the end of the day, is about serving other people. It is about serving a place or a country and not serving yourself. Peter really had to learn that very valuable lesson and reinstate his trust in Aslan. And, Aslan says, you've learned all you can. Your trust is 100 percent in me and all the leadership skills you've learned. Peter obviously has to pass Narnia on to Caspian and has to pass the torch on, very honorably and nobly, and I don't think he would have done that at the start, by any means. So, there's definitely a strong leadership journey there.

The four of you spent the last few years together and have grown--judging by the chemistry on the screen--pretty close. Knowing that two of the four are not coming back for the next film, how hard was it wrapping that film to sort of have the family dispersed?

Georgie: I started auditioning when I was seven, and I met the others when I was eight years old, and I'm 13 in July. That is an amazing journey to spend with a group of people. I think we all know each other so well…and that's a really hard bond. I don't think it will be broken because we know you can't break something like that so abruptly. We'll still be friends.

William: For me, it was actually really sad filming the final scene. It was almost one of our final scenes on set, the moment when I hand the sword over to Ben [Barnes] and when Anna [Popplewell] gives him a kiss good-bye. I said to Andrew [Adamson] I felt like being emotional. He said no, just be stoic, just be stoic. And I was like, okay, well, I'll just trust Andrew. He's my director. I trust him 100 percent. When I saw the film, I knew why he did it because we were ready. At that point, I was still thinking, am I ready to leave Narnia as William? Am I ready to be leaving Narnia, because this has been a huge part of my life for six years? Now that I've seen the film, I do feel like I've moved on. I'm ready for something different and I'm ready for something new.


Click here to read an interview with Andrew Adamson, the director.