With 'Harry Potter and the Deathly Hallows: Part 2' bringing the amazing journey to a close, we bid Harry Potter goodbye. 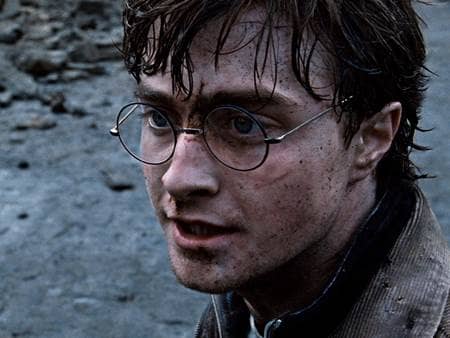 I’m sitting in the Warner Bros. screening room trying to arrange my 3D glasses comfortably while I wait to see the eighth and final Harry Potter film, Harry Potter and the Deathly Hallows: Part 2. The room is packed, a few journalists even sitting on the theater’s steps. Everyone was afforded the perk of bringing one guest and it appears as if that was taken full advantage of. The air hums with excitement, a thoroughly uncommon phenomenon at such events, where thinly disguised cynicism is usually the norm. “I’m doing Smurfs after this,” one journalist says with a groan, “and last week I did Zookeeper.” He shakes his head; the experience was clearly memorable for all the wrong reasons. “But this,” he says as his eyes light up with a twinkle, “this I’m looking forward to.” As the lights dim and the lightning-edged Harry Potter title treatment comes up on screen for what will be the last time, you can practically taste the anticipation in the room.

The following day that same electric anticipation bounces off the wall at the press conference while we wait for the filmmakers and stars that brought Harry Potter to life to appear. One journalist has even brought her 10-year-old son with her. He proudly wears a LEGO Harry Potter t-shirt and grips a well-loved copy of Harry Potter and the Deathly Hallows that he’s hoping to have signed by the cast and crew. “It’s pretty cool,” he says, an obvious understatement. Another journalist, giddy over the chance to talk with Emma Watson, tells me that she’s a beauty editor for US Weekly. “I’m a HUGE nerd,” she says in response to the quizzical expression on my face, “and really wanted to come for this.” The line between professionalism and fandom wavers back and forth and, other than physical size, it’s difficult to tell the wide-eyed children apart from the professional entertainment writers.

That magical appeal which has transfixed hundreds of millions regardless of age is why the Harry Potter series has become such a history-making worldwide phenomenon: 450 million copies of the books in 67 different languages; 11 million copies of the final book sold in the first 24 hours; over $2 billion in domestic box-office alone, making it the most commercially successful film franchise of all time. “One of the things I love about the books, and hopefully the films, is that they didn’t patronize,” says producer David Heyman, who discovered the first manuscript, almost by accident, before it was even published. “They were books that parents could share with their children but could enjoy too, and I think therein lies one of their great pleasures.” Criticized at times for the increasingly dark tone that the latter books developed, author J.K. Rowling’s decision to “grow the books up” as her young fanbase aged undoubtedly contributed to their widespread appeal. “It comes down to one simple thing,” director Chris Columbus (who helmed the first two films) said in a recent interview with Entertainment Weekly, “Seven brilliantly written books.”

“I never wanted any of you to die for me,” says Harry to his friends, his face caked with dirt and rubble from the devastated Hogwarts castle. The final film hits the ground running, starting where Part 1 left off, and it doesn’t let up for a second. With treasure heists at Gringotts bank, fire breathing dragons, more horcruxes than you can shake an Elder Wand at, and screen shattering good-versus-evil duels, there is enough spectacle to sate even the most demanding summer moviegoer. But director David Yates has wisely chosen to spend most of his attention on the tender moments of romance and moving displays of sacrifice that have made Harry Potter such an inspiring tale. Unlikely hero Neville Longbottom’s stirring battlefield speech at the end of the film, in the face of almost certain destruction, is a perfect example of this. In spite of the achy feeling behind my ears from wearing the 3D glasses, I’m transfixed, lost in the magic of a good story, well told.

At the press conference the next day Matthew Lewis, who stars as Neville, is telling us about that scene and what it was like to act opposite Ralph Fiennes, who plays Lord Voldemort with a chilling viciousness that is breathtaking. “Ralph is a very, very frightening man, especially when he looks like that” Lewis says as he glances over his shoulder at an enormous cardboard stand featuring Voldemort. Fiennes, head bald with snake-like slits where his nose should be, looks like evil incarnate. “[During rehearsal], Ralph had hair and a nose and yet he was still terrifying. And he did this thing – to this day I have no idea whether he did it on purpose, whether he’s even aware of it – but he just stared at me. The whole time. Even when other people were speaking his eyes never left my face. And I just went to pieces. I suddenly felt like I was in the hardest exam of my entire life. And it was frightening.” The scene in question is one of the highlights of film; it elicited cheers from the press during the screening. “I loved every single minute of it, and being able to work one on one with Ralph, despite the pressure, despite the nerves, was one of the greatest experiences of my life and I will never forget it.”

Unlike many actors and actresses on most other films, you can tell that Lewis and his fellow cast and crewmates are genuinely in awe of what they’ve been a part of. There is a palpable respect that is accorded the material; it’s obvious that they love Harry Potter as much as we do. “I was able to use a lot of my own genuine emotion that I felt about loss and all of it coming to an end,” says Emma Watson, the young actress who has brought life to Hermione Granger, one of Harry’s closest friends. She is, inarguably, the most adorable, charming human being on the face of the planet; she has the entire press core in the palm of her hand and doesn’t even realize it. “[During] the scene where we stand on the bridge after the battle, and before we flash forward, I remember just feeling exactly how I guess Hermione would be feeling: Wow, this is all coming to an end. Look at everything we’ve achieved.” As Watson leaves the stage, Alex, the young autograph hound, tentatively asks her to sign his book. When the glowing actress leans over to scrawl on the cover page, an audible “Awwwwwww” escapes from the journalists. The moment is adorable, certainly, but there is also a note of longing: we wish we were the ones having Emma Watson autograph our dearly loved books. Everyone wants one last chance to experience the magic of Harry Potter.

Harry and Voldemort, enemies by fate, face one another on the ramparts of Hogwarts castle. Everything has led to this, both for Rowling’s characters and for us, her audience. It’s the moment we’ve been anticipating for over a decade: the Boy Who Lived against He Who Must Not Be Named. “Come on, Tom, let’s finish the way we started,” Harry says as he grasps Voldemort around the neck, “…together!” Harry flings himself into the chasm, pulling a screaming Voldemort down with him. The confrontation that we’ve waited for is as epic and moving and satisfying as we could have hoped. J. K. Rowling did not disappoint when she penned the finale to her amazing story, and the filmmakers entrusted with this cherished franchise do not disappoint in bringing it to life on the big screen.

“I’ve had such an amazing time on Potter,” said Daniel Radcliffe in a recent interview with Larry King (he was unfortunately unable to attend the press conference due to existing obligations with How to Succeed In Business, the Broadway show he is currently starring in). “It’s been such an extraordinary experience to work with, essentially, the same group of people for 10 years.” After wrapping, Radcliffe confessed that he “wept like a child.” Nor was he the only one. At the final cast and crew barbecue dinner, complete with ice cream served from Rupert “Ron Weasley” Grint’s own ice cream truck, a compilation video was shown of everyone from the lowliest runner to the megawatt stars to J.K. Rowling herself waving goodbye. The video (after which there “wasn’t a dry eye in the house” according to producer David Barron) concluded with director David Yates bidding farewell, getting into his car, and driving off. “We went to Chicago and tested the picture and we got these little cards that everyone fills out,” Yates says, trying to sum up his experiences directing the final four Potter films. “And this young girl gave one note. She didn’t criticize anything, she just wrote ‘Goodbye childhood.’”

Alex McCully, the one actual child in attendance at the conference, holds his treasured copy of Deathly Hallows afterwards, the signatures of Hermione and Ron and Draco and Neville hidden underneath the cover. “I’m a bit sad,” he says of the series’ completion, but doesn’t really look it. “I really really really want to be in the film industry now,” he quickly continues, his eyes lighting up. He knew he wanted to be a director after watching the climactic confrontation between Lucius Malfoy (played by Jason Isaacs) and Harry at the close of the second film, Harry Potter and the Chamber of Secrets. “It was so stunning and so believable that I said, ‘Oh I really want to make something like this!’” For Alex, Harry Potter doesn’t mark the end of an era as it does for the rest of us, but the beginning of a journey. He’s not really saying goodbye to Harry at all.

I’m thinking about that as I tuck my four-year old daughter and three-year old son into bed later that evening. She asks me for a story, so I tell them about a boy named Harry Potter who didn’t have a mommy and daddy and was forced by his mean uncle and aunt to live in a cupboard under the stairs. He was very sad and didn’t have any friends.

“But then, one day,” I continue as I lower my voice for dramatic effect, “Harry got a special letter.” “What was in the letter?” my daughter asks, breathlessly. Both their tiny pairs of eyes are large; they can tell this is a special story. “It told him that he was really a wizard,” I say – they both gasp – “and that he would be going to a special school to learn about magic, and he would make lots of very good friends and he would go on lots of exciting adventures.” She wants to hear more but I tell her that I don’t think she’s quite old enough to read the books yet. “Maybe when I’m five?” she bargains, always the negotiator. “Yes, sweetheart, maybe when you’re five,” I say. She rolls over, squeezing her teddy bear tight, content in the knowledge that one day she’ll get to hear more about the magical boy named Harry Potter.

So, goodbye for now, Harry. But I’ll see you again, real soon.