You’ll find yourself researching the war and the helpless refugees that are forced to fight and fall victim to this genocide. It forces a common sense of humanity to unite us all – and that’s the key. 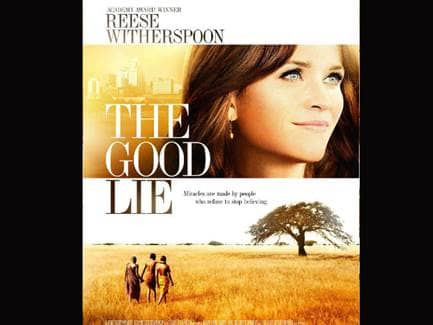 It’s not about Hollywood A-listers. It’s not about the glitz and glamour behind the scenes. Instead, The Good Lie is a film about the dismal truth. A war, worse than the civil war, is taking place in Sudan. Men, women and children are being killed and fighting for their lives.

Based on true events, The Good Lie stars Reese Witherspoon who plays Carrie, an employment agency worker who helps find the Sudan refugees a job. However, after meeting the refugees she feels compelled to go a step further and guide them.

“I came from a place of not knowing, I knew very little about the story,” said Witherspoon. “At the end of the film we got to go to the Kakuma refugee camp. It was very emotional, seeing over 250,000 people displaced.”

Unlike other Hollywood recounts, The Good Lie spends the first half hour, of the film, giving you the account of the refugees’ lives. Your heart will break for them, as you know that this on-screen portrayal is the truth. “I believe that the film provides a great opportunity to raise awareness but moreover bring change,” said Witherspoon.

Screenwriter Margaret Nagle wrote the film ten years ago. From the beginning, Nagle wrote the role of Carrie with Witherspoon in mind. “She is so strong. She has light and dark going in. She is incredible – you look at her and she has so much going on in those eyes. Yet, she’s every woman,” said Nagle.

The film will inspire and speak to your soul. You’ll find yourself researching the war and the helpless refugees that are forced to fight and fall victim to this genocide. It forces a common sense of humanity to unite us all – and that’s the key.

The Good Lie is more than a film with Reese Witherspoon, it’s more than a film produced by Ron Howard – it’s a film about survival. It’s a film that demands the world to face reality, while imprinting a new definition of humanity within our hearts and souls.