'Flags of Our Fathers' 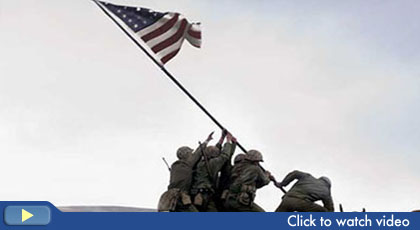 In his spaghetti westerns, Clint Eastwood boiled heroism and cowardice down to simple choices made by un-spectacular humans in the midst of moral conflict. As "Dirty Harry," Eastwood stripped away the hero perceptions propagated by P.R. departments and gave us an authentic cop, complete with shortcomings and attitudinal warts. As an aging actor and emerging director, he continually gives us honest, fresh journeys into new cultures, eventually landing Academy Awards for "Unforgiven" (a Western with a conscience) and "Million Dollar Baby," as well as nominations for "Mystic River" and "Letters from Iwo Jima."

That same honest willingness to portray heroes as human--while revealing the political and societal realities surrounding them--is what makes "Flags of our Fathers" more than a compelling movie; it is a moral one, winning Eastwood the Jack Valenti Humanitarian Award for work that reaches out positively and respectfully to the world.

"Flags of our Fathers" doesn't carry the happy heroics or contrived plot twists of some of our favorite war movies--and maybe it even over-reaches a bit, as Eastwood can't resist trying to say too much. But it is clear and honest as a film can be about heroes. It is also about how many would-be heroes either die in war or are sentenced to an under-fulfilled (or under-appreciated) life back home beyond the war.

"Flags of our Fathers" asks significant questions about the hypocrisy of war, the futility of imperialism, and the false public branding of "heroic" soldiers who, in the end, are as human as you and I and will never really live up to the media-hyped image that makes them more than they really are. It made for an unsatisfying ending, but an honest one.

This story's "heroes" are honored at a glittery gala where they are presented with a white chocolate replica of their famous pose: Raising the American flag on the Japanese Island of Iwo Jima during one of the most brutal battles in American military history. As a ladle-full of bright red sauce is poured over it, the onlookers are thinking of strawberries but the three flag-raisers--two Marines and a Navy medic--are thinking about blood. This portion of Clint Eastwood's two-part saga is based on a memoir of one of the "accidental heroes" of Iwo Jima, a man who happened to be captured in one of the most famous photographic images of all time--the raising of the American flag in the midst of the battle.

The men in the picture (and one who was mistaken for a man in the picture) were whisked to America to raise funds for a war that had exhausted the good will and resources of Americans. At least two of them suffered from feelings of inadequacy and hypocrisy as their colleagues continued to fight while they were celebrated. The story is narrated by one of their sons, who knew very little about this part of his father's life until after he died.

This film, or, perhaps we should say, this first half (the second, better film, "Letters from Iwo Jima," tells the story from the Japanese point of view) raises very contemporary issues about illusion and reality, and about what we expect in and from heroes, about how wars always involve politicians sending young men (and now women) to be killed.

Yet it fails to meet its own standards, killing off all of the characters who are pure of heart and leaving only the complicated and flawed ones alive. It keeps us curiously remote from its characters, the images more powerful than the story, in an unintentionally ironic case of form over content.