Comedian Kevin James opens up to Beliefnet about the importance of education, why he loves Mixed Martial Arts fighting, and how he hopes his new movie can impact others. 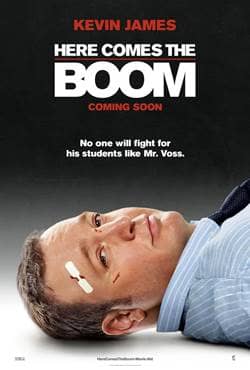 Comedian Kevin James has been a staple in Hollywood ever since his sitcom debut as the King of Queens. Starring alongside such greats as Adam Sandler, Will Smith, and Vince Vaughn has made him a movie star, and now he has set his mind to using that fame to make films that the entire family could enjoy. His newest movie is called Here Comes the Boom, a movie he co-wrote and stars in. It’s the inspiring tale of a lazy teacher who takes up Mixed Martial Arts fighting as a way to save the music program at his high school. We caught up with Kevin to talk about his love of MMA, his own experience with education, and his strong catholic faith.

You love Mixed Martial Arts, and you could have set a movie about MMA anywhere, so why a school?

I love the dichotomy between the Mixed Martial Arts world, which is so opposed to the teacher world, it feels like it’s such a different life. But, the movie also needed that. It was a great way to show the selfless act that this teacher does. He wakes himself up and is inspired to perform such a great sacrifice to lay his life down, literally, for his friends. That’s really where it came from. I always loved the sport back in the day and I got to meet a lot of these fighters and see what they were really like, and they were great guys. A lot of them had the same story. You’d think that they are just tough guys, but they’re great family men. They’re very fun, regular people with a very unique job. I really just wanted to put the human side to the ultimate fighting, MMA world, and have inspiration and a big comedy on the other side as well.

Are there MMA fighters who started out as teachers?

Oh there are plenty of them, Rich Franklin, he was actually in the movie and I’m going to have him in the DVD because his scene had to get cut out of it. But he’s a champion, this guy is not really a champion in this movie (laughs), but Rich became a champion of the UFC. He’s a great, great man and a great fighter and from what I’ve heard he was a great teacher.

Is there a particular teacher in your life that inspired you throughout this movie?

Definitely, there’s been a couple. It’s just that they were very supportive when I was going through school. School’s a tough time for kids, it can be very difficult. There’s peer pressure, there’s all this stuff, you have teachers that get behind you and support you and I can’t tell you how much of a difference it makes. I remember these teachers thirty years later and some of the principles they taught me. It doesn’t just end when school ends, and that’s what we have to remember. These teachers are really molding these kids and that cement sets. Man, you have an opportunity to shape a kid and on the flipside you could be a crappy teacher which we have those too that just let it go and not do as much. That’s very unfortunate.

This is such a hot button topic, do you have any hope that this movie will make people consider where they stand on education issues?

You know, we never get too deep politically, we want people to enjoy it. What I really would like to do is shine a light on great teachers, salute them, because I would love for the kids to have opportunities to play, I never played an instrument growing up and I realize how important it was to a lot of my friends and to a lot of other students to play an instrument and I believe kids should have that opportunity to play. We should be able to work it out where they shouldn’t have to lose their music program. I just wanted to really salute great teachers and shine a light on bad teachers, absolutely, they shouldn’t be there. It’s that simple.

You created the character of Scott Voss, how much of yourself is in this character?

You always try to put a little bit of yourself in every character, I try to bring what’s unique about me into every character I play, but look, like most people in life, I’ve become complacent in my job, or whatever part of life. At home, in relationships, everybody becomes complacent and it’s about stepping back, waking yourself up, and saying “you know what, I’ve got to put a little effort into this and maybe I can make a difference.” That ripple effect can effect so many others you don’t even realize.

Part of your life experience in this character is that you have trained in MMA, what is something you’ve learned from that experience?

That I don’t want to do it professionally (laughs). It’s a tough, tough way to make a living, it really is, these guys are extremely dedicated athletes. I dedicated myself to get in shape to be realistic to the movie, but it’s really a hard life. It was a tough life for me, but if you love it and it doesn’t feel like work to you then who am I to say? It’s just not for me, but to find your dream you do what you do.

As you’ve moved forward in your career you’ve moved away from the edgier comedy to more family friendly films. What has led you in that direction?

Number one I want to do projects that hopefully, more and more, glorify God. I don’t feel like that means every movie I do I have to be playing an angel or a priest, or what have you (laughs), but the movies I do have to show that everybody’s faulted, we have to show good and evil. You can also just make people decide for themselves, you don’t have to be so heavy handed, and it being a good movie will show people this is the way you should be to be a good person. I want to slowly get away from the gratuitous stuff, and I never really found myself too much in it, but I just want to make better movies and expand my range with that. I also want to be comfortable with my children sitting there with me and be able to look back on my career and say I feel better about the choices I’ve made.

Tell me a bit more about your faith background.

I’m a catholic christian. My father was devout pretty much his entire life and we used to go to mass all the time, and there were times in my life where I kind of faded away and went on my own and stumbled a little bit, but as I get older and I have a family I realize the gift that he gave me through God to return and see the truth, it brings me back to realizing it’s the most important thing while we are spending our time on this earth. For me it’s important to continually learn and grow and know Him, and that’s what I’m trying to do. I still screw up, gosh, more than most I’m sure, but I will keep trying to right the ship.

What attracts you to making secular films over faith-based films?

It’s basically just how I want to live my life. When I see a movie like that that’s inspirational and it’s not too heavy handed and over the top where it’s preaching to you, that’s a turnoff, but when it’s done correctly and you have fun and you feel inspired, you feel emotional about things. Those are the movies that I’m moved by, so that’s what I want to do.