A Conversation with Screenwriter Matt Charman 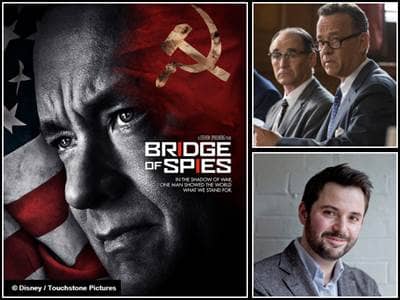 Matt Charman is fresh off an Oscar nomination for writing the film, Bridge of Spies—and he’s so happy he’s spilling secrets. His blockbuster movie stars Tom Hanks and was directed by Steven Spielberg. In it, Charman retells a forgotten 1960s era Cold War history about a New York insurance lawyer who was improbably called to East Germany to negotiate with the Soviet Union for the release of American U2 pilot, Gary Francis Powers.

Charman’s movie released to much critical and commercial success, even garnering six Academy Awards nominations that included Best Original Screenplay and Best Picture. Today the London-based playwright and screenwriter is in such a good mood, he’s happily sharing behind-the-scenes secrets with Beliefnet readers about his leading actor, his director, and the family-driven message that imbues his film with such power…

So Matt, let’s start off this way: Tell us a few secrets from the set of Bridge of Spies!

[Laughs] Secrets? OK. Steven Spielberg does not drink coffee. Never! He’s never had a cup of coffee in his life. I do drink coffee, but that’s not a very good secret. Let me see…Tom Hanks loves, loves to take selfies! He’s a big fan of selfies.

Congratulations on your Oscar nomination. What were you doing when you got the news?

Well, it was 1:30 in the afternoon in London, so I was in my office working. I sort of stopped and paced around a bit, thought “OK, I’m going to make myself of cup of tea.” Then I got the Oscars.org website up and suddenly there they were in this theatre, and they were reading out names. It was really thrilling, actually. For me this has been such an incredible journey.

Tell us about that journey.

You know, I found this as a footnote in a book, and it grew into a pitch. Steven [Spielberg] heard the pitch and asked me to write it. That in itself, all of that journey, being on the set and all the rest of it has been remarkable. To have an Academy Award nomination is remarkable and really humbling.

What was the book that you saw the footnote in?

It was a Robert Dallek biography of JFK called An Unfinished Life. In the chapter on Cuba, JFK sent someone to negotiate with Fidel Castro after the Bay of Pigs fiasco to get back 1500 servicemen that had been caught and captured. He said in the book that he sent a New York lawyer, a man called James Donovan, which kind of surprised me. He didn’t go into a lot of detail. Then in a footnote of the book he said that Donovan had first come into prominence for the part he played in the spy swap between Gary Powers and Rudolf Abel. That mention right there just made me kind of stop in my tracks. The hairs stood up on the back of my neck to be honest. I thought, “Who is this guy? I’ve got to know more about him.”

So, I started to research and piece together James Donovan’s life and the Abel case, and everything that happened to him. I met with Donovan’s family, met with his son, John Donovan, and really asked for his blessing to tell his father’s story which had been kind of forgotten, you know. It was a little corner of history that had been a little overlooked. So that’s where it started.

We like to get parents and teenagers, particularly religious families, talking about movies together. So our last question for you is this: After a parent and her teenager see Bridge of Spies, what do you want the two of them to talk about?

That’s such a great question. My brother has kids, they not quite teenagers yet but they’re almost teenagers, and what I was totally aware of when they saw the movie was the idea of the Berlin Wall—the idea of a city being divided by tanks rolling up, by soldiers getting out, by a wall being physically built through the middle of a city…A lot of young people, they don’t know that happened. They don’t know that it was possible that a city was divided by a wall being built down the middle of it. Families were ripped apart. They couldn’t see each other. They had to communicate with codes and with messages and with all different means of communicating with each other across this wall.

For me, the idea that teenagers would see this movie and realize that that was something that people did, that they lived through, and then talk about that with their parents. Talk about the idea of separation, of what happens with war and conflict. For me that was a huge part of the experience of making this movie.

I became a father nearly three years ago. It’s changed everything for me. What it’s changed for me is the concept of family and the concept of wanting to be a better person for my children, for my wife, for the world that my children are going to grow up into and be a part of. I think that has utterly infused all of the things that I write.

I was a father by the time I was writing Bridge of Spies and it’s no surprise to me that the journey that James Donovan goes on is very much a journey of a father whose children are fearful that the world is going to end, that a bomb is going to drop out of the sky, that their lives are going to be utterly changed. I think part of what he does in the movie, and part of what he did in real life, was to make the world a safer place for his children. A better place.

I feel that very keenly every day.

Mike Nappa is an entertainment journalist at PopFam.com .