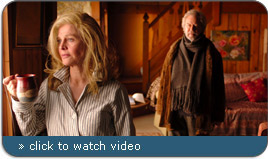 As a general rule of thumb, American movies are squeamish about aging, viewing it as something that decorousness should leave unspoken. Old people are best when neither seen nor heard, but when they must make their way onscreen, Hollywood prefers its codgers sprightly and chipper, not fumbling and failing. This year, though, two remarkable portraits of aging, and its effect on families, made themselves known: Tamara Jenkins' black-comic "The Savages," and Canadian actress Sarah Polley's debut feature as director, "Away From Her." Based on a short story by Alice Munro, "Away From Her" watches the steady deterioration of Fiona Anderson (Julie Christie) through the eyes of her caring husband Grant (Gordon Pinsent). Fiona is diagnosed with early-onset Alzheimer's, but is her forgetfulness a subtle form of punishment for her husband's long-ago infidelities?

Julie Christie has been a fixture on movie screens for more than 40 years, dating back to the days of "Darling." For all that time, she has been an actress legendary for her beauty, but it is only now that she has made that beauty part and parcel of her performance. Her Fiona, still so luminous, is a particularly tragic candidate for Alzheimer's. Fiona smiles, and it is a smile of knowingness, at first: a smile that links her with Grant through decades of a life shared together. Over time, though, her smile takes on new meanings, new subtleties; it becomes the smile of one who knows she is, herself, moving away from her, and can do nothing to stanch the flow of memory.
--Saul Austerlitz

Before I explain why Julie Christie's amazing performance as a woman suffering from Alzheimer's is not the best spiritual performance of the year (and should anyone of my age/experience criticize Julie Christie?), I must first say that her portrayal of Fiona is just that--amazing, a meticulously observed study of attempted dignity while settling into a nursing home. That said, this is not the role that should be given the award for Best Spiritual Performance. Christie's performance would not exist without the completely ignored work of Canadian actor Gordon Pinsent, who plays her husband Grant. The basis for this award is spirituality--belief and personal growth in spite of major sacrifice--and Pinsent's Grant has this in spades.

While honoring Christie wouldn't necessarily negate the impact of other performances, it would imply that her role is the sole focus of the film, which she is not. Maintaining "a little bit of grace," in the face of debilitation is one thing, but what about Grant's final, unforgettable sacrifice--bringing the woman he loves another man? The understated power of Pinsent's performance--Grant is by nature silent and averse to emotional displays--makes his character every bit as tough to tackle as Christie's. As he struggles to break through to a woman who is slowly forgetting him, while repenting for 20-year-old infidelities, we need to read what's going on behind his eyes.

If spirituality is what director Sarah Polley, in a remarkable first film, is getting at (I'm not sure it is--"Away from Her," to me, is a movie about the difficulty of love and loss at any age), the spiritual nature of it lies not in the disintegration of Fiona's mind but in Grant's painful acceptance of the woman he has loved for more than 40 years.
--Jenny Halper