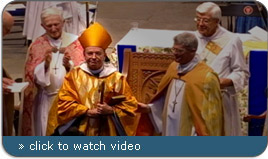 For the first time in Beliefnet Film Award history, the Best Spiritual Documentary category received the most votes from our community members, and they left no doubt about their favorite nominee: "For the Bible Tells Me So" captured the most votes by far. Our panelists, however, went for the meditative "Into Great Silence" by a similarly wide margin.

The widespread hatred of homosexuals within some Christian communities is the most lamentable thing imaginable for a religion based on the inclusive approach of Jesus and the compassion of God. But in the same Bible that emphasizes these loving motifs are passages which fundamentalists have used as weapons against gays and lesbians.

In this thought-provoking documentary, an interfaith group of clergy, including Peter Gomes of Harvard University and Nobel Peace Prize Laureate Desmond Tutu, cogently explain that all the scriptural passages used to condemn homosexuality must be taken in context and read as cultural norms of a different time and place. For example, just above the Leviticus text in which Moses says that a man being with a man as with a woman is an abomination, Moses also says it is an abomination to eat shrimp or rabbit. The theologians make a convincing case that Bible literalists are getting it wrong and are misusing texts as weapons in the culture wars.

By far the most moving sections of this documentary are its portraits of families with gay or lesbian children. Gene Robinson, the first openly gay bishop to be consecrated by the Episcopal Church, discusses his coming out to his parents. A more traditional minister couple--Brenda and David Poteat--have a much harder time accepting their lesbian daughter Tonia. Former U.S. Representative Dick Gephardt and is wife Jane are very supportive of their daughter Chrissy. Randi and Phil Reitan, Lutherans from the Midwest, stand by their gay son Jake and even deliver a letter of protest to the leader of a fundamentalist Christian group in Colorado. And following the suicide of her daughter Ana, Mary Lou Wallner becomes an outspoken opponent of homophobia.

Daniel Karslake has done us all a great moral service by presenting the tolerant and loving point of view of open-minded Christians, a group that doesn't get a lot of press and so some people think they don't exist. Christianity in America is in the midst of important discussions about God, faith, and sexuality. This movie is an important contribution to the conversation.
-- Frederic and Mary Ann Brussat

For The Bible tells Me So is that rare thing – a campaigning documentary that manages to be sensitive to different sides of an issue, being honest about the complexity of interpreting Scripture through 21st century eyes, and providing several utterly compelling human stories that linger in the mind long after the film is over.

It's wide-ranging in its reach – with a gay bishop, a woman whose lesbian daughter took her own life, and a very cool Lutheran family who are prepared to be arrested in the cause of seeking justice for their son and the community he represents among those who fall under its gentle and humane gaze.

While some parts of the film strike notes that seem out of place (a couple of moments where it appears actors are used in re-enactments are a little cheesy, and there are one or two threads that are not followed through – such as the almost complete lack of reference to the crisis in the Anglican communion over theology and sexuality), the film is both visually interesting, and probably the most comprehensive documentary yet made about this desperately sad aspect of the clash of uninformed traditionalism with the best of what Christian faith can express.

Many of the people interviewed speak with articulate voices, and their courage is obvious; I was, thankfully, left more inspired by them than angry at those who oppose justice for GLBT people. But the film is not disparaging of its targets – indeed, one of the protagonists is a former self-acknowledged fundamentalist homophobe who speaks elegantly of the process by which she left her sincerely-held prejudice behind. The film-makers want to allow the same possibility of change to her fellow travelers; it is a sign of the quality of 'For the Bible Tells Me So' that it does not fall into the common trap of 'liberal perfectionism', instred raising the possibility that we are all 'works in progress'.

It took one of the people involved in the film to experience her daughter's suicide to challenge her homophobia; hopefully in the future, this film may do that job for others, sparing them the tragedy that the church that bears the name of Christ the peacemaker can paradoxically contribute to the suffering of human beings.
-- Gareth Higgins