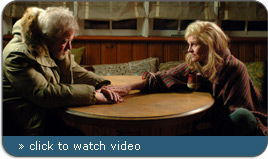 When couples vow during their wedding ceremonies to love each other "in sickness and in health," most likely they aren't thinking about Alzheimer's. More than five million Americans currently have this progressive brain disease that causes severe problems with memory, thinking, and behavior, so that patients become incapable of caring for themselves. It is the seventh-leading cause of death in the U.S. Dr. Lewis Thomas once described it as "the worst of all diseases, not just for what it does to the patient, but for its devastating effects on family and friends."

In "Away from Her," Fiona (Julie Christie) begins to experience memory lapses. She tells Grant (Gordon Pinsent), her husband of 44 years, that she thinks she is beginning to disappear. Over his objections, she insists on entering a residence facility for Alzheimer's patients. She seems to have an easier time adjusting to their changed situation than he does. She becomes attached to another patient and ignores Grant during his visits. Grant eventually realizes that in the name of love, he has to let go.

Had writer/director Sarah Polley chosen only to portray the effects of Alzheimer's, "Away from Her" easily could have become a "disease of the week" movie. Considering how many families may soon cope with the disease in the Baby Boomer generation, that focus would not have been an entirely bad choice. But this film gives us so much more. It shows us how the bonds of love hold this couple together, enabling them to face challenges that test every ounce of their caring and commitment.

All the world's religions point to the importance of love, recognizing that our love of each other is a mirror of the Creator's unconditional love of the Creation. Movies offer many courses on love--first love, romantic love, married love, family love, love of friends. We go to these films looking for something we can believe in, something to sustain us in good times and bad times. For its inspiring portrait of a love that endures, "Away from Her" deserves to be Beliefnet's Best Spiritual Film of 2007.
-- Frederic and Mary Ann Brussat

"Away From Her" is the latest in what seems to be a burgeoning genre of movies about memory loss. Like some of the better films that have tackled this theme, it explores the relationship between memory and identity, and thus it at least has the potential to say something profound about the role that memory plays in our spiritual lives.

But despite some good performances, the film never quite achieves the profundity it is looking for. Writer-director Sarah Polley, who was 27 when the film was made, has been praised in some quarters for being mature beyond her years, thanks to her sensitive handling of this tale of an elderly married couple separated by Alzheimer's. But there are times when the film feels very much like the feature directorial debut that it is.

For one thing, there is the film's questionable portrayal of Alzheimer's itself. There is nothing in this film as bracing, or distressing, or deeply upsetting as, say, the depiction of Iris Murdoch's mental deterioration in "Iris"; instead, alleged Alzheimer's victim Fiona Anderson (Julie Christie) reads a book warning of negative symptoms that we never actually see, and Fiona herself maintains her grace and poise throughout.

The film has a few bizarre story elements that can be traced to Alice Munro's original short story, "The Bear Came Over the Mountain." But most of its more questionable and self-conscious bits are original to Polley's script: out-of-the-blue political statements, gratuitous digs at American pop culture, senior citizens who puzzle over which four-letter word "the kids" would use to describe their situation, and a sportscaster with dementia who provides all-too-cute comic relief.

Memory is essential to our spiritual journeys--without it, there would be no stories to tell, no relationships to work on--and there were few scenes in any film last year as potentially chilling as the moment when Fiona realizes that a piece of her mind has evaporated, and she remarks that she is starting to "disappear." But "Away From Her" is too caught up in its own conceits to resonate the way it ought to.
-- Peter T. Chattaway