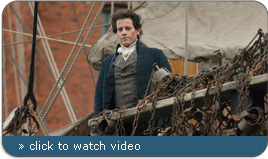 View Results
For this year's Best Spiritual Film contest, the Beliefnet community chose "Amazing Grace". It wasn't the best known of the nominees or the highest grossing at the box office, but our panelists and community members agreed: "Amazing Grace" is the best spiritual film of the year. And it wasn't even close, winning both votes by a comfortable margin.

"Amazing Grace" is one of those films about the past that resonates so much with the present that, take away the costumes, it could be set today. It's about what happens to a man when his faith and his spirituality go from being expedient lip-service to being uncomfortable daggers that drive him to make a wildly unpopular stand.

The man was British parliamentarian William Wilberforce, and the issue was the human slave trade--which was seen by most politicians as an economic issue, not a moral or spiritual one. (Heard that one lately?)

There are two extraordinarily wonderful things about this film. First that it was made as a mainstream film by talented filmmakers who may or may not have shared Wilberforce's Christian faith. This allowed it to be a universal exploration of what happens to a person when his or her faith refuses to be compartmentalized and instead becomes the motivating force in his life. The direction, the script, and the acting are outstanding . And while Wilberforce's faith is fully explored, the film doesn't proselytize a specific faith as much as it rouses viewers to do what they know to be right, no matter what their faith, no matter what the consequences.

The second thing I loved about this film is that it isn't a "quick fix" story. Wilberforce's battle to outlaw slavery in Britain cost him years, money, friends, and his health, and required the spiritual values of humility, tenacity, and selflessness, as well as a commitment to justice. He was driven by the idea that not one more human being should die an agonizing death in the hold of a slave ship or be "owned" by another.

We've all become so inured to politicians using their faith as a campaign tool that it seems impossible to believe that a politician might actually put his or her conscience above political expediency. "Amazing Grace" reminds each of us that the same goad that shoved Wilberforce out of his comfort zone is the one that is likely prodding us even now.
--Sharon Linnéa

"Amazing Grace" should be called a good spiritual film of 2007, rather than the best. The William Wilberforce biopic is a circular blend of the 19th century abolitionist's force in ending the British slave trade and his religious conversion to evangelicalism. The film embodied spirituality through Ioan Gruffudd's portrayal of Wilberforce--as well as those of supporting cast members like Albert Finney as John Newton, the writer of the eponymous hymn.

The film doesn't lack spirituality, but it does lack a hold on a wide audience. For one, it came out in February to coincide with the 200th anniversary of the end of the British slave trade, which was a good move in providing a message of relevancy at that time. However, as the film audience looks back at the year of films, it is difficult to recall "Amazing Grace" in the relative consciousness.

That is partly because other films with strong spiritual messages, such as "Juno" and "The Kite Runner" had much more recent releases and wider appeal. The Wilberforce message doesn't have boundaries, really, as it was to make the world a better place, through action and example rather than lecturing.

But "Amazing Grace" separates itself from some American filmgoers with its historical biopic realm set in Britain over 200 years ago, making it difficult to connect. Wilberforce might be a household name in the U.K., yet it wasn't in the U.S. at the time of the film's release and still isn't. That lack of a bond is reason enough not to be considered best spiritual film of 2007.
-- Sara Shereen Bakhshian

Half a Great Film

Amazing Grace, this year's big "Christian' film" was marketed in the hopes that it might be another "Passion of the Christ," but its relatively low box office numbers suggest that people are more interested in violent theories of the atonement than in ending slavery. I thought "Amazing Grace" was half a great film: We learned lots about William Wilberforce, but very little about slavery that we didn't know before the film began.

The attempt at addressing the historic injustice of the slave trade through a semi-biopic tale of the life of a British Christian hero is admirable, but the sentimentalized portrayal of Wilberforce--the Dr. Doolittle of the moral rectitude movement, who is at one point shown lying rapturously on the grass of his estate reveling in the presence of God, and whose characterization by Ioan Gruffudd left me fearing he would actually start talking to a passing sheep--does not delve anywhere near deeply enough into his complexity, or even of his conversion to anti-slavery. The historical inaccuracies are most glaring when Wilberforce brings a boatload of the great and the good down to the docks to see a slave ship; historians of the period were aghast at the fact that the film suggested these people, who would have been very familiar with the realities of their own form of human trafficking, were surprised enough to care.

Worse than this, slaves themselves are given very little voice in this movie--it is a story of liberation in which the oppressed are hardly ever seen. Ultimately, in spite of the good intentions of its makers, "Amazing Grace" told an African story through through Western eyes.
-- Gareth Higgins