Will Smith<br>('The Pursuit of Happyness') 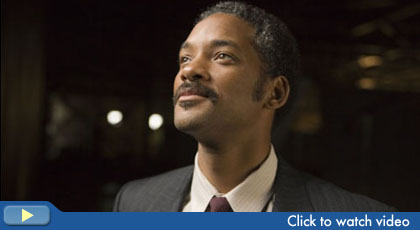 Screenwriting guru Robert McKee can tell you exactly how many pages into the script you have to establish the endearing nature of your hero and exactly how many pages later he has to have his initial triumph, his setback, his epiphany, and his ultimate redemption/resolution. At this point, the inherent sense audiences have of the beats of a studio feature film, that understanding of story structure that goes back to the days of sitting around the campfire re-enacting mastodon hunts, has been refined and hardened by decades of films that, for better or worse, follow the same pattern, with just enough failure carefully calibrated to make us feel good about the success. But "Pursuit of Happyness," the true story of a man who went from homelessness to being a multi-millionaire stockbroker while caring for his son, does not have the usual feel-good arc. Even though it omits some of the real-life obstacles and setbacks faced by its main character, it is still more grounded in the reality of what happened than in the established beats of movie narrative and the conventions of movie story.

Will Smith--playing the main character, Chris Gardner--is willing to take the risk that even his considerable charms and those of the personable character he plays may not be enough to keep audiences from growing impatient to get to the good stuff. Smith has the courage to turn the pilot light down on his powerful movie star charisma and let us see that despite Chris' intelligence, optimism, and drive, he is vulnerable and scared. And he makes it clear that what matters to him is his relationship to his son. That always comes first. Smith's natural easy on-screen chemistry with that child--played by his real-life son Jaden--gives the movie an added resonance; it is clear that he shares with Gardner the values that the movie exemplifies.

As down-and-out medical equipment salesman Chris Gardner, Will Smith is charged with the balanced portrayal of a man driven to extreme desperation while, at the same time, maintaining a grounded level of believability required for a movie inspired by actual events. Throughout the film, Gardner and his son--played skillfully by Smith's real-life son, Jaden Smith--are faced with hardship after hardship, enduring whatever life throws at them using a combination of their will to survive and Gardner's unrelenting drive for success.

"Pursuit" offers up a heaping helping of inspiration in its message, but Smith's performance lacks the kind of intensity required to draw out the emotional turmoil and depth of meaning in his character's actions. Smith relies heavily on the physical aspects of his character; there are scenes in which Gardner is running away from or toward something; he solves a Rubik's cube in record time, and even fixes a malfunctioning portable bone density scanner in a dimly lit homeless shelter to make it salable. All of these are attention-grabbing, sometimes stirring experiences, but they illustrate the tenacity and incredible ability of Gardner as a provider rather than the transformative power this struggle is having on his soul and spirit.

In the end, Smith does a decent job of showing us just how grateful Gardner is for what he's received, but the odd stoicism and denial of emotional insight make his character's transformation less satisfying, and, ultimately, his performance less convincing.