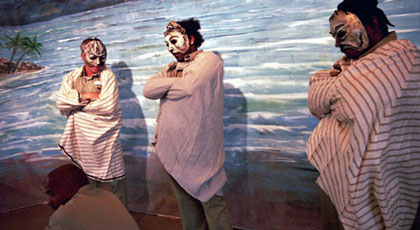 There is hope for every soul. That's the message of "Shakespeare Behind Bars," and it's one that resonates with our community members, who voted to give the film this year's People's Award for Best Spiritual Documentary. Our judges, however, went for a decidedly less upbeat film, choosing "An Inconvenient Truth" and its message of impending environmental disaster for the Judges' Award in the category.

In "Dead Man Walking," Sister Helen Prejean is asked why she ministers to a murderer in prison. She replies, "I'm just trying to follow the example of Jesus, who said that every person is worth more than their worst act." "Shakespeare Behind Bars" operates on that same premise. This spiritual documentary film takes us inside the Luther Luckett Correctional Complex in La Grange, Kentucky, where we are encouraged to see the prisoners for their talents and gifts not for the acts that got them there. The warden has set up programs designed to prepare the prisoners for re-entry into the world. One of them, an acting ensemble, has been doing an annual production for seven years.

This year the ensemble is staging "The Tempest" because of its thought-provoking treatment of redemption. Of course, it takes place on an island, and what is a prison but a place where individuals are confined, isolated, and separated from the rest of society. The filmmakers take us to rehearsals but more importantly, they help us get to know the actors as they pour their hearts out in personal interviews. We hear them struggling with the aftershocks of their crimes, discovering parallels in the play to their own situations, and wrestling with what it means to be "set free" and redeemed.

Programs designed to bring out the best in prisoners, to enable them to face their crimes and move past them, are being tried throughout the American penal system. "Shakespeare Behind Bars" is an inspiring work that demonstrates the value of such initiatives. The soul-searching of these men comes across as genuine; the acting provides them with a catharsis that is both healing and hopeful. They are moved by their participation in "The Tempest" to consider afresh their ideas about guilt, crime, power, and forgiveness--and so are we.