Catch a glimpse of this documentary, narrated by Nicole Kidman, about the Lost Boys of Sudan. 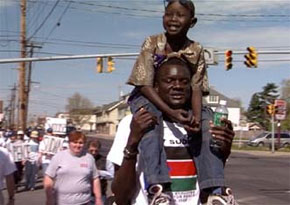 "God Grew Tired Of Us" tells the story of three of the "Lost Boys" of Sudan--a group of 25,000 children, ages 3 to 13, who fled the famine and war in their villages, traveled together for five years, and eventually made it to a United Nations refugee camp. Nearly 4,000 of them--including the three profiled in "God Grew Tired Of Us"--later settled in the United States, where they built active and fulfilling new lives but remain deeply committed to helping the friends and family they have left behind. The film follows the three as they journey to America and are faced with its unfamiliar ways. Even a trip to the supermarket, with its endless array of choices, is baffling to them.

The documentary is narrated by Nicole Kidman, and its producers include Brad Pitt. Presented by Newmarket Films, "God Grew Tired Of Us" is a National Geographic Films/LBS Production. It opens in New York and Los Angeles on Jan. 12, and moves to wider release on Jan. 19.