The comedian and his costar discuss their film about an American comedian going to India to find out what makes Muslims laugh. 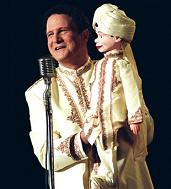 How to cope with a catastrophic terrorist attack? Like so many of us, Albert Brooks spent a long time in shock, unsure of how to move on.

"After Sept. 11, I sat in my house for a year and was scared. All that was happening in the first year was, 'The next one's coming tomorrow. Maybe this weekend. Maybe on Monday,'" he said at a recent roundtable interview with reporters. "One day, I thought, 'This is insane. What is our life like? We're going to hide until we're killed.'"

Like many people, Brooks responded to his fears with a decision to return to the routines of everyday life--though normalcy for him is not what it is for most of us.

"Normalcy, in my mind, is to deal with it in a motion-picture comedy," he says. "That's what normalcy is."

The result of that supposed return to normalcy--"Looking for Comedy in the Muslim World"-- is anything but conventional. In it, Brooks plays a comedian named Albert Brooks, who is sent on a mission by the U.S. government: In an effort to better understand the Muslim world, he is to travel to India and Pakistan to discover what makes Muslims laugh.

Shot on location in India, the country and its people play a central role in the film--though Brooks fails miserably at the task he was sent to do. He spends most of the time asking strangers straight out, "What makes you laugh?" or telling jokes and wondering why no one got them.

Though Brooks may say he made "Looking for Comedy" just as a means of emerging from the post-terrorist-attack doldrums, he also acknowledges that he had a more serious intention as well.

"One way to deal with it is not to even talk about a world after 2001," he says, referring to Sept. 11. "I just want to find a way to just get in this door, just to be able to stand up and say, 'I'm acknowledging the new world here, and maybe we can get a few laughs for 98 minutes and then we'll go on.'"

Despite his intentions, fears about the film's potential to generate controversy almost lead to its demise. Sony had been set to distribute the film, but the studio asked him to remove the world "Muslim" from the title in the wake of last year's controversy over a Newsweek story, later retracted, about Americans abusing the Koran at the Guantanamo Bay prison for terror suspects. When Brooks refused, Sony pulled out, but Warner Brothers Independent later picked up the film.

But the film's premise raised eyebrows among more than just studio executives. When first presented with the possibility of auditioning for "Looking for Comedy," Sheetal Sheth--a young American actress from an Indian family--feared the worst, though she was quickly won over by Brooks and ended up with the most prominent role in the film aside from Brooks's.

"I was like, 'Ugh, someone's doing a movie about India,' and I was all nervous and protective," Sheth says. "And then I met him, and honestly was so struck about how specific he was about staying authentic and real, because he asked me so many questions that were so specific and so nice, and I said I want to be part of this because he's going to do it with the respect and dignity it needs to be done with."

Sheth sees no reason for people to worry that the film will be offensive or controversial.

"It puts everybody in such a nice light, and is so intelligent," she says. "If anything, it makes fun of Americans, I think."

"Everywhere on the planet, somebody's talking about someone else..."
Read more on page 2 >>

Still, if Brooks's goal was to make sense of the world after 9/11, the film raises some obvious questions: Why does his character fail to learn anything about Muslim comedy--or even encounter any Muslim comedians? And why go to India, instead of the Middle East, in the first place?

Brooks is ready for the questions.

"The purpose of the movie was always... to take on these highfalutin dramatic projects and have no clue how to do it," he says. "This could be an interesting 12-part HBO show where you really do go to different countries--then it becomes a pure documentary. But it's the idea of my character having the inability to find this out."

On the decision to shoot the film in India, he says there weren't too many options available to him--as an American and a Jew--in the Middle East.

"When the president of Iran says they want to wipe Israel off the map on Wednesday, Thursday he's not saying, 'However, let the Jew filmmaker come in, and we'll give him free access to the sites,'" Brooks says.

Those Arab countries to which he might have had access, like Egypt or Morocco, didn't provide the sense of "jeopardy" the story needed, since they are places where tourists from America go regularly. Setting the story in India allowed him to use Pakistan--where his character is supposed to go, before hitting diplomatic snags--for that sense of danger.

Sheth adds that there was more to the India decision than mere logistics.

"That's the point of the movie," she says, "in the sense that the government and the people are so ignorant to think that's where they would send him. That's the joke."

While Brooks plays a neurotic Jewish-American comedian who is the proverbial fish out of water in India--in other words, himself--Sheth plays the star-struck, bright, eager-to-please assistant he hires to help him navigate Indian culture and complete the project. Though not native to India like her character is, Sheth found that stepping into the role of a provincial young Indian woman was not such a leap.

"It's where my family is," she says of India. "I love it as much as I love being here. I spend so much time there. There's nothing like the people there. The heart is unbelievable."

The very question of what makes Muslims laugh makes Sheth laugh, since, as she says, it's ultimately unanswerable, whether the setting is India, Saudi Arabia, or the United States.

"I can't tell you what you guys are going to laugh at as much as I can tell anybody from India or Pakistan or anywhere in the world," she says. "We all laugh at different things, we all are moved by different things."

Brooks, though, says he learned some universal truths about humor from the experience. As members of the India-based film crew warmed up to Brooks, they tried out some of their own humor on him.

"The Hindus, the butt of their jokes is the Sikhs, they've got Sikh jokes. There was one joke I didn't quite understand, it was like, 'Two Sikhs played a chess game, yes? They simply did not play,'" Brooks says. "And then we had a Sikh driver who was telling me the Muslim jokes."

"So it seems to me that everywhere on the planet, somebody's talking about someone else," Brooks says.

Regardless of who is or isn't getting made fun of, Brooks says, there is a serious message in the film.

"I'm just am shocked and continuously surprised that there are no public relations that this country does. I can't stress enough the importance of human to human contact," he says. "Kennedy says `Ich bin ein Berliner' and Germans loved us for 20 years!"

And the lesson in that?

"I just hate looking at the world through the eyesight of a B1," Brooks says. "There's no PR, there's nothing going on. We spend a trillion [dollars] creating bombs; why not spend a billion to get 1,000 people on the ground to just schmooze!"