Beliefnet
TV's fall schedule this year has become the season of God--or someone who pulls a lot of His best tricks. There are a few common themes (God, for one thing, prefers to contact young women), but they each have their own take on the Almighty. A brief overview: 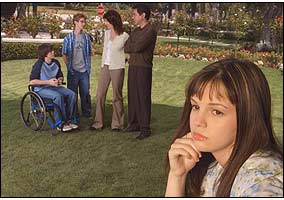 The Girardi family is still trying to sort things out a year after the accident that has paralyzed their dreamy 21-year-old son Kevin. Kevin's sister Joan is set adrift by her Mom and Dad's grief, but gets shaken to attention when God begins appearing to her in the shape of a fellow teenager and a school cafeteria worker. Unable to rationalize the visions away, she takes the Lord's suggestions, and ends up helping Kevin out of his self-pitying funk.

The concept is carried out with the minimum of fuss, allowing the seasoned actors (Joe Mantegna and Mary Steenburgen play Joan's parents) room to develop the theological ideas credibly. And to the show's credit, God doesn't helps Joan's father, the local police chief, snare the murderer who's on the loose. 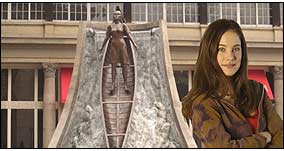 Another young woman is visited by visions, this time Jaye, who has returned to greater Buffalo, N.Y. with an Ivy League philosophy degree and no idea of what to do with her life. Lucky for Jaye, the knick-knacks in the Niagara Falls tourist trap where she works instruct her to perform deeds whose purpose is revealed only at the end of the episode.

The show proceeds at breakneck speed, lashed onward by a rock score and constant, loopy revelations about Jaye's crassly dysfunctional family (and by crass situations and language). But the show works in a positive message for confused adolescents: even when life seems random, destiny is at work, and as the young folks say, it's all good. Does this make the talking gew-gaws God? Like any 16 year old, the show is too smart-alecky and too callow to say. 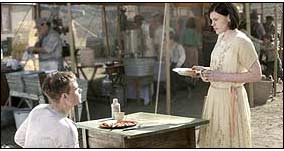 Set among carnival folk travelling through California during the Depression, HBO's new series treats religion like a form of Americana, mixing faith healers and fire-and-brimstone preachers, fortune-tellers and prayer meetings into something resembling a spiritual "Twin Peaks." The two lead characters, a minister and an escaped convict, are tortured men, pulled toward faith by the supernatural powers they possess, but haunted, despite those powers, by doubt. God, or some powerful being, directs the proceedings through a charismatic dwarf who runs the carnival.

Often ponderous, and full of signs and wonders, "Carnivale" shares with the network shows the conviction that human beings must be forced to do the right thing. 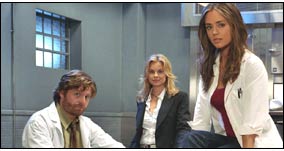 Like "Joan of Arc," this vehicle for "Buffy the Vampire Slayer" veteran Eliza Dushku combines a homocide procedural with the other-wordly. Tru, a morgue attendant, gets supernatural hints about who killed her corpses, and the chance to head off their murders when she's mysteriously returned to the morning of the crime. The idea opens the door to metaphysical exploration, perhaps for nought: scheduled opposite "Friends," fans on Fox's website are already betting on the show's cancellation date three weeks before its premiere.