The Superhero for All Times

Two Canadian filmmakers wow a convention of religion scholars with their film about Jesus battling vampires.

Beliefnet
Jesus Christ is many things to many people, but let's face it: He's the ultimate superhero. He walks on water, heals the sick and casts demons into swine. Unlike Spiderman or even Superman, J.C. rises from the dead. So when I first heard about the independent Canadian film, "Jesus Christ, Vampire Hunter," my immediate reaction was, Of course! And from the film's title--unlike the suspiciously titled leadership book, "Jesus, CEO"--I could tell the vampire-hunting Jesus would be a good guy.

The movie is set in contemporary Ottawa as the Second Coming is getting underway. Jesus has returned to judge the living and the dead, but first he's called on by a pair of local priests to vanquish an army of lesbian vampires. As Father Alban presents the problem, "If these leeches prevail, the faithful will no longer fear going to hell!" Unmoved by this appeal, Jesus nonetheless vows to defeat the vampires after they kill the two priests.

To get an idea of the kind of treat that follows, imagine that John Waters and Russ Meyer made a B-movie together about Judgment Day. "Jesus Christ, Vampire Hunter" relies on low-budget camera tricks, Three Stooges-esque slaps, pops and bonks and completely dubbed sound. When an unholy bloodsucker sinks her teeth into a victim's neck, it sounds like she's chomping an apple. 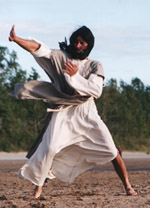 Indeed, this was no crowd of black-clad, tattooed hipsters. As I settled into my seat, bespectacled, bearded academics wearing wallabies and tweed jackets, reeking of pipe smoke, filled the air with "insofar ases" and "presupposing thats." But it turned out to be Demarbre's best audience yet, the 30-year-old Ottawan told me later. "They responded to every biblical reference and laughed at every joke. Most audiences don't get it when during the final fight scene, Jesus turns the other cheek."

There are plenty of other references for Bible geeks. The script by Ian Driscoll is surprisingly smart. Demarbre told Driscoll to read the New Testament, but he didn't consult any other sources and was guided only by his and Demarbre's take on the Christian faith. When Jesus offers a priest a glass of water he's turned into lemonade, the priest asks, "Will there be enough?" Jesus replies, "Oh, there'll be plenty." When Father Eustace gives Jesus cash to buy clothes, the priest explains that the money is Jesus' anyway, because "it came from the collection plate."

In a more serious vein, there's a depiction of the Good Samaritan story, in which Jesus, having cut his hair, shaved his beard and donned a t-shirt and jeans to fit in better, lies bleeding in a gutter after losing a fight to Johnny Golgotha, the head vampire. Jesus pleads for help from passersby. First, a priest ignores the Son of God, then a cop. Finally, a transvestite prostitute takes Jesus home, cleans him up, and gives him a warm bed. At the end of the film, Jesus delivers a don't-follow-me, follow-my-teachings sermon that would have a member of the Jesus Seminar dabbing a tear.

The overall tone, however, is decidedly light. When a gang of baseball bat-wielding atheists encircles the Lord, Jesus crouches in a karate pose and growls, "Let's get on with the conversions." In the heat of another fight, Christ grabs a pint of beer, blesses it to render it holy, and tosses it in the faces of his fanged foes, who scream in agony. God speaks to Jesus through a bowl of ice cream, and later reminds his Son, "Call your mother. She misses you."

But like any mother who knows her boy, Mary doesn't wait to hear from Jesus. She contacts him, voicing her maternal concerns through a kitschy Mary nightlight. (When Jesus tells her he's helping some lesbians, Mary replies: "Oh, God love them. They get so much done in a day, don't you think?")

Jesus is played by Phil Caracas, the star of Demarbre's award-winning Harry Knuckles spy action series. After he cuts his hair and beard, Caracas's Jesus resembles Henry Winkler in "Happy Days." "Phil is the Fonzie of Ottawa," Demarbre said, "so his Jesus is cool, the strong, silent type." Caracas delivers his lines perfectly straight, making it hard to describe just how funny some of them are. In the film's goriest fight scene, the raving mad scientist Dr. Praetorious beats Jesus to a bloody mess with human kidneys tied to his hands like boxing gloves. The Lord hops up after his beating and says: "Not even this separates you from my love." I asked Demarbre if Caracas modeled his Jesus after any particular actor. "Michael Caine, definitely," Demarbre said. "He really tried to capture Michael Caine's intensity."

Still, Demarbre wanted to emphasize Jesus' vulnerable side. "I didn't want him to be too superhuman," Demarbre says. "A hero has to be a real guy, who really feels the punches. The best film heroes are those who start off really cool and kick some good ass, and then they fall. And it's only after they're beat and get back up that they become true heroes." Like many superheroes, Jesus needs a partner. He teams up with a retired masked wrestler named El Santos, "the Saint," a character who fought vampires in old Mexican wrestling films. (Demarbre added the "s" to Santo because the original is copyrighted.)

The morning after the screening, Laurel Zwissler, a doctoral student at the University of Toronto, presented a paper at an AAR session called "Entertaining Evil." Zwissler argued that "Jesus Christ, Vampire Hunter" is essentially a Christian text that presents Christ as a hero much as Jesus' first-century Jewish followers did. "They wanted to describe Jesus in the best terms possible," Zwissler said. "So they saw him as Moses, Joshua, Samuel, David, Solomon, Elijah, and Elisha. For them, Jesus was a combination of these past heroes, and yet he was greater than all of them."

Zwissler pointed out that "Jesus Christ, Vampire Hunter" draws on such B-movie genres as Italian horror, Mexican wrestling, and Chinese martial arts, as well as American musicals, assigning Jesus the characteristics of contemporary heroes. "Jesus is Bruce Lee, Shaft, and John Travolta all rolled into one," she said. "The filmmakers are saying, 'Stick Jesus in any situation and he will triumph. He'll be a hero in every film genre.'"

Pitting Jesus against vampires is natural, Zwissler told me. "In horror films," she said, "Christian elements are always the weapons used against vampires. To fight a vampire you call a priest, you get holy water, you use a cross. So if the ephemera of Christianity can get the job done, then Jesus Christ, as the source of those symbols, will be even that much more effective!"

A former film major at Carleton University in Ottawa, Demarbre is untutored in the debates about homosexuals or heirarchy that rage inside Christian circles today. He and Driscoll are more likely to be caught discussing theology in a coffeehouse than in church. If their movie has a message, it comes when a priest turned vampire tells Jesus that the lesbian victims are "deviants," to which Jesus replies: "There's nothing deviant about love." Coming amid the film's overwhelming silliness, however, it never crossed my mind that Demarbre and Driscoll, who is a comic book writer as well as a screenwriter, were spurred by anything more than satire.

Until recently, the film has received mostly positive responses. Demarbre, a Catholic, didn't want his film to offend the faithful. "My wife goes to church every Sunday, and both our families are Christian," he said. "I kept thinking, I still have to have supper with her family."

The announcement that "Jesus Christ, Vampire Hunter" is coming out on DVD, however, has generated a flood of mail that the distributor forwards to Demarbre. "I get letters that say stuff like, 'I don't need to see your movie to know I'm offended by it,' as well as threats to boycott video stores that carry it." But Demarbre is heartened by the showing in Toronto. "Hey, man. We were just shown at the American Academy of Religion!"

Not that he fully understands his own boast. Demarbre anonymously attended Zwissler's "Entertaining Evil" session, and afterwards, I asked him how he felt about a roomful of religion scholars analyzing his film. "It was very interesting," he said. "But I was puzzled by one scholar's question. She asked, 'Why was Jesus in the film so skinny?' And I was like, 'What? Was there a fat Jesus?' I just didn't get it at all."