Attainment of nirvana still goal, but not so important that you should miss cousin Vijay's Bar Mitzvah.

Beliefnet
Reprinted with permission from SatireWire.com.

New Delhi, India (SatireWire.com) - Hinjew leaders today conceded the merger of Hinduism and Judaism has not worked out as planned, as instead of forming a super-religion to fight off the common Islamic enemy, they have instead created a race of 900 million people who, no matter how many times they are reincarnated, can never please their mothers.

"On paper, this was a textbook alliance - two smaller competitors join forces to take on a larger adversary," said New Delhi resident Chandra Gopan. "But the synergies are just not there. For instance, I still believe I must pursue my own dharmic path to ultimate happiness, but when I get there, I just know my mother will find something wrong with it." 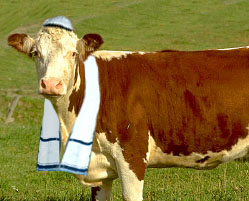 Military officers, in particular, have found assimilation difficult. "We were all excited at first, especially about the Kama Sutra parts, but it's not going to work," Israeli Col. Benyamin Telluk said at a joint press conference with Indian officers. "I mean, just this morning, I was showing Col. Bhadrak here pictures of my family, and he said my wife was a cow."

"I said his wife reminds me of a cow," Bhadrak explained.

"It's a compliment!" answered Bhadrak.

Hinjews across the world, meanwhile, said they also were too busy dealing with integration to worry about Pakistanis, Palestinians, or any other opponents.

"Surprisingly, it's not the big issues, like is there one God or are there many? It's the little things," said New York City Hinjew Nathan Feldman. "Like my Hindu half acknowledges that this world is full of suffering, but my Jewish half just goes on and on about it."

SO, WHAT'S WRONG WITH A NICE HINJEW GIRL?

However, most agreed that even if other issues could be overcome, maternal obstacles to Hinjuism would always exist.

"Yesterday, my former self was killed in a car accident," said the late Gori Bhupendra of Madras. "But I had good karma, so I was reincarnated this morning into the Vaisya caste. To me, this is a step up, right?"

But then Bhupendra's former Sudras mother tracked him down.

"She says, 'Oh, Vaisya now, is it? Very nice. Of course, your former brother is a Ksatriya, but he was always an overachiever.'"

"It wouldn't have worked anyway," said Imam Satra Mohammed of Damascus. "The first time we drank the communion wine, we would have all had to kill ourselves."