Beliefnet
"Watch this, watch this!" says Pete Halvorson over a high-pitched whir coming from the TV. "When the doctor pulls the drill out of the skull you're going to get a good look straight into the third eye!" 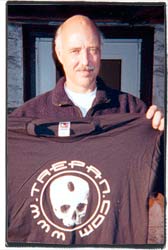 Halvorson is showing me one of the four cranial operations he filmed at a hospital in Mexico in August. I don't consider myself particularly squeamish, but I found myself glancing away from the TV. I hoped Pete didn't think I was bored.

As I turned back to the screen, the whirring stopped, the surgeon removed the drill and a nurse suctioned away the blood and bone fragments. What I saw was a hole that went clear through the skull and stopped just shy of the brain's protective membrane. What Halvorson saw was nothing less than history in the making: a trepanation surgery, performed to help a patient expand her consciousness, and performed at her own request.

Trepanation dates back to the Stone Age. It was practiced by physicians of the ancient world for light head wounds and in the Middle Ages to release evil spirits. But modern Western medicine frowns on trepanation (except to relieve pressure on the brain, after which the piece of skull is replaced), and no doctor in the United States or Western Europe will seriously discuss it, much less perform it, as an elective procedure.

Halvorson, a 54-year-old jewelry designer whose own trepanation hole is visible as a dent in his mostly bald head, believes trepanation can dramatically improve the quality of life for 80 percent of all adults. The benefits he cites include increased mental abilities, more energy and drive, and a heightened self-awareness and a keener perception of reality. He also believes trepanation can help cure depression, stress-related diseases, even multiple sclerosis.

In June, after years of searching, he finally found Dr. David Kirsch in Monterrey, Mexico, who was willing to perform the operation. Eventually, he says, the hospital will accommodate the hundreds of requests Pete receives through his website (www.trepan.com) "This is just the beginning," Pete says. "My long-term goal is to make trepanation available at every outpatient clinic around the world, so that no one will ever have to do what I was forced to do."

In his early 20s, Pete grew distressed over changes in his life--changes some would count as the trappings of adulthood. He felt lethargic, depressed and disconnected. His studies, once a joy, became a chore. "I could barely read through a single page." After dropping out of college Pete, like many young people in the late '60s, embarked on a "quest for expanded consciousness."

In Amsterdam, he met Bart Huges, a former medical student at Amsterdam University who had written a book called "Trepanation: A Cure for Psychosis." Huges, who had been advocating the procedure as a means to permanently increase one's consciousness since the early '60s, had developed a following and attracted publicity ("most of it," Pete says, "was in the tabloids and inaccurate").

In 1972, the 27-year-old Halvorson sat in a small room in Amsterdam before an array of bandages, a hypodermic containing the anesthetic Xylocaine, a scalpel, a drill and four bits. Then, as he'd practiced countless times, he numbed his scalp, made an incision and, hands above head, bored a 3/8 inch hole into his skull. He ran the electric drill by a foot peddle, while watching in a mirror. There was a lot of smoke and blood, which he deflected from his eyes with a tent around his face. The procedure took about an hour. "The first thing I noticed was a sense of euphoria," he recalled. "It's an intense high, a sense of happiness and well-being, nothing wild like LSD. And it's a permanent high that never goes away.

"It's as if somebody suddenly turns on a light," he added, "and you realize, `Wow, I've been in the dark all this time!' It's the opening of the third eye."

The concept of the third eye goes back to ancient Hindu literature, Halvorson says. "The third eye of Shiva was a source of wisdom and illumination, depicted as a fountain coming out of his head. Trepanation was prevalent in those days as a religious practice, and the notion of opening the third eye was a literal reference to trepanation. But over the years the third eye became ritualized and interpreted as a metaphor."

If much of this sounds like a cross between hippie rap and New Age human potential theory, Pete is ready with a lengthy discourse on things like brain pulsations and brain metabolism. He pores over graphs, charts, articles, and other data he has amassed in hopes of convincing the medical profession to take trepanation seriously.

The idea behind the procedure is that a trepanned head gives the brain more room to pulse with each heartbeat, feeding more oxygen to the brain's cells. The hole acts like the soft spot, or fontanel, in a baby's skull, which, Halvorson says, increases the "brain-blood volume" and the brain's ability to function.

Pete, who lives on a 40-acre farm in semi-rural Wernersville, Pa., plans to escort a second group of 15 people to Mexico in November. The procedure costs $2,500, and Pete says he doesn't see a dime of it. The only money he makes through trepanation is in the sale of T-shirts and videos offered on his website, which he says barely covers his costs. "My only interest is helping people change their lives through trepanation," he says.

Before ushering them south of the border, Pete says, he insists they get "engrammed," which involves copying and reciting into a tape ten times some literature Pete has prepared on the procedure-"so they fully understand the choice they're making." After trepanation, he recommends they take the Creative Intelligence Program, a "one-on-one training program to evolve human potential," created by Pete's colleague, Jack Krueger, "an artist and third-eyer." "We don't merely want to change people from being unhappy couch potatoes to being happy couch potatoes," Pete says. "We want them to realize their own unique brilliance and to develop their personalities to the fullest."

By adulthood, Pete says, our skulls have hardened and sealed, restricting the volume of blood in our brains. "That's why so many of us experience a major downer after our teens," he says. "Unfortunately, most people spend the rest of their lives as couch potatoes heading on a downward spiral."

Chris Emery, 55, whom I'd seen under the drill on Pete's videotape from Mexico, told me she decided to get trepanned after years of struggling with depression. "After the surgery I noticed a big difference in my energy levels and outlook on life," she says. "Whereas I used to wake up, walk to the kitchen and have to sit and rest for a while, I now get up, make my coffee and get to work." About the 15 minute procedure, she said, "It was nothing. I actually fell asleep during it. I'd rather get trepanned than go to the dentist any day!"

The world, of course, is full of people who lead happy, productive lives without drilling holes in their heads. According to Halvorson, many successful people--leaders in business, science, politics and education, artists and musicians--are "third-eyers." Which means that either (a) their intercranial seams never closed with age (approximately 10 percent of the population) or (b) they sustained a head injury that never fully healed (another 10 percent).

"Take Hitler," Pete says. "In World War I he was trepanned after sustaining a major head wound, like a 1 ½- to 2-inch hole. Unfortunately, he was a sociopath who used his genius for evil." A hole in the head-well, that's certainly one way to account for Hitler's atrocities.

When I asked Pete about the Post piece, he replied: "Doctors have a selective hearing disorder. We've never said that trepanation affects blood flow to the brain. We're saying it increases blood volume in the brain, and these doctors have absolutely no data about blood volume because there's never been a single U.S. medical investigation into any aspect of elective trepanation."

Which is why Pete is so thrilled about his association with Dr. Kirsch and his team in Mexico. By giving each patient an MRI before and after the procedure, as well as six months later, Pete hopes he can offer conclusive proof that trepanation increases the brain-blood volume. Psychological evaluations, he says, will demonstrate that trepanation improves brain function.