'A Woman of Principle': Interview with Deborah Norville

The TV journalist and devout Christian talks about her faith and the power of gratitude. 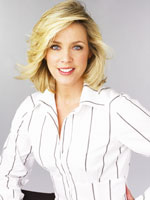 Deborah Norville has been in the public eye, for better and for worse, for most of her personal and professional life. On the one hand, she is now in her 12th year as anchor of syndicated TV newsmagazine "Inside Edition"—a lone survivor of what was once a tabloid glut of such shows as "Hard Copy" and "A Current Affair"—and has already signed on for more. Norville is also known for her unfortunate role as the "younger woman" who replaced much-beloved veteran Jane Pauley on NBC's "Today" show.  That short but noisy debacle in 1990 led to a press frenzy that sent Norville into a depression and looked to be a career-ender.

But the Dalton, Georgia, native, who had seen some tough times before—as a child of divorce and caretaker of her bedridden mother, who died when Norville was 20—came out the other side and turned her experience into a self-help book, "Back on Track: How to Straighten Out Your Life When it Throws You a Curve."

Much of what helped Norville through the hardest times, she says, was her Christian faith. Now she has found inspiration in the subject of her latest book, "Thank You Power: Making the Science of Gratitude Work for You" (set for release Oct. 2 from publisher Thomas Nelson) Former television critic James Endrst sat down with Norville recently in to talk about her belief system and its place in her life and work.

You've been with "Inside Edition" for 12 years, married for 20, have three healthy kids, and continue to thrive in television long after many people left you for dead professionally.  It seems you have a lot to be grateful for.

Is gratitude an important thread in your life?  Something you think about on a day-to-day basis?

I think about it on an hourly basis, really, because I'm constantly finding things to be grateful for.  It's not that pay-it-forward garbage that you hear about.  It's not monumental "Hallelujah!  Praise the Lord" stuff.  For me, it's just a constant, steady cadence.  It's a metronome to my life.

And, in fact, that’s the heart of your new book, “Thank You Power.”

Yes, it is.  Some of my best stories have always come from natural curiosity, and I have been curious over the last few years, like [why does] my life go better when I make a point of stopping in this crazy, busy city that I live in and internally put the brakes on? [I] go inside, reflect on that moment, that person, that experience that was pleasurable, and then go, "Whoa! I feel good. And why do I feel good? Why do I keep feeling good?" And all of those kind of questions that follow from that. What I've learned is there's a scientifically proven phenomenon that's attached to gratitude, and that if you consciously take note of what is good in your life, quantifiable benefits happen.  No one has done anything on this in a major way and I think that person is going to be me.

One thing many people don't know about you is that you are a devoted Christian.

Yeah. Born again. Age 15. I marched up to the front of the church.  I grew up in Georgia, for starters—smack-dab in the heart of the Bible Belt, to the point that I really thought that distinctions between religious affiliations were Presbyterian, Methodist, Baptist, Episcopal, and Lutheran.  I was brought up Methodist, christened as a little baby and went to church every Sunday.  When I was in high school, the boy I was going with was Baptist.  I'd go to my church in the morning and I'd go with his family at night to the Baptist church.  The Baptists are real big about getting right with God, and Baptism happens when the person is old enough to accept Christ as their savior and walk to the front of the church and consciously make the decision.  Whereas, Methodists or Episcopalians—which is what I am now—pledge to bring [their] child up in a Christian home.

So it was a result of the way you grew up, as opposed to a moment of revelation?

I've never felt electricity or anything like that.  I'm always a bit skeptical of those who say they do.  I would say it's a combination.  But there was definitely a moment of revelation.  Did the Lord speak to me the way you speak to me on the telephone?  No.  But did I feel called to make a public statement that this is part of my life?  Yeah.  And it definitely did change my life because I then started attending Bible study.

Today, sadly, I am under-whelmed by the caliber of preaching at my church, and in a quiet way, I've contributed to the discussion about how we might improve that.  One of the things that I have said is that sermons need to be based in the scripture.  The scripture is God's plan on how we are to live our lives here and what we are to do to have eternal life.  It's real basic.  And if we do not refer to the Holy Bible in church during the sermon, then why are we here?

I've read that one of your favorite expressions is stitched on a pillow that your grandmother gave you.

Oh yeah, "Please be patient, God isn't finished with me."

Do you have a favorite prayer?

Not so much a prayer as a Bible verse: Philippians 4:13, "I can do all things through him who strengthens me."

How do you live your life as a Christian working in what some people would consider the godless world of and heathens?

[Laughs] This woman came up to me [after hearing Norville talk about her faith during a show about Mel Gibson's controversial "The Passion of the Christ"] and she said, "I had no idea there were any Christians in your business."  And I said, "Well, ma'am, we give you good reason to suspect that there aren't."

It's not really tricky, but my faith is part of the morality of who I am.  My job as a television anchor or television reporter is not to proselytize. That is not what I'm hired for. That is not what the public airwaves over which I do my job are intended for. That's not my air space—it belongs to the people.  So I don't proselytize on the air.  I don't witness on the air. I would like to think that the way I go about my stories, the way I conduct my interviews, and the way I try to quietly influence things behind the scenes might give people reason to suspect that [I am a] woman of ethics, but they should not be able to say, 'Deborah Norville belongs to an Episcopalian Church, was brought up Methodist, and was Baptist in between.' If they can say that then I have done my job wrong. But if the way I live my life and the way I conduct my job leads them to believe 'She's a woman of principle and religious affinity,' that's fine.