In 2008 the Living Lights brand from Zonderkidz, a HarperCollins Christian Publishing imprint, teamed up together to publish faith-based Berenstain Bear children’s books resulting in five million units being sold. 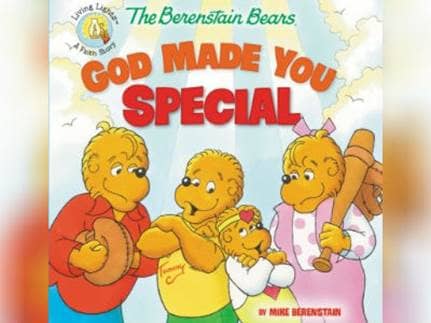 For over a quarter of a century, The Berenstain Bears created by Stan and Jan Berenstain, have continued to teach and entertain children worldwide. Since the 1962 debut of the first Berenstain Bear book, The Big Honey Hunt, the series has grown to include over 300 titles and sell over 260 million copies. The series has continued with the Stan and Jan’s son Mike Berenstain now penning the illustrious titles. Each book tells a story and provides a life lesson that children will treasure for a lifetime.

In 2008 the Living Lights brand from Zonderkidz, a HarperCollins Christian Publishing imprint, teamed up together to publish faith-based Berenstain Bear children’s books resulting in five million units being sold.

Focusing on the spirituality, Mike Berenstain has continued his parent’s legacy by continuing to write Berenstain Bear stories. In a statement released by Zondervan Mike said, “It has been immensely gratifying to experience the warm support and enthusiasm of our audience for this series focusing on the spiritual side of family life.” Each book guides little ones within lessons of family, manners, morality, holidays, and faith. Annette Bourland, Senior Vice President and Publisher of Zonderkidz released a statement saying, “Families trust the Berenstain Bears to help parents talk through many of life’s lessons. Through the Living Lights brand, they have a resource that helps them explain some of the intricacies of faith and culture in a way children can relate to.”

The young readers are able to identify with the young cubs and provide them with the building blocks they need to cultivate their own belief system based on a faith based foundation. In 2015 some of the newly released titles include: The Berenstain Bears The Very First Christmas, God Bless our Country, Storybook Bible for Little Ones, and The Forgiving Tree.

Each title helps to bring about a child’s understanding of faith and God. Within each book, one of the main characters experiences an obstacle that challenges their way of life. Each character must do some soul searching and discover the bigger picture in order to learn the life lesson that will help make them a better person. Each story is easy to read and young children are able to relate.

Keep the Faith is one of most popular faith centered books that helps children understand the tests that God places during our journey. In the book Mama Bear finds it difficult to explain the concept of faith so she enlists some help from Preacher Brown and he helps them understanding the true meaning. Common questions all children have are addressed in the book and they are explained in a way that’s understandable for young children to comprehend. Also, the title complies with Common Core Standards that provide prompting and support questions about key details in the text that will help parents and children.

It’s fantastic that Mike Berenstain has continued the legacy of the Berenstain Bears. Children for many generations to come will be able to enjoy the tales of the infamous bears and learn life lessons that they will treasure and share with their own children.