Can I Trust Faith Healers I See on Television?

No! That’s the short answer.

That is not to say your faith plays no part in healing. It does. The role of faith in one’s health is documented. I am suggesting here that the phony flock-fleecing, materialistic rich dudes you see on television and hear on the radio promising healing – if you have faith and send them a donation as convenient prerequisites – are more crooked than Lombard Street in San Francisco.

Faith healers who say Christians should regard sickness and suffering as an attack from the Devil or, if they are attacked, that they could overcome all illness and suffering if they just have enough faith are some of the most pitiful, delusional, misguided, and demonic persons I can imagine. They are evil but, and this is the demonic nature of it all, they appear so godly and sincere.

If you haven’t figured this out by now, you need to be told loud and clear that being human means you will suffer. You will have problems. And it isn’t the Devil – whatever you think that creature is – who is inflicting the sickness or hard times on you. Nor is God “testing” you to see whether your faith is strong enough or you’ve offered up enough prayers to warrant his attention.

Suffering is the nature of life.

Mature followers of God are those persons who embrace all of life’s experiences and they do so while practicing mindfulness, faith in the Eternal Presence, and personal, inner peace. This all takes discipline and practice. It isn’t a reward you get for an all-night prayer vigil or the right kind of oil anointed on your head. Spiritually-mature persons are those who are learning the secret Jesus taught – indeed every spiritual master taught – and that secret is how to be in the world but not of it at one-and-the-same time.

The Buddha said, for example, “Suffering is the nature of the human experience.”
Jesus said, “In the world you will have tribulation”(John 16:33).

If there was one iota of truth to what faith healers claim, why is it then that you have never…I repeat…you have never…again, I repeat, for those of you hard of hearing…there has never ever been one instance when a faith healer, in one of their circuses of miracle healing, restored or healed a Down Syndrome child.

Not once.
Not ever.
Never.
Nada.

So, why is it you cannot see this phoniness on their part? What is it that has blinded you to this trick of theirs that you would still be willing to send your last dollar to them so they can jet set around the world selling their phony formulas they call faith and the “Gospel?”

Yes, the question is: What is wrong with your capacity to see evil for what it really is?

If faith healers were real, which of course they are not, wouldn’t they be able to release God’s power to heal at least ONE Down Syndrome child? Is God only able to take away crutches from those with pains in their backsides or tumors in their chests?

Come on! Wake up! Give me a break! Stop being sucked in by these charlatans masquerading as spiritual leaders. Live real. Be real. Stop making a mockery of your own faith.

It just ain’t so!

It isn’t evil in this world – although there is plenty of it on the streets everywhere – that is destroying the Christian faith and our culture. It is religious hucksters like I’ve just described who have doing more harm to the Christian faith than anyone or anything else in this entire world.

What this world needs is for people like you and me to grow up! To let go of childish faith. And, at the least, turn away from these charlatans pretending to be God’s servants.

Walk with God instead, in and through all of your experiences, the good days and the bad days, the days of triumph as well as the days of suffering. You’ll have both. So, do not try to escape from either. Step into your problems instead. Do so with courage knowing you are not alone.

Dr. Steve McSwain is an author and speaker, counselor to non-profits and congregations, an advocate in the fields of self-development, interfaith cooperation, and spiritual growth. His blogs at BeliefNet.com, the Huffington Post, as well as his own website (www.SteveMcSwain.com) inspire people of all faith traditions. Dr. McSwain is an Ambassador to the Council on the Parliament for the World’s Religions. His interfaith pendants are worn by thousands on virtually every continent, sharing his vision of creating a more conscious, compassionate, and charitable world. Visit his website for more information or to book him for an inspirational talk on happiness, inner peace, interfaith respect or charitable living. 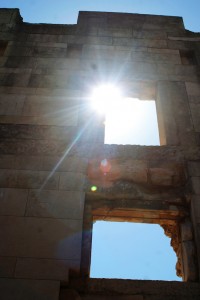