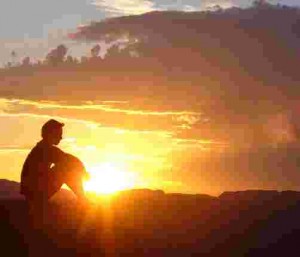 St John of the Cross…

“I seek God, but not because I think it is what I’m supposed to do;

I do it instead because I need to…

because of a longing that is not of my own creation.”

I suspect that explains it as well as I could ever express it.

“I seek God.” I might say it like this: I am both the seeker and the sought.

The goal of your spiritual life is to see as God sees (1 Samuel 16:7)…in other words, to step up and out of the illusion of separateness. “Man does not see as God sees,” said the prophet Samuel.

That reality does not mean, however, that seeing as God sees is outside the realm of possibility.

What IS God, anyway?

When I say the word “God,” for example, what do you see in your “minds eye?”

I think I know.

It’s still the same with me, although after some years of practice, not quite as automatic or fixed. I see this big, benevolent fellow sitting in an even bigger chair and miraculously floating around on a white cloud, somewhere up in the sky. Versions of this common mental seeing vary from person to person but, that’s about it, isn’t it?

It’s also very limiting.  Indicative of the limited conditioning…the inadequate religious instruction that most of us received in Catholic, Evangelical, and Protestant schools of religious teaching…narrow, misinformed but sincerely taught nonsense…hasn’t that been the experience of many a follower of God? My experience? Yes. Maybe yours, too.

Jesus’ prayer in John 17, whatever you may wish to say about it, was a prayer…a hope…a longing he expressed that the day would come when “they would be one as we are one” (Jn 17:21). I used to mistakenly think his prayer was for unity among his followers. That they all learn how to get along. If that was his prayer, however,…his real hope…then his prayer was a dismal failure. Followers of Jesus have never been united. Today, they are more divided than ever. In fact, the history of Christianity is the history of disagreement and division. Try to spin it differently, my friend, and you’re just ignoring the facts. Kidding no one but yourself.

No, what Jesus prayed is that his followers would know unity with God…oneness with the Father…singularity with the Eternal – no separation. No God and Us. No Judge in the sky and the rest of us on earth. Know this oneness, this kind of unity with God and it does change your perspective toward others, as well as your view of them…experience of them…respect toward them. Not because you’ve managed to convert everybody to YOUR way of believing but because you no longer have to have conformity of belief to enjoy a unity with humanity.

Unity beyond beliefs. When you know this kind of unity with God, differences between humans can actually be celebrated.

Do not try to understand this mystery of unity, however…this oneness with God…or with yourself. Oh sure, perhaps when you’re able to explain the mystery of quantum mechanics, you will be qualified to talk about God. But, until then, stop pretending that you and your tribe know more than you could ever possibly know. Enjoy the Mystery instead.

The next preacher you hear telling you he knows who God is…what God thinks…even what God believes because, after all he’s speaking from God’s book…know this, my friend…know this…well, never mind. I’m not going to say anymore. You know how to fill in the blank.

It’s why you were given a mind. Use it. Follow your gut, too. Ninety-nine per cent of the time it isn’t wrong. Treat the inner voice as if it were the Holy Spirit in you talking to you. Pretty good chance it is.

I could say more but you get the point, don’t you? My own experience has taught me that those persons who know God…who actually live from this place knowing…of seeing…of unity about which Jesus spoke – unity with God, the Father, the Mother, the I Mm – such persons, I’ve discovered, typically have very little to say about this Mystery. The more you know God, the less you have to say. The less you need to say. Think about that.

St. John had more to say…

“I seek God, but not because I think it is what I am supposed to do.” But isn’t that exactly how you have lived your spiritual life? It has been for me. I’ve lived driven by religious duty, obligation. I have been trying to make it with God for as long as I can remember.

And, frankly, I grew tired of trying. Which is precisely where scores of you are who follow my work…who read my books…who follow my HuffPo blogs…I put into words what you’re feeling, or not feeling, in your heart. I’m hardly a gifted writer. But it takes no special writing ability. I simply talk from my heart, as best as I am able. With as much transparency as I can muster.

This is so acute for some of you that you are not sure where to turn. About all you do know is what you want no part of organized religion ever again. I regret that for you, but I DO understand…the madness you had to believe in order to be…the stuff you had to do in or to be deserving…the burdens you had to bear to be worthy of divine favor.

Good for you, my friend. I mean it. Rise up. Walk away, if it takes that to secure your sanity. Know that you are one step closer to spiritual sanity. To your own healing. Ah, just the knowing your one step away means the step has been taken already.

Stop doing anything else. Just live into your essence instead. All of your religious “doings” – all of your performances…your religious practices…they were too often done just to secure forgiveness for the past…to get it “covered by the blood,” I think we used to put it…to get it all cleaned up. Or, your religious duty was done in a some futile attempt to take the bite out of the fear associated with your imaginary uncertainties of tomorrow.

You’re not alone. You never have been. You only feel alone because you’ve forgotten who’s in the desert with you.

Just BE. Enter into whatever it is you are feeling right now. That will plant you in the present…which, my friend who has forgotten, is the PRESENCE herself. In other words, stop seeking a God who sits on thrones and floats around on imaginary clouds…stop searching for God as if He were playing some cosmic game of “hide ‘n seek.”

“I seek God,” said St. John of the Cross, “because of a longing that is not of my own creation.”

Just give your attention to the impulse you feel for God. Yes, I’ve said it before. Many times before. So why do you keep complicating it?

I’ll say it again: The impulse…the thought of God…the desire you have in you to know God…

My friend…THAT IS GOD!

Why else would you desire her? Long for her?

The Divine is the seeker in you seeking herself.

Dare I take it further?

The Presence in you seeking you in this present moment.

Dare I say it one more way?

Even more mysterious? Inexplicable? Unacceptable to most?

The God in you is seeking the God you are.

What else could Jesus have meant? “That they may be ONE”…no separation…the eye through which I see is the eye that sees me…”even as we are” (John 17:20).

If this is NOT what Jesus meant, then please do explain what he DID mean? 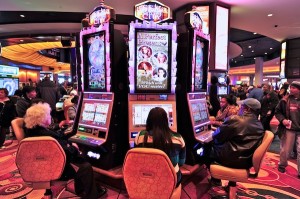 What God, Church-Going, and Casinos Share in Common...
archives most recent
More from Beliefnet and our partners
previous posts