I haven’t written a goddamn (pun intended) thing here since OCTOBER. I’m pretty good at math and that equals nearly three months of silence from this here heathen. I think I’m overdue to at least check in and apologize, but I’m not going to. Instead I’m going to slowly, but surely, explain why I lost my mojo and how I intend to (hopefully) get it back.

After our lengthy hiatus, Joel dragged my ass out of bed two weeks ago for Greek Orthodox church. Somehow in the hours after I passed out on New Year’s Eve, but before he joined me in mutual unconsciousness, it was all decided while I snored: we were starting up the blog again and we were heading straight to a Greek Orthodox church.

Joel even gave me a week before making me go, but still, I’m not gonna lie: absolutely NO part of me wanted to go to church that Sunday. I mean, wasn’t there something I needed to scrub? Or launder? Or bake? I would have done ANYTHING to avoid going to church. Any. Thing.

But alas, the bald man is a cruel task master and we were out of bed and on the road before 10:00 with three kids in tow.

That was our first mistake. Who in their right mind thinks it’s a good idea to take two children under the age of ten to a two-hour Greek Orthodox service?

Do you know what they give you when you first arrive at a Greek Orthodox church?

FIRE. That’s what. THEY GAVE MY CHILDREN CANDLES. To PLAY with. 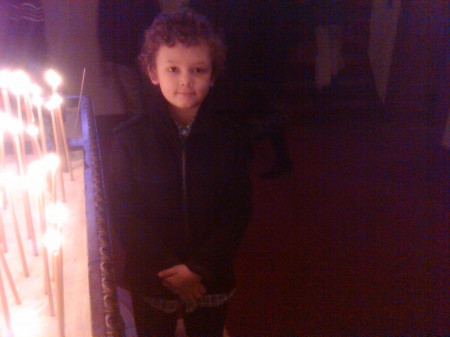 It went downhill from there. I mean, just look at the definition of ORTHODOX and tell me we all didn’t know ahead of time that it was going to be a disaster…

1. conforming with established or accepted standards, as in religion, behavior, or attitudes

2. conforming to the Christian faith as established by the early Church

Conformity! It’s what’s (NOT) for dinner!

By the end of the service, I was BEGGING Joel to quit taking pictures so we could just leave. Please! For the love of Christ! GET ME OUT OF THERE! My head was not even in the same ballpark as the game. I not only didn’t want to BE there, no part of me wanted to write about it afterward. I just wanted to forget it ever happened. (Especially the part where my son knocked over my coffee cup not once, not twice, but THREE times and how the only thing I had available to sop up the mess was my daughter’s coat and oh, BY THE WAY, did I mention our washing machine is broken and it started to snow the next week and she had no coat?)

I had lost my mojo. My first instinct was to chalk it up to writer’s block.

“I have nothing interesting left to say about religion!”

“No one comments, anyway, so who cares!”

So last Sunday I desperately hoped that a trip to Mars might perk up my writer’s block.

That’s all this could possibly be, right? Writer’s block!

But Mars Hill was just like every other fundamentalist church we’ve been to. In fact, it was EERILY similar to City Bible Church. So much SIN and SATAN and JESUS. “If we don’t talk [with our spouses] about our sins, we don’t really believe that Jesus died for our sins.” I have to admit, it REALLY freaked out my inner feminist when the pastor insisted that all the men stand over their wives and make the following vow:

“My church will be served… by me.

My wife will be loved… by me.

My wife will be served… by me.

My family will be led… by me.

My wife will be prayed over… by me.”

He even went on to say that a man can’t stay bitter over a woman he’s praying for, but when I turned to Joel as we heard that he admitted, “You can. I’ve done it.”

All I could think was WHAT ABOUT THE WOMEN? I have an equal responsibility to my man as he has to me. Why weren’t the women praying over their husbands? Does Jesus not care about them? Is Jesus a chauvinist? (Stop laughing.)

Aren’t the women responsible for their “REAL MARRIAGE” too?

I know I have nothing BUT responsibility when it comes to Joel and making our relationship work.

Lately going to church has felt like one more obligation I can’t quite meet. One more item on my mental to do list when, frankly, keeping Amanda P. Effing Westmont and all her baggage afloat feels like the first ten pages. I can’t check anything of my list, much less even write the list in the first place.

So church. Yeah. Not my highest priority.

Last night we were driving to pick up Joel’s daughter for the weekend when he casually asked me where we were going to go this Sunday. I took as deep a breath as I could muster given that anxiety has made me feel like I have the lung capacity of a runt gerbil and answered honestly: “I would rather not go to church every week.” Can’t we just go every OTHER week? Or something?

Joel bristled at this idea, but since my daughter was in the back seat and we don’t like to argue in front of the kids, we tabled the discussion for later. As the rain pounded the windshield, I could feel Joel’s anger pounding me even harder from the driver’s seat. He was PISSED. But the odd thing was for the first time ever, I was 100% calm. I don’t think I’ve ever felt so simultaneously rational and emotional at the same time. I’ve been doing so much work lately to see through my anger, to see through my fears, to see my underlying sadness and I was still high on the fumes of a really great therapy session earlier that afternoon. So I did what my therapist has been trying to teach me to do: I sat there and I felt my feelings.

Dude, you guys, I felt them HARD. Sadness is really REALLY painful, especially in the gray matter right behind my eyes. So after we picked up Liza, I spent the remainder of the drive trying not to sob in front of my two favorite girls in the whole wide world. When we got home, I disappeared into our bedroom, curled myself into a fetal position and bawled my eyes out in the dark. Another thing my therapist has taught me: crying is really, REALLY good for you. It actually alters the chemistry in your brain in a positive way.

But by forcing myself to feel all those mother-effing feelings, I’d figured it all out. It was one of the butt-ton of a-ha moments I’ve had in the past few months of the best/worst therapy I’ve ever had. (Therapy totally works if you have the nuts to work it!)

The truth is that I haven’t wanted to write this blog because Joel and I aren’t okay. We love each other insanely much, but we’re both broken. Me especially. I lost my mojo some time over the summer when I began to feel like I loved Joel more than he loved me.

Do you have any idea how hard it was for me to type that just now? I don’t feel like an equal partner in the most important relationship I’ve ever had. My biggest fear is that I have found the love of my life (because I might not believe in Jesus, but God help me, I believe that Joel T. Gunz is The One), but that he doesn’t feel that way about me.

Of course, Joel DOES love me. He tells me so every day of my life and shows me in a hundred subtle ways, most of which involve the simple act of showing up and putting up with my crap. (Which is more than anyone would expect of a saint!)

It’s hard for me. I’ve never felt it before and I don’t know how to do it properly. Nothing is ever enough. I don’t know if anything he does will ever be enough because I have to love myself enough first. But the man is persistent. No matter how difficult I am, he keeps trying. He is still here right where I need him.

I started this blog not just as a chronicle of our various trips to church, but as a love story. I think that’s why it’s been so hard to write lately. I love Joel Gunz with every fiber of my being, but relationships are HARD. And when you’re as broken as I am, they can feel impossible.

Joel and I may be broken and what we have isn’t the perfect happily ever after, but Jesus or not, WE’RE DOING IT RIGHT. Joel heard me sobbing on Friday and came in to check on me.

There were tears. And words. And angst. And anger. And even some regrettable hostility.

But in the end we agreed that there are only two things that matter: LOVE and PERSISTENCE. Frankly Jesus can go be a unicorn for some other couple because Joel and I are going to be fine. We’re always going to be broken. We might always struggle. But we love each other and we have faith that no matter what, we’re going to work it out.

We’re going to be okay. 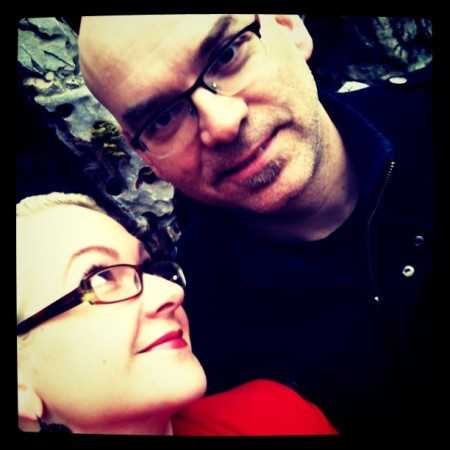 So is this blog.

Martians for Jesus Invade!
archives most recent
More from Beliefnet and our partners
previous posts