Join Us for a Trip to Mars… Hill Church, That Is 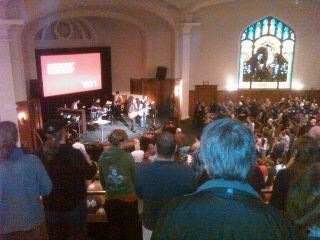 After what has been Portland’s bitterest commercial real estate battle since Wal-Mart tried to move into Hayden Meadows five years ago, today, Seattle-based Mars Hill (mega)Church celebrated the grand opening of its new “church plant” on SE 32nd and Taylor.

Located in the Hawthorne District, the site is practically ground zero for the local godless liberal community. And that seems to be the point. In a statement as backhanded as it is patronizing, Pastor Tim Smith throws down the gauntlet on the church website:

“The people of Portland largely worship created things without acknowledging the Creator.  From food to art to brewing to the best coffee you have ever tasted, Portland loves the gifts of the common grace of God without knowing the giver.”

Well, thank Krishna, Pastor Tim is here to set us straight! The problem, you see, is that Portland has “less [sic] Jesus followers per capita than almost anywhere in the US.” What he leaves out is that Portland also has more bookstores and a better-educated populace than most other cities. Coincidence?

As a free speech a advocate, I defend Mars Hill Church’s right to preach a gospel that alienates a significant part of their neighbors. But have they gone too far?  Maybe. Maybe not. Come back in a day or two and find out what I think.

Orthodox Christianity: It’s All Greek To Me
archives most recent
More from Beliefnet and our partners
previous posts