Orthodox Christianity: It’s All Greek To Me 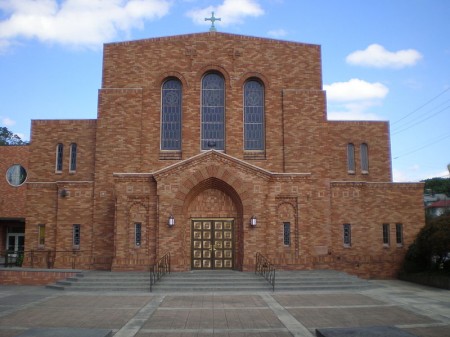 In an era of secularism and do-it-yourself community, why do churches still exist?

I believe a big part of the answer lies in the power of the ineffable. Everybody loves a good mystery. And that’s the one aspect of human experience that churches still hold within their purview. Thus, the lifeblood of a church has less to do with Jesus’ plasma than it does with its ability to keep its members in awe.

As far as I can tell, nobody in Portland does mystery better than the army of clergymen and clergytweens we observed at Holy Trinity Greek Orthodox cathedral last Sunday. 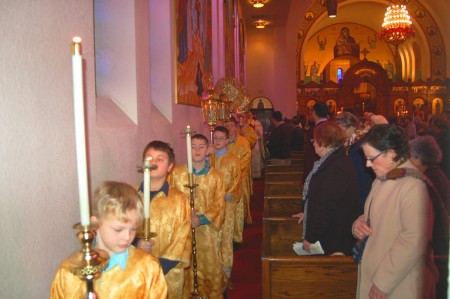 This monolithic brick structure looks and feels a lot older than its age—about 60 years—suggests. Inside, the dark wood, much of it overlayed with gold leaf, creates an atmosphere of sumptuous holyness. And the icons! Everywhere the eye lands, there are hand-painted images of Jesus and his entourage depicted at various points in his career. Though some of the larger pieces were produced as recently as 1982, these Byzantine knockoffs looked as if they could have been 1000 years old, imbuing the environment with a feeling of venerability and imparting to it a sense of uncanny significance. This church proclaims its orthodoxy before a word is spoken. 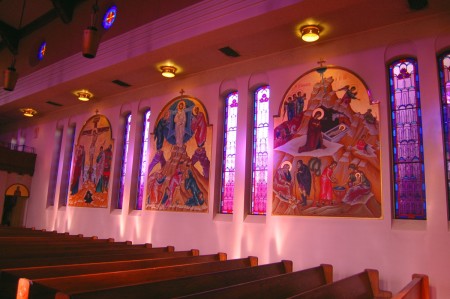 At first glance, the Greek Ortho building doesn’t look all that different from a Catholic church. Its crosses, Christian imagery, candles and holy water are all familiar enough. But scratch beneath the surface and in many ways they are polar opposites, with the Orthodox church providing a mystical, woo-woo foil to Catholicism’s legalistic sobriety.

You can see a taste for mystery in the way their Mass is celebrated. While post-Vatican II Catholic priests bless the bread and wine in front of the entire church, Orthodox peers still do it in a backstage “sanctuary,” which symbolizes God’s presence in the Holy of Holies. In practice, this means that for much of the two hours during which we sat, knelt and stood, the real action took place behind the iconostasis, or icon screen, behind which we glimpsed priests, deacons and altar boys flitting about, miming the sign of the cross, carrying sacred utensils around and otherwise engaging in religious ritual. 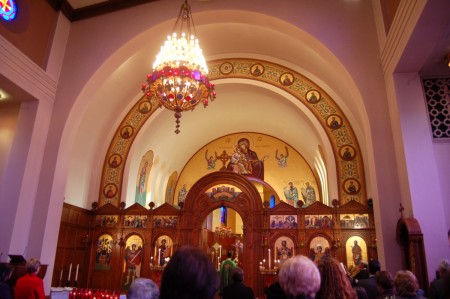 A choir was ensconced in the balcony, singing hymns, while the priest simultaneously uttered prayers from inside the sanctuary, the chalkboard-scratch of his words indistinguishable above chorus drifting down from the rafters. At other times he would swing a censer back and forth, its chimes jangling rhythmically as it emitted little dragon puffs of incense that filled the hall like the presence of the Holy Spirit itself. The specific meaning behind that blend of hidden music and hidden words was lost on me, yet I was nevertheless impressed with its ethereality pointing to the idea that there is something Greater Than and that we can commune with it if we want.

Finally, that emphasis on mystery culminates in the presentation of the sacraments themselves, which are blessed, fawned over and marched around the auditorium to such an extent that even I began to buy into the miracle. After all that fuss, it’s a shame to see that the bread was still just bread and the wine, just wine. This is by far the most complicated mass I’ve yet attended, with chanting and prayers and altar boys popping out of special portholes in the icon screen, candles in hand, to parade around the congregation. They do this every single Sunday of the year. I felt as if I were inside one of those giant cuckoo clocks you see in Swiss villages.

There was also a brief sermon, a bitter little diatribe about how some of the church members were showing up empty-handed. At one point, a mobile phone rang, and in front about 300 people, the officiating priest  kicked him out of the auditorium. I can only hope the poor fellow didn’t return.

With a service that lasts about two hours, almost half of which is in Greek, if you visit, you might want to leave the kiddos at home. Or you can do what the Orthos themselves do: most of the congregation skipped the ritualistic mumbo jumbo and showed up just in time to receive the sacraments. Who says Greeks aren’t efficient?

Okay, so the ceremony and the pomp were quite lovely. And the feeling of mystery is enchanting—albeit, truly a case of smoke and mirrors. But for me, one litmus test of a church service is, Can you take the God-talk out of the ceremony and still have your thirst for meaning and ethics nourished? In this case I’d have to say no. When it comes to Greek Orthodoxy, it’s their way or the highway. 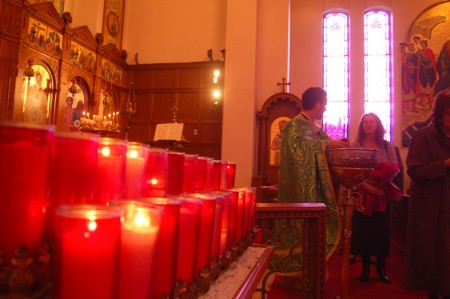 A Year of Sundays: Weeeeee’re Back!
archives most recent
More from Beliefnet and our partners
previous posts