It’s been almost a year since the inspiration for this blog began with a trip to the First A.M.E. Zion Church in North Portland. It was a predominantly black church in a predominantly black neighborhood and what I wrote about it ended up being our most controversial post to date. To this day, it’s also the post I am most proud of. The post I go back and read whenever I need to rekindle that inspiration. (In fact, I’d encourage you to go back and read it yourself.)

This week Joel and I thought it fitting to head back to North Portland where we started and visit a Full Gospel Church called Emmanuel Temple. Ironically, when I put on my red dress on Sunday, I went to church in search of all the things I’d found at the Zion church: grit, vulnerability, love, God, and a renewed ability to let go of my fears, but instead, I got everything I THOUGHT I wanted a year ago:

I had my mouth watered for audaciously be-feathered hats, jerry curl, purple pin-striped suits and the kind of fire and brimstone that would make my grandmother weep for my poor, deranged soul. I wanted to feel under-dressed and over-analyzed.

Emmanuel Temple was pretty much the opposite of what I needed this week.

I got escorted to my seat by a twiggy tween usher wearing white satin gloves.

I got assaulted by the shouting/crying/singing/hallelujahing of a woman speaking in tongues. Into a microphone.

I got a five-year old daughter with eyes as big as saucers.

I got two organs, neither of which had any pipes attached to them.

I got an organ player who reminded me of Stevie Wonder because he never once looked down at the keys of his Hammond.

I got asked if there was a witness in the house. (There was. I was sitting right next to her.)

I got a sermon that focused not on fears or love or helping others, but on how important it is to pay God first (and by “God,” the preacher clearly meant the church and all its bills, bills, bills).

I got a preacher with a monogrammed sweat towel.

I got a piercing headache right above my right ear. (Thanks Zoloft!)

I got the feeling the house drummer has the best gig in show business.

I got bored by the two-hour sermon.

But I also got a choir so loud and magnificent that when I closed my eyes, I could feel their voices banging around and echoing off the walls where my heart used to be.

What I didn’t get was faith.

It’s no secret that I’ve been struggling lately. Of course, since I am now and have always been a non-believer, I’m not talking about my faith in God. Not at all. Like always, I’m talking about Joel and me. I’m talking about how hard it is for me to actually trust him to love me. Forget God, I can’t even have faith in a man who I can see and touch and smell and kiss. A man who tells me he loves me every day in words and kindness and perseverance. And maybe it’s because I’ve always been an atheist that the concept is so damn difficult for me to grok, but things haven’t gotten any easier since I wrote my last post.

In fact, I think it’s been the hardest few days of our relationship yet. I’ve been trying – TRYING – to flip off some invisible switch in me that doubts everything and feels unworthy. So yesterday I woke up and made a decision: today is the day. I’m starting fresh. I’m going to live in a universe where I believe that Joel loves me.

But I couldn’t do it.

We had a truly lovely day together, which I promptly ruined by starting an argument that turned into a sobbing, screaming emotional slugfest that lasted into the wee hours of the morning.

All because I’m terrified. What if I put my trust and faith in Joel and he ends up not returning it? What if he breaks my heart? I’m so fragile right now that losing him feels like it would break me into a million pieces.

It’s been almost exactly a year since I told Joel I loved him for the first time. Back then I didn’t even care if he loved me back. In fact, it took him a week to say it back to me. I was that fearless. I was willing to take the risk. Willing to throw my heart off a cliff. Apparently this year has taken its toll on me because I’m not that fearless girl anymore. I keep accusing Joel of being the one who changed, but it’s been me all along.

I’m not sure what any of this has to do with going to church, except maybe it’s the place so many people go to find themselves. Emmanuel Temple didn’t do it for me (although if it had been two hours of choir and twenty minutes of sermon instead of the opposite, I’d surely be a believer), but I’m going to keep going to church. I’m going to find some faith, but more importantly, I’m going to find that girl I was when we started this blog a year ago. That bitch has my heart and I want it back.

Can I get an amen? 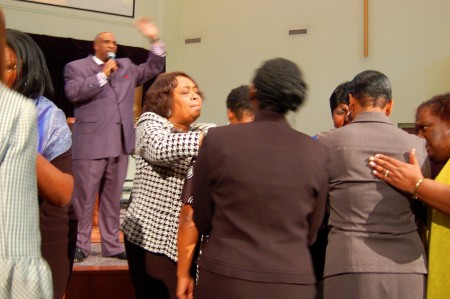