Update on My Spiritual Journey: Slogging My Way to God/Buddha/The Universe

Two weeks ago, I had one of the worst days I can ever remember having. I’d spent the afternoon up to my eyeballs in pure, unabashed ugliness. I honestly thought it couldn’t get any worse, but then a police officer pounded on my front door, read me my rights and accused me of committing a felony.

Of course it was all just a big misunderstanding. A tit-for-tat taken one titty too far. Fortunately, after a few words and a few tears, the police officer agreed with me, shook my hand and left.

But here’s where it gets freaky: when I sat back down in front of my computer twenty minutes later (rattled, but as innocent as the day I was born), there was a Facebook note from Donna Van Horn, one of the pastors at The Bridge, inviting me out for the drinks we’d been talking about having since I first met her on that perfectly imperfect Sunday in March. 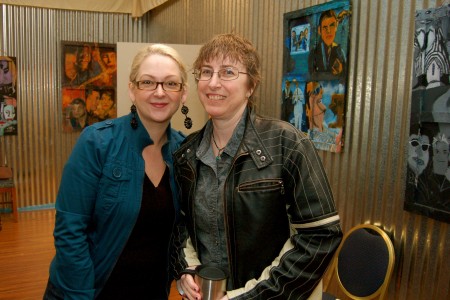 There was no way she could’ve known what was going on with me, but she somehow managed to reach out to me at the EXACT moment I needed her to. I immediately penned an enthusiastic, if profanity-laden, acceptance and sent it off to her with a complaint that she was making it really hard for me not to believe in God anymore. That bastard.

Because no matter how ugly it gets – and it’s been U-G-L-Y, you ain’t got no alibi UGLY –  I haven’t lost my ability to see beauty everywhere I look. There’s just so much of it to be had – in the church pews, in my children’s faces, in the weight of Joel’s hand on my knee when I need reassurance, in amazing conversations with amazing women on my patio, in laughter, in silence and even in drunken Wii Dance Party debauchery.

Instead of blaming any of this – the good or the bad – on God, I keep calling it “THE UNIVERSE,” and asking it questions. Like, why did THE UNIVERSE dump all this crap in my lap all at once? Not only that, but why did THE UNIVERSE crowd my crap right up against Joel’s? We were in-between his and hers court dates a couple weeks ago, stuck in traffic waiting for the I-5 Bridge to go down when Joel turned to me at the exact moment I was thinking the same thought and said, “I wish I could be more present for you.”

Or, like, here AT ALL. We were both so preoccupied for a while there that neither of us could sleep, I could barely eat (for the record, stress diet is like divorce diet, only faster), and we were running through more booze than Charlie Sheen.

If there IS a god, he’s almost certainly been testing me. My sanity, my sense of self, my relationship with Joel, my belief in the kindness of humanity. I’d like to think I’m getting decent grades except for the part where I believe in anything.

I’ve had every reason to hunker down. To shut out the world and keep myself safe. But if these Sundays have taught me anything, it’s that reaching out is the only answer. I had to ask for help. I didn’t ask God or Jesus or Buddha, but I put the word out on my blog and simply asked for support.

Literally hundreds of prayers, blog comments, e-mails, Facebook wall posts, calls from old friends and even flower deliveries rolled in. I was literally overwhelmed with love. 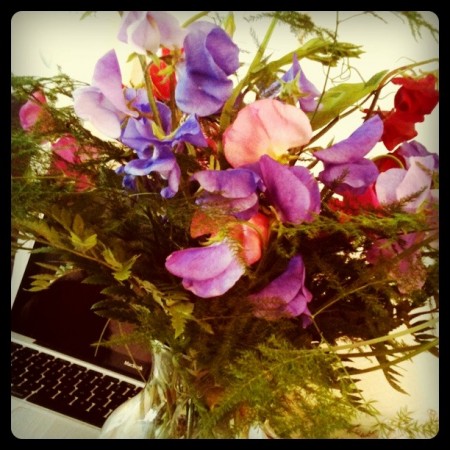 Because of the heathenous things we write on this blog, Joel and I are probably the two most prayed-for souls in all of Portland, Oregon, but this was the first time I ever really FELT those prayers, welcomed them even. And the constant fear I’d been living with dissipated enough that I was able to get back to my life. My messy, loud, imperfect, chaotic, stressful life, but a life so buttressed by love that no amount of ugly is going to seep through my cracks.

So where does all this leave me when it comes to God? What about THE UNIVERSE? Should I thank him/her/it/them or punch ’em between the eyes?

Who the hell knows! Part of me thinks the not-knowing is the beginning, the middle and the end of this “spiritual journey” I’m on. I may never know anything and I’m coming to accept that as the most likely outcome. The bonus to not knowing is that the journey never really ends, right? I get to keep wandering and wondering forever. I don’t know about you, but that’s a ratio of questions to answers that I can get behind.

I do know I’m going to start reading the Bible and see how I feel about it. I’m doing this not as a road to accepting Jesus Christ as my personal savior, but because a) I write a religion blog and my Biblical ignorance is becoming embarrassing, b) I’ll be reading along via The Bridge’s bi-weekly Bible study group called Red Letter Pub, which means there will be Bibles AND booze, and c) I’ll take advantage of ANY OPPORTUNITY to hear Donna Van Horn speak. She’s a quiet one, that pastor, but if I learned anything by accepting her invitation and having her over to get  sauced on my patio with the other Church Ladies of The Bridge, it’s that virtually everything that comes out of her mouth is golden. I don’t have to believe in Jesus to want to surround myself with people doing their damnedest to live like him.

When I asked Joel if he’d come with me to this Bible-discussion-slash-whiskey-and-cigars-appreciation-club, he was all, “I’ve read the Bible. The black parts AND the red ones. No thanks.”

Then, shaking his head glumly, he added, “Oh my God, you’re going to become a Christian, aren’t you!?”

I doubt it. I simply don’t think that’s my path. But I definitely have it in me to read one of the world’s most ancient texts. Joel shouldn’t worry. After all, I’m the girl who spent nearly five years at a liberal university and emerged a REPUBLICAN. I’m not an easy person to sway. My world views are pretty well defended.

That said, I would be lying if I said I wasn’t open to learning from the experience. God help me.

Shhh... We're going to Stop By the World Buddhist Preaching Association
archives most recent
More from Beliefnet and our partners
previous posts