I’m not sure I’ve admitted it on this blog before, but I happen to be a registered Republican.

Wait! Where are you going?! Stay!

I’m a NICE Republican, I swear. I’m pro gay marriage! I’m against don’t ask, don’t tell! I want the government out of my bedroom too! I also just happen to be a Really Big Fan of free market capitalism (reading Adam Smith makes my panties wet) and most importantly, I want the right to protect all those freedoms (and myself) with my trusty .357 magnum.

I guess the point I’m making is that I have PLENTY of beefs with my political party, nearly as many beefs as I do with Christianity, yet I continue to cast my vote for the conservative party at election after election. Unfortunately, I haven’t been able to adopt that “take the good, leave the bad” attitude when it comes to the Bible, and its stand on homosexuality is honestly my biggest stumbling block. I’m starting to think I may come to find some peace with the concept of God, but a God who would create you in his own image and then tell you who to love? Or who NOT to love? No thanks. Fortunately, our trip to Metropolitan Community Church proved that there’s plenty of God’s love to go around.

MCC smells like band camp and sounds like an off-Broadway rock opera. Like at most churches, the people are friendly and quick to welcome newcomers with a handshake and a smile. The difference is that this church genuinely means it when they say: come as you are. They’re not going to try to change you.

Since it was Pride day, the pews were filled with color. Rainbow shirts, Hawaiian leis, Mardi Gras beads, hilarious t-shirts and stickers like this one: 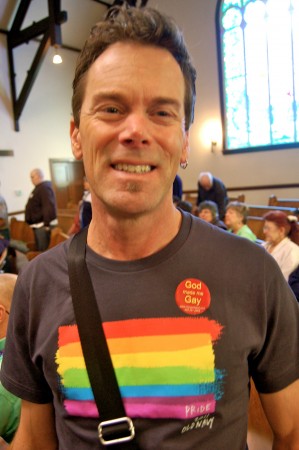 “God Made Me Gay”

When the pastor introduced one of the volunteers, a blind woman in an outrageously bright rainbow tie-dyed shirt stood up and waved. He added, “Look, she’s gay from SPACE!” and everyone laughed, including the woman’s partner, Betty, who snuggled beside her in the pew. It’s hard not to fall in love with a church that can laugh at itself. 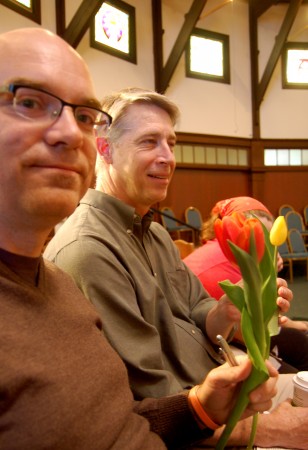 Of course they take their gay Pride seriously. The High Holy Day was also Father’s day and as the ushers passed out fresh tulips to all the Dads in the pews, including Joel, our tag-along friend Dan, and the pastor himself, I took a few minutes to read through the Sunday service program.  After all the smoke and mirrors we got from City Bible Church, you can just imagine the personal glee I experienced at seeing MCC’s full-color, month-by-month cash flow statement in the last page of their service program.

Printed! Right there! For everyone to see! Gee, how delightfully democratic. Leave it to the queers to come up with an idea that STRAIGHT-forward.

After the tulips, it was Greet Your Neighbor Time. You know, “Peace be with you.” “And also with you.” Joel and I tend not to be huge fans of this portion of the church service, mainly because we’re always newcomers and that often makes us fresh meat for the vultures. It usually leaves us feeling more left out than included, which pretty much defeats the purpose of the whole damn thing. But looking around the room while Metropolitan Community Church got their meet and greet on was like watching old friends arrive at a family BBQ. Big smiles. Open-armed embraces. Pew hopping. Games of Pass the Baby. Genuine affection.

It was Community with a capital “C” and I’m not talking about that show on NBC.

Moments later, my first tears of the morning arrived along with the music, which included a gut-wrenching rendition of Amazing Grace, sung by an alto who could have taught Bonnie Raitt a thing or two about how to sing the blues. After the chorus, the pianist, who had a bit of a Charlie Brown thing going on, would hold the refrain while a church member read from the Bible.

“And God saw everything that God had made, and behold, it was very good.”

Pastor Meckley went on to explain that God not only labored to create us in his own image, but after making us, he sat back and rested and trusted us with the gift of creation.

“Denying our gifts is resistance to creation.”

Meckley’s not-so-hidden meaning: God made you gay. On purpose. Don’t fight it.

In fact, instead of looking at pride as a sin, see it instead as, “The unveiling of the truth of how we really are. Pride is letting that light radiate toward others.”

Oh, and radiate it DID. Especially during communion, which Metropolitan Community Church takes to a whole new level. There was something about watching gray-haired gay couples approach the altar arm-in-arm, take the body and the blood of Christ and then huddle together for a prayer that hit me in the gut. I couldn’t help but cry at the justice of it and when Communion Junkie Joel lined up to follow them, I wiped my eyes and took my place at his side. The blessing we received from Pastor Meckley left me feeling blessed indeed. 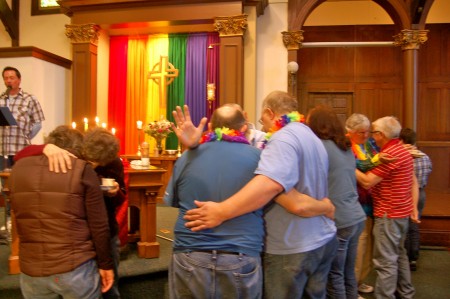 As a woman who was born and raised in the San Francisco Bay Area, homosexuality is about as different or unusual to me as a peanut butter sandwich. I was born in a queer-friendly town, went to a queer-friendly high school, and grew up in queer-friendly home with queer-friendly values. And I don’t think I’ve exactly hidden the fact that I’m a bit queer myself. As far as I’m concerned: gender has nothing to do with love. Or sex. Or God.

But plenty of folk think it has to do with whether or not you’re allowed to call yourself a Christian.

Even the pastor at one of my favorite churches shared with us that he’d “struggled with homosexuality” himself. I didn’t have the balls to ask him the question I’d had on the tip of my tongue: why does that ever need to be a struggle? Can’t it just be the way God made you? But I reassured myself by thinking he was simply sexually ambidextrous like me. And frankly, seeing the way he adored his wife quieted any misgivings I may have had about his “struggle” with sexual orientation.

But still. Why the either/or? Why can’t more Christians simply be queer for Jesus?

As far as I’m concerned, MCC is doing everything right. Not only are they LBGTQ friendly, but they have budgetary transparency, really good jams and a true understanding of the word community. They really do “lay aside all that falsely separates us and seek unity in Christ.” They even welcomed a Republican like me.