In a perfect world, you would never see a church set aside just for gay people. It makes about as much sense as starting a church for the left-handed, the red-headed  or the peanut-intolerant. But we don’t live in a perfect world. We live in the world we’ve got and I’m glad to know that in our part of it, non-hetero people have the freedom to gather in a worship community that’s custom-made just for them.

Metropolitan Community Church is that community. As its website announces, MCC is “a progressive community of faith welcoming all people, with special outreach to the gay, lesbian, bisexual and transgender communities.” That spirit of diversity extends to their beliefs as well:  “Though our individual theological beliefs differ widely, our mutual commitment to love, justice and spiritual living gives us a unifying bond.” By de-emphasizing doctrine, it seems they’re able to funnel energy to the things that really matter.

We made sure to schedule our visit to coincide with the queer-themed Portland Pride weekend, which takes place June 17-19. The building itself is a beautiful 19th century exposed beam structure, a blend of original plaster walls and updated stained glass windows representing the diversity rainbow. The casually-dressed pickup band that led the service gave  the impression of the hippie kids taking over the old wooden church. 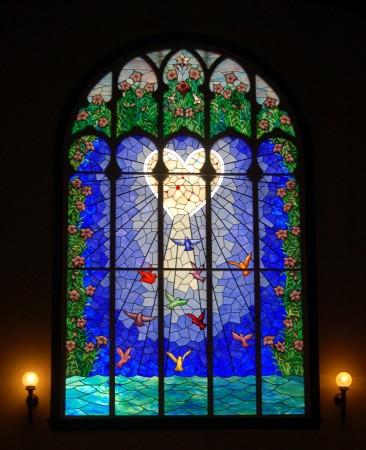 With his tongue only half in cheek, MCC’s Senior pastor, Reverend Nathan Meckley, called Portland Pride one of the High Holy days—on par with the Jewish celebrations of Rosh Hashanah and Yom Kippur. Like I said, he was only half joking. Because, while Pride features a pageantry and a carnival atmosphere, for Reverend Meckley “it’s more than just rainbow tchotchkes and a parade. It’s an opportunity to show the dignity and strength of the human spirit.”

For his sermon, Meckley read Genesis 1:31 – 2:4, which describes the creation of animals and humans and which God pronounces “very good.” How to tie this into a theme of gay pride? Meckley admitted he was at first stumped. But then he turned his attention to the “book of creation,” a tradition that seeks to learn about God’s attributes by studying “His” attributes in nature. What do we see there? According to the book Biological Exuberance: Animal Homosexuality and Natural Diversity, there is an abundance of species of all types—especially primates—that engage in homosexual behavior. In addition there are all sorts of transgendered species. In that way, nature affirms that homosexuality among humans is natural. 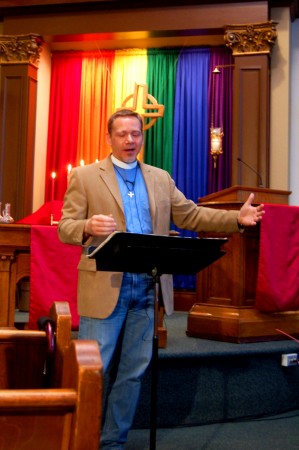 Thus, Meckley wondered, “How can we on Pride Day say we’re made in God’s image? [By saying:] ‘You look positively divine, darling!’”

As a non-believer and a humanist, I agree with Meckley. Marriage and procreation (or adoption) are inalienable human rights possessed by all people, regardless of their sexuality. As a former Christian, however, I have to admit I get a little tripped up. The Bible is woefully clear about its stand on homosexuality. The Apostle Paul described it as “unnatural” and a “degrading passion.” Although liberal theologians have tried to explain away the homophobia in the Bible, ultimately, it’s an unconvincing and futile exercise. There’s no getting around it: the Bible waves a scorning but limp wrist at LGBTQs.

Christianity endures because it bears a powerful message. Its themes of forgiveness and redemption, along with its superior principle of love has enabled it to survive centuries of changes in cultural mores. But now we live in an era in which the morality it teaches seems less and less relevant to our needs as individuals and as a society. I’d even go so far as to say that churches like MCC represent the future of Christianity. Maybe it’s time for a Bible 2.0. There is, after all, a scriptural precedent for this. While the Jewish law forbade the eating of certain animals, in Acts Chapter 10 the apostle Peter received a vision indicating that Christians would be released from such dietary restrictions. Maybe it’s time for another vision regarding sexual unions.

MCC reaches out to the gay community in all of its flavors and facets. (And if you’re straight, you’re welcome too; Amanda and I were honored to receive communion and a prayer blessing from Reverend Meckley.) (Not that Amanda is entirely straight.) It’s a unique church that arose because its members had been made unwelcome elsewhere, a congregation of people for whom Jesus’ promise “knock and it will be opened to you” failed to come true as church doors were slammed in their faces. While most churches may claim to welcome all walks of life into their midst, too often they don’t mean it. The real message is: “God loves you the way you are. Now change.” It takes a truckful of courage to stand up to God and say, “No offense, but we’re going to rewrite your rules so they make more sense for us.” If God is half the man He says He is, He would have to give His blessing to such people—if, for nothing else, their chutzpah.

Church works best when its pews have a healthy representation of people whom society refuses to acknowledge. They “get” Christianity in a way that goes right past the superficially righteous. They get that it has nothing to do with rules and regulations and everything to do with the heart. MCC gets it.

Think it might be time for a Bible 2.0? Drop by the comments section and join the conversation.

read next post
COMING SOON TO A SUNDAY NEAR YOU!
archives most recent
More from Beliefnet and our partners
previous posts