Imago Dei: 300 Pounds and Not An OUNCE of Humility 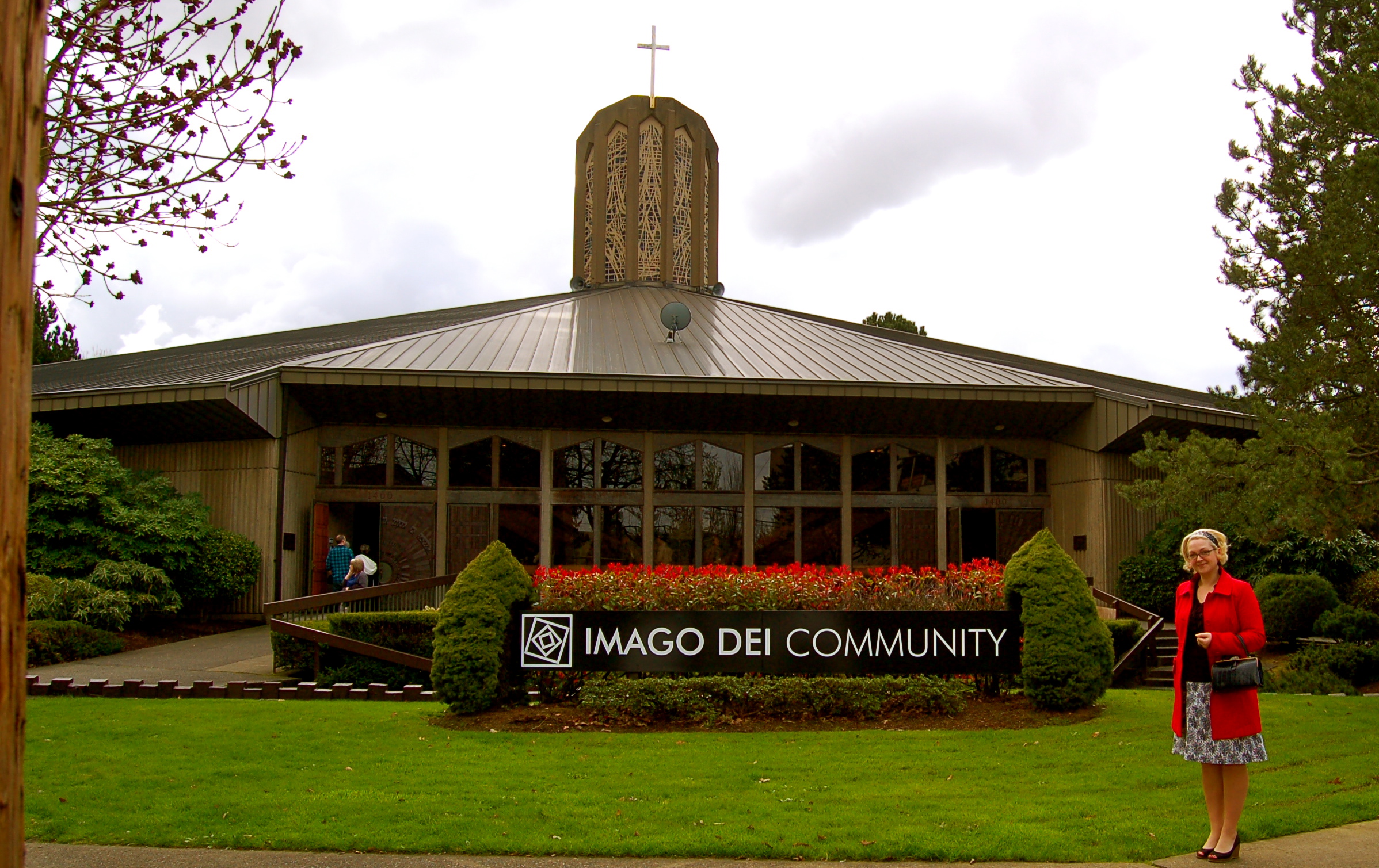 Every Sunday, Joel and I stay as long as possible after the service to hear more about the church, get a feel for its groupies and talk about our project. And nearly every week, Portland’s pew-huggers have been saying the same two words to us:

As in, “Have you been to Imago Dei yet?”

Or, “I’d love to read what you think about Imago Dei!”

But mostly, it’s been some variation on, “I bet you guys will really dig Imago Dei. It’s cool/hip/different.”

Which leads me to believe people actually think WE’RE cool. Or hip. Or maybe just different. I can’t speak for Joel on this one, but let me be the first to admit: I AM SO NOT COOL. I live in a paper mill town, for Christ’s sake. I drive an SUV with an NRA sticker on it and buy all my clothes at Target. I’m tragically UNhip. I bought these glasses at LensCrafters, people.

But apparently we look like we belong at Portland’s Church of the Hip.

I suppose I should be flattered by that, so this is me saying THANK YOU. THANKS A LOT.

We got the impression that this church was kind of a Big Deal, what with everyone in town whispering its name into our ears like a grown-up game of telephone. So before heading out there, I made sure Joel sent them an e-mail to warn them we were coming.

Amanda P. Westmont and I own a blog called “A Year of Sundays” (www.yearofsundays.com). Each week, we visit a different church and then write about the experience. We would like to visit Imago Dei this Sunday. Would one or both of you be available after the service for an interview?  Also, do you permit photographs? We’re looking forward to seeing what your church has to offer.

Their response was underwhelming…

ORLY? Not to get too full of myself and this podunk little blog, but honestly? You can’t find FIVE minutes after the service to talk to some religion bloggers? REALLY? We (theoretically speaking) want to write nice things about you and you decline? Wait, let me rephrase that: You have your SECRETARY decline.

I honestly tried to keep an open mind about this church. I wanted to like it. I wouldn’t go so far as to say I tried to be objective because that would defeat the purpose of this blog, but still. I didn’t want to hold this church against, well, itself. And I was really REALLY looking forward to this service. My expectations were higher than they’ve ever been on a Sunday morning.

So this is me being as open-minded as I possibly can about a church that is nothing more than a downtown Portland branch of FOURSQUARE.

There, I said it: Imago Dei is EXACTLY like Foursquare. From the Palm Pilots right down to the Christian Supply Store red velvet tithe bags, these churches are carbon copies of one another.

Only Imago Dei is worse.

When Pastor Rick scuffed onto the stage in his untucked triple-XL button-down and this brillo-pad helmet of Lego hair, I disliked him immediately. And not just because he bears an eery resemblance to my ex-husband. But because I’ve never seen a preacher so lacking in kindness and generosity of spirit. He just sounded too angry and self-righteous.

I sat there watching him and wondering, what IS this man eating? Is it shame? anger? depression? sexual dysfunction? (Bob Dole would like you to know there’s a pill for that). I value kindness above all other things (because it’s something I obviously need to work on myself) and while I think the pews at Imago Dei were OVERFLOWING with it, I couldn’t find any in their gregarious leader.

I have been morbidly obese myself (HERE: I will even link to the photos because there’s nothing like a good before and after), which still probably doesn’t give me license to call someone else out on their weight issues, but I’m gonna take that liberty anyway because this man? He can’t possibly be filled with Christ’s love because he clearly does not love himself.

I’m not at ALL suggesting that an unhappy fat man can’t be a good preacher, but here’s the thing: He has to OWN IT. Fat and humble? That would work for me. Skinny and a complete jackass? Totally. But morbidly obese AND overly cocky?  I’m sorry you have to wear your pain like a fat-suit for everyone to see, but that doesn’t mean you can pee on my leg and tell me it’s raining.

When Joel stepped forward to take Rick’s picture (as we had informed him in the e-mail that we would!), he said,

“Dude, what in the world?” And laughed.  “All right, I’m turning away from the camera, I don’t know what you’re doin’.” He laughed again. “This is a freaky, freaky service so far.”

Then he shot Joel down. Literally. With his finger pistol.

Rick used the sermon to discuss how people have “perverted” (a word this pastor said no less than four times on Sunday) (Freudian slip much?) the gift of the Sabbath. That the religious scholars with their clipboards are all telling us what to do and how to do it, but what Jesus REALLY meant was that we should all just turn off our cell phones for a day, stop what we’re doing and quit being so effing self-important already.

Hmmmm. Self-importance? Let’s examine that for a minute. I personally can’t think of anything more self-important than when the preacher suddenly loses Point of View (a thing we author-types pay quite a bit of attention to) and starts talking AS IF HE IS GOD. Like when he says, without attribution,

“I WANT ALL OF CREATION TO STOP AND THINK ABOUT ME!”

About YOU, Rick McKinley? Or about GOD? When you paraphrase the lord, you might want to throw down some air quotes so people don’t assume you’re getting too big for your britches. He continued to lose POV as he went on for a good thirty minutes on the importance of the Sabbath, about how God (or was it Rick? I lost track…) made you for something bigger than just work, how you are more than just a worker bee because God gives you dignity, and how “the most subversive thing you can do is to keep the Sabbath.”

But wait just a minute, Rick. Aren’t you getting paid on the Sabbath to talk about how important it is not to work on the Sabbath?

I’m not saying a preacher can’t talk about keeping the Sabbath, but I could smell this man’s hypocrisy from the back pew. How difficult would it have been to take the ten seconds of humility necessary to simply add, “I know this seems hypocritical coming from me since I’m working as we speak,” or “I obviously can’t keep the Sabbath myself, but…” or “Instead of Sunday, I keep my own Sabbath on Thursday,” or SOMETHING. Anything to reassure me that Rick McKinley isn’t living in the same Do As I Say, Not As I Do world as the Catholic pedophilia.

But his ego is even bigger than his gut.

When he finished his sermon, he disappeared. Apparently he had plans (to avoid us) after all. I wish I’d had the chance to talk to him up close and have a personal conversation because maybe it would’ve rocked my world and dispelled all my misgivings about him and his church. I’ll never know.

So we headed to the Guest Forum, where a charismatic, clean-cut, twenty-something named Doug spent fifteen minutes giving future parishioners a verbal tour of Rick McKinley’s kingdom. A more willing victim might have felt as though they were being force-fed like a foie gras goose, but I just felt like I was being sold a mattress. I did get to learn about the church and how it started as a tiny home church (which made me long wistfully for The Bridge) and grew so fast it had to swap buildings with Portland Foursquare, who didn’t mind since they were losing members anyway. (Probably because their members just switched over to the Imago Dei branch of Foursquare.)

If Imago Dei means “Image of God,” then this church is pretty much screwed because the only image I saw was that of a short, angry, fat man with a bushy goatee and a chip on his shoulder. I wanted to love Imago Dei. I really did. And I just couldn’t.

Imago Dei: Hot or Not?
archives most recent
More from Beliefnet and our partners
previous posts