A conversation with Hillsong United (Part 1) 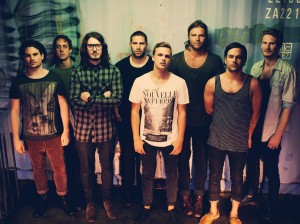 Born out of a youth ministry in Sydney, Australia’s dynamic Hillsong church, Hillsong United has steadily become one of the modern worship movement’s most influential worldwide voices. The band has collectively produced such iconic anthems as “One Way,” “Tell The World,” “The Stand,” “Mighty To Save,” “Came To My Rescue” and “From The Inside Out.” United’s latest project Aftermath, released in February, looks to be no different having already scored rave reviews thanks to future classics like “Go,” “Take Heart” and “Awakening.”

In an interview with Beliefnet, core band members Joel Houston, Jad Gillies and Jonathan “J.D.” Douglass talk about the band’s rise to prominence, what they’re seeing take place in the global Christian church, how the new album came together and what they hope to accomplish as they tour the United States and beyond:

Chad Bonham: What has been the genesis of the band having gone from local youth ministry to international touring phenomenon?

Joel Houston: We grew up in the youth ministry and started doing music and writing songs. Out of that, we recorded the songs. The songs traveled. Then three or four years later, having done that, there was the option to travel and our church people were gracious enough to let us go. Essentially we’ve been doing the same thing ever since. These days, we’re not as involved in the youth ministry nearly as much. Some of the guys still are. The genesis, as you said, still carries through to what we’re doing now but these days we’re just getting older.

Bonham: Knowing what had happened (with the successful worship ministries of your Hillsong mentors) Darlene (Zscech) and Reuben (Morgan), it’s not like you were clueless that this might eventually have an international impact, or did you really even think in those terms? 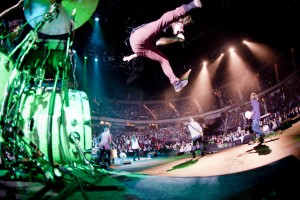 Houston: Not at all. I think we included ourselves in what was happening with what was happening with Darls and Reubs. We were a little bit younger and kind of looking up to them and what not, but…we weren’t even thinking that way. So we weren’t clueless to the thought of it, but were still a long way away. I don’t think any of us looked at ourselves and felt like we had what it takes. We were growing and looking at people like Darlene and thinking, “Well, they’re anointed and they’re talented. God has graced them to do this thing.” We were just involved in church and loving life and loving youth ministry and loving music. When we started doing it, we wanted to write songs that we liked. That might sound a little bit arrogant but there certainly was a sort of naïveté to it in the sense that we just wanted to do songs for the youth that we liked that were about God.

Bonham: So there was no assumption on your part that (the band) was going to turn into this phenomenon?

Houston: Um, honestly no. (Laughs) There actually wasn’t. We probably started to realize that about 2003, 2004 when people started…I remember when people started to sing our songs somewhere else. There’s another movement in Australia called Planetshakers. They have a festival and somebody told me they sang one of our songs there. I was like, “You’re joking.” That was like, “Are you kidding me?”  I was genuinely shocked. These days, we create the albums knowing that they’re gonna go out and we’re writing songs not just for our church or for our young people, but we’re writing songs for people everywhere. In those beginning stages, everything was a bit of a surprise.

Bonham: You guys get a unique perspective of what’s going on in the church across the world. What exciting things are you guys seeing that we as Americans don’t always get to experience?

Jonathan Douglass: This might sound funny, but all the world there are pockets of people that are so passionate about Jesus and they’re giving their lives for Him and the way they’re called to do so is one of the most encouraging things. We go a lot of places, but to be honest, sometimes we’re only in a city for 12 hours. So it is hard for us to make a judgment call on what is happening in the church worldwide. But the thing that I do know and the thing that is the most encouraging is that there are people everywhere that are doing their thing for God. That’s kind of what we picked up in the early stages of being able to travel. That’s all we’ve got to do. That’s all God asks of us. For me, I love being able to see that going on.

Bonham: What’s one of the most exciting things you’ve seen happen in one of these places that we as Westerners might not expect to see?

Jad Gillies: Well, we started this tour going around Asia. We actually did a worship night in Jakarta, which is one of the most heavily populated Muslim nations. We did a worship night there and it was crazy. People were so passionate and so willing to express their love and gratitude to God and get involved. I was so encouraged by that because largely it’s a Muslim nation.

Houston: There’s an element of fervor and passion that you can’t describe when it comes to people who, their faith literally might cost them their life. Even the event, we were told by the Australian government and others that we shouldn’t do the event because there were credible reports that there would be a terrorist attack. We were arguing about it a little bit. I was like, “There’s 10,000 Asians, Christians, who are prepared to be there and aren’t thinking twice about that. So if they’re going to be there, we’re going to be there.” Of course it was fine. It was an amazing night, but it’s just interesting the passion that you experience in a place like that when their faith comes with a cost automatically.

Gillies: For us, in Australia and perhaps here in the United States too, in school, to say you’re a Christian, maybe you got teased a bit or maybe you people made fun of you. But in some of these countries, professing your faith in Christ has higher implications. But like Joel said, basically, that’s it for them. That’s what their life is about and it’s all or nothing. I reckon that actually brings in another dimension to worship. There’s a real desperation to it and a real trust in God, which is such an amazing atmosphere to be in.

Bonham: How do you feel about the fact that the band has become such a lightning rod for youth worship music across the world and in particular here in the United States? 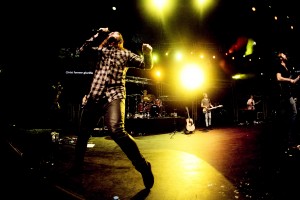 Houston: In some respects it feels somewhat like a burden. With this last project we went into, Aftermath, it was weighty. It was like there’s a responsibility here with what we’re saying, with how we’re saying it. We’ve always been real serious about not just going through the motions with anything we do, but carrying the responsibility of it and making sure that the spirit of it is pure and right. Every time we go into a project, we ask ourselves hard questions. So definitely now, it’s easy to get consumed with that—if you can call it burden or not. But the best way for us to deal with it is to keep it simple. The beautiful thing is we’re still very involved at the local level of church life and discipleship and evangelism and all the things that make the church a church and our passion is still to see people connect with God at the local level. This is great to go and fill an arena with people and sing songs to the glory of God and to see the church unified. We love that and we see that as an incredible opportunity, but the main thing is still the main thing and that is the root of all we’re all about and that’s the church as long as our attention shifts back to that. So for me, when we were doing this project, even though there’s an understanding that we are providing a service or wanting to empower churches and youth ministries and people that worship around the world, for us to get the songs we had to come back to me thinking about my friend who’s just encountered Christ and he’s trying to work it out and doesn’t understand the Holy Spirit and doesn’t some of these things. He’s getting his head around the concept of grace. I want to write a song that he can put on in his car when he’s coming home from work and it will him unpackage that. Or it’s thinking about young people engaged in a moment of worship. That’s always been the fuel and I think it will continue to be.

Click HERE for part 2 of this interview with Hillsong United.

Check out a the video version of this interview HERE.

You can also keep up with the band’s latest news by visiting the official website HERE.