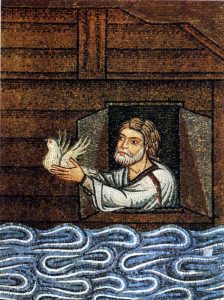 Noah is one of the only people in the Bible that find favor with God. None of his relatives, wife or children was ever said to have found favor with God. Only Noah did. Noah seemed to have unwavering faith in God, especially when he was told by God to build the ark and gather the animals two by two, in order to save them as well as his family from the flood that God was going to bring down from the Heavens.

Genesis 6 explains: The Lord saw how great the wickedness of the human race had become on the earth, and that every inclination of the thoughts of the human heart was only evil all the time. 6 The Lord regretted that he had made human beings on the earth, and his heart was deeply troubled. 7 So the Lord said, “I will wipe from the face of the earth the human race I have created—and with them the animals, the birds and the creatures that move along the ground—for I regret that I have made them.” 8 But Noah found favor in the eyes of the Lord.”

Here is the account of Noah and the Flood in the Bible:

9 “This is the account of Noah and his family. Noah was a righteous man, blameless among the people of his time, and he walked faithfully with God. 10 Noah had three sons: Shem, Ham and Japheth.11 Now the earth was corrupt in God’s sight and was full of violence. 12 God saw how corrupt the earth had become, for all the people on earth had corrupted their ways. 13 So God said to Noah, “I am going to put an end to all people, for the earth is filled with violence because of them. I am surely going to destroy both them and the earth. 14 So make yourself an ark of cypress wood; make rooms in it and coat it with pitch inside and out. 15 This is how you are to build it: The ark is to be three hundred cubits long, fifty cubits wide and thirty cubits high. 16 Make a roof for it, leaving below the roof an opening one cubit[e] high all around. Put a door in the side of the ark and make lower, middle and upper decks. 17  I am going to bring floodwaters on the earth to destroy all life under the heavens, every creature that has the breath of life in it. Everything on earth will perish. 18 But I will establish my covenant with you, and you will enter the ark—you and your sons and your wife and your sons’ wives with you. 19 You are to bring into the ark two of all living creatures, male and female, to keep them alive with you. 20 Two of every kind of bird, of every kind of animal and of every kind of creature that moves along the ground will come to you to be kept alive. 21 You are to take every kind of food that is to be eaten and store it away as food for you and for them.”22 Noah did everything just as God commanded him.

The Lord made one of the boldest statements in the beginning saying He had seen the wickedness of the people of the world. He flat out said that He regretted ever making human beings! If the lord said that back then, can you imagine how He feels about us now, with what we do to this world? But the good news is that He loved people including Noah and His family as well as every bird and other creature that He told Noah to assemble in the ark. He saved them just like He saved us. There are a lot of times Noah was asked what he was doing and why he was doing it. In those moments, he was able to tell others about the good news of our Lord and Savior Jesus Christ and hopefully save other people and convince them to join him and his family in the ark, before the flood destroyed the Earth. He promised He would never flood the Earth again after the first time. But, Noah trusted God, both with building the ark, exactly the way God instructed him too, and trusting that God would protect him and his family.  Noah gives us a great example of how we should trust God and witness for Him.  If Noah can do it back then, we can certainly trust God with our lives, today. 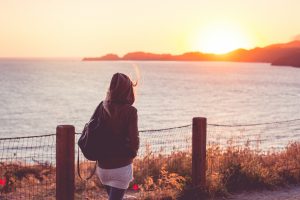