See below – The Campaign Video of State Rep. Dan Branch that was temporarily blocked from posting on his official Facebook page Thursday and his campaign video removed for violation of the site’s “community standards,” campaign manager Enrique Marquez told TheBlaze.

This video contains the words “freedom and opportunity”, “Constitution” and “marriage as between one man and one woman.”

(FINAL WARNING! FOR ANTI-CHRISTIANS, ANTI-BIBLICAL ATHEISTS, JESUS CHRIST HATERS, ALL ANTICHRISTS, SATANISTS, SODOMITES, LGBT, AND ALL OTHER GOD HATERS THE FOLLOWING VIDEO WILL OFFEND YOU!)

“We have a chance to affirm the vision that Texas was destined to become the greatest state in America.

“The strength of our state comes not from luck or good fortune. It comes from the abiding spirit of our people.

“I learned that through faith, integrity, and hard work, nearly anything is possible.

“I’m running for Attorney General to fight against an overreaching federal government, to fight for open and accountable government, and to preserve limited government in Texas.

“And I will fight for our state’s right to protect the unborn and our right to define a marriage as between one man and one woman.

“And if some in Washington want to deny us our freedoms – as they said at the Battle of Gonzalez – we’ve got four words for them here in Texas:

“Come and take it!

“I’m asking for your vote to be the next Attorney General of the great state of Texas.”

So, that’s it folks. THAT was the offensive video removed by Facebook for unexplained reasons.

Leading me to ask on Twitter “Is Battleground Texas behind the removal of the Dan Branch campaign video?”….and it didn’t take long for someone to answer:

I take it the answer to my question is a Big Fat YES!

There are actually people out there who are so worked up, so angggggrrry, that the mere mention of support of traditional marriage is considered “hate filled content”. 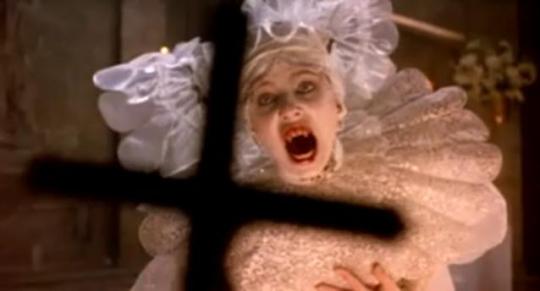 Not exactly sure why that photo comes to mind, and so far, Facebook is offering no explanation.

Calvin’s Commentary: I can’t take credit for the article above or video, but I agree with it 100%.

Therefore, let us pray in the name of Jesus Christ…God bless a brave man named Dan Branch who is running for Attorney General in Texas. Bring his causes mentioned in his video total victory over all the evilness in today’s hate-filled world of intolerant anti-Christs! God please bless his campaign and may Dan Branch be all that he claims to be in the video Facebook banned! Bless Candidate Dan Branch with righteousness and continued boldness. Bless him so he never caves! Amen.

Friends, we need a million Dan Branch’s in every position in the U.S. Government, in every State Government and in every local government position.

The poignant line from the above article is worthy to be repeated, so I’m going to reprint it right here — because a Christian gentleman I greatly respect who recruited me to blog here gave me the name the “Watchwoman on the Wall” — therefore, I feel obligated to warn you and this line effectively does exactly that …

The time is growing short. What is it going to take for YOUR pastor to wake up and start preaching a message to wake up the sleeping Christian Church and if he is not already, and refuses to, you better consider leaving that church and finding one that will. Amen? Amen!  Because…

The True Bible-Believing Christian Church that is truly filled with the Holy Spirit is what is keeping the evilone in check – Satan himself.  And if repentance and revival does not come from the pulpits of that Christian Church, America will fall and fail.

“America is great because she is good. If America ceases to be good, America will cease to be great.”