Calvin’s Commentary: How can this be that the Arabic Egyptians are enjoying denigrating the American President that promised every naive American (low-information voters) repeatedly that he was going to change America’s image in the world so that the U.S.A. would be honored, respected, loved by everyone else on earth, and that he would undue all the damage of President George W. Bush’s Cowboy Policies of “Bring it on”! Hope and change was supposed to be the remedy, remember?  It was going to be “peace, peace, peace in our time” many assumed he meant.

One of the first things he did after getting elected was to go on his World Apology Tour, telling everyone who would listen how sorry he was for every wrong that every liberal-socialist-communist-peacenik (among others, think Bill Ayers, George Soros, and the home-grown terrorist group, the New Black Panthers) who donated millions/billions to his campaigns (and probably several votes in several different precincts) and who contrived the hate for us both at home and abroad for America’s World Policy under former administrations, especially Bush’s.

He promised to end the war in Iraq and then he promptly started one in Afghanistan.

He promised to close Gitmo and try the detainees in the heart of New York City in civil courts as common criminals.  You and I accurately refer to them as Muslim terrorists, because they are dangerous terrorists and they are Muslims.  Even the most liberal residents of New York know that and responded to Barack Hussein Obama begging him, “Don’t bring those Muslim terrorists to our city!”  Don’t forget what Gitmo”detainees” are called in the less-than-descriptive political newspeak of the Obama administration.  They are not allowed to call them Muslim terrorists. The words “Muslim” and “terrorist” are not permitted in the same sentence of the Barack Hussein Obama administration’s politically correct language of newspeak (think “1984”).  Thus the Gitmo Muslim terrorist detainees remain in Gitmo — still never having been charged or tried as military combatants as would be the proper order according to many of the learned jurists of our time (who know a lot more about the law than you or I do).

He declared that al-Quaida was on the run – but now it looks more like our U.S. Diplomats and Ambassadors are on the run. Twenty-one of our embassies are closed throughout the Middle East, fearing the Muslim Terrorists that Obama was going to make friends with. What happened?

Benghazi is what happened due to the weakness of Barack and Secretary of State Hillary Clinton and now they are trying to outrun the terrorists who are threatening our embassies in the Middle East and North Africa. That’s the outcome of not standing your ground worldwide.

Seems that a heap of change came for the worse, while there’s no more hope, just reality!

What is reality – that Muslim terrorists want us dead – all of us – including the First Black President that promised to be their friend. So are Egyptians racists? Or do they hate blacks in general? Or are they simply Anti-West haters?

It’s not only the Arabic Egyptians that are making fun of Barack Hussein Obama, so are the American late-night comedians.

But that’s not the end of Barack Hussein Obama’s woes, the American people are falling out of love with the media icon of socialism as well. His poll numbers continue falling daily.

So has hope and change, changed to, “Hey, ugly American, you’re in my target range?”

P.S. The Arabic Egyptian Video below may be very disturbing to some viewers — so please remember when you’re making your comments, they are NOT my words.  I didn’t write them, I didn’t sing them, and believe me, you wouldn’t want to see me belly dancing to them!

The video – “You Obama, Your Father, Mother” – features performer Sama Elmasry brandishing a sword next to Obama’s photo as well as  various Photoshopped images of the U.S. president including dressed as Osama bin Laden and as a baby in diapers 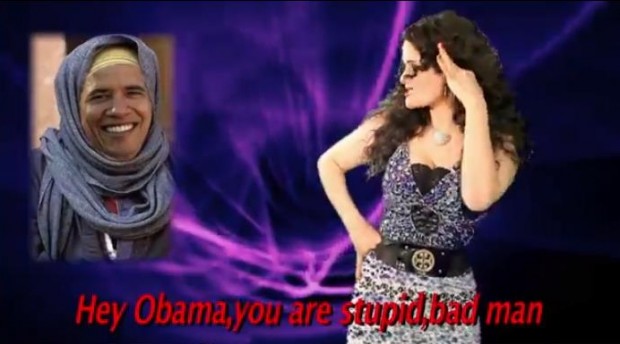 The lyrics chastise Obama and U.S. Ambassador to Egypt Anne Patterson for their perceived lack of support for the Egyptian Army which has been in control since the ousting of President Mohammed Morsi last month.

Among the lyrics, according to the video’s subtitled translation (emphasis added):

Contrary to the lyrics’ suggestion, the U.S. administration has not officially designated the events of early July as a “coup” which under U.S. law would have forced a stop to American financial aid to Egypt. 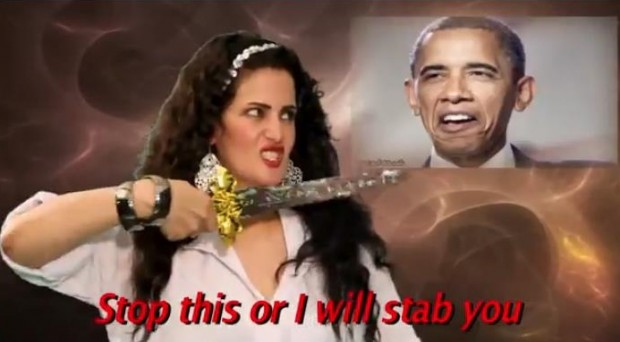 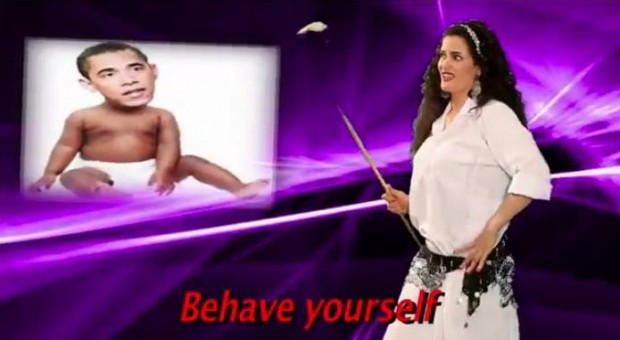 The singer then blasts the Obama administration for its call on the Egyptian military last month to release Morsi from jail, after European countries had done the same. She sings that Obama should cede from that position or she will “stab” him and mockingly brandishes a sword against Obama’s photo. She asks why he “told [secular former President Hosni] Mubarak to leave immediately,” implying that Obama always wanted the Islamists to take power.

Besides her sword, Elmasry also brandishes some choice insults including calling Obama a “jerk” and telling him, “f*** you” over threats to cut back foreign aid to Egypt. 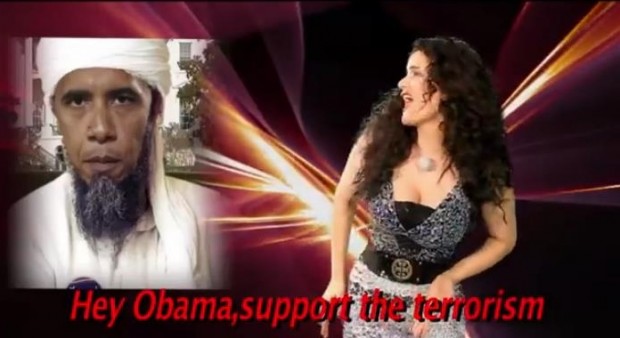 She then accuses Obama of joining forces with “the terrorists,” calling them “all the disgusting guys”:

At the 3:36 point in the video, Elmasry switches to English, in which she blasts Obama for his friendship with Israel, Turkey and Qatar. Qatar has strong ties with the Muslim Brotherhood , having provided $8 billion in aid to Morsi’s government over the past two years, according to Lebanon’s Daily Star. She says:

Your father and your mother
Your Israel, your Turkey, and your Qatar
All of you , Go to hell!
Listen, Obama
We are Egyptian
We are civilization
Are you listen, Obama?

At the end of the video, English script appears on screen saying: “When Egypt talking, should be America shut up.”

During the massive demonstrations leading up to the ousting of President Morsi last month, numerous anti-American signs were seen in the crowd blasting Obama and Ambassador Patterson over their perceived affinity for the Muslim Brotherhood. An image that appeared repeatedly and was also seen in the video showed Patterson meeting with Muslim Brotherhood Spiritual Guide Mohammed Badie.

Communist Party makes a comeback ... Guess where!
archives most recent
More from Beliefnet and our partners
previous posts