If you’re a “right-wing” supporter of “civil activism, individual freedoms and self-government,” you’d better keep your head down.

You won’t believe who claims you’re actually a DANGER to the U.S. 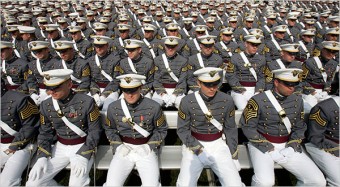 A new West Point study released by the U.S. Military Academy’s Combating Terrorism Center is linking opposition to abortion and other “fundamental” positions to terrorism, and pro-life leaders say it’s just a way to paint them in a negative way.

The study, “Challenges from the Sidelines: Understanding America’s Violent Far-Right,” says the major far right threats are from, “a racist/white supremacy movement, an anti-federalist movement and a fundamentalist movement.”

“The anti-abortionists have been extremely productive during the last two decades, amassing 227 attacks, many of them perpetrated without the responsible perpetrators identified or caught,” Perliger wrote. “And while, in both cases, the 1990s were more violent than the last decade, in the case of anti-abortion, the trend is much more extreme, as 90 percent of attacks were perpetrated before 2001.”

“I can see exactly what is going on with reference to the pro-life movement. The use of two words expose the bias and hatred for what we stand for as a movement. Those words are ‘attacks’ and ‘violence’,” Brown said.

“When it comes to pro-life activism, the definition of violence is retooled to include screaming, sitting in or blockading, and in the situation when someone who is clearly mentally imbalanced does something actually violent at or near an abortion mill, the act is immediately attributed to a pro-lifer even when there is no evidence that the perpetrator was ever involved with the mainstream pro-life effort,” Brown said.

“All of us have issued statements condemning violence because abortion is the ultimate act of violence and in response we are called to imitate Christ, not the abortionists. So the paragraph is designed to paint pro-lifers in a way that scares others, whether or not the depiction even remotely reflects the facts, which of course it does not,” Brown said.

The report comes from a center at the institution where men and women are trained to be Army officers. While the center’s reports often address threats from al-Qaida and other extremists, the latest work addresses the cross-section of America that authors perceive as the “far right.”

It alleges “anti-federalists” are those who have strong beliefs about the government, “believing it to be corrupt and tyrannical,” and those Americans who support individual freedoms and self government.

It claims that those who adopt a liberal philosophy are “future oriented” while conservatives are linked to the violence of the “far right” and live in the past.

“Liberal worldviews are future- or progressive-oriented, conservative perspectives are more past-oriented, and in general, are interested in preserving the status quo,” wrote the authors.

“The far right represents a more extreme version of conservatism, as its political vision is usually justified by the aspiration to restore or preserve values and practices that are part of the idealized historical heritage of the nation…”

Another suspect group in Perliger’s study are people who support the sovereignty of the United States. And he concludes the anti-government movement is a recent phenomenon.

“Violence derived from the modern anti-federalist movement appeared in full force only in the early to mid-1990s and is interested in undermining the influence, legitimacy and effective sovereignty of the federal government and its proxy organizations,” Perliger wrote.

“The anti- federalist rationale is multifaceted, and includes the beliefs that the American political system and its proxies were hijacked by external forces interested in promoting a New World Order in which the United States will be absorbed into the United Nations or another version of global government,” Perliger wrote.

“They also espouse strong convictions regarding the federal government, believing it to be corrupt and tyrannical, with a natural tendency to intrude on individuals’ civil and constitutional rights. Finally, they support civil activism, individual freedoms, and self-government. Extremists in the anti-federalist movement direct most [of] their violence against the federal government and its proxies in law enforcement,” Perliger wrote.

Herb Titus, a constitutional law professor, former dean of the Regent University School of Law and distinguished fellow with the Inter-American Institute for Philosophy, Government, and Social Thought, says it’s an attempt to link conservative thought with violence.

“Professor Perliger has adopted the strategy of many left-wing members of the professoriate, concentrating on the behavior of a few in order to discredit many who hold similar views but who do not engage in any form of violence,” Titus said.

“His theory is that of the iceberg, that which as seen may be small, but it hides what is a much larger threat just below the surface. Obviously, the professor disagrees with those who favor small government, cutting back of federal government encroachments upon the powers of the state and to discredit this movement focuses on a few gun-toting militia,” Titus said.

Titus turns his attention to who he believes is the source of the study.

“Like so many in the Obama administration, Perliger does not want to engage in any dialogue on the issues, but just discredit an entire political movement by ad hominem charged words,” Titus said. “Perliger is not a serious scholar, but a propagandist for the existing regime.”

Perliger turned his attention to Christian fundamentalism and asserts a connection between all three of his sub-groups.

“Unlike the movements discussed previously, the fundamentalist movement’s militant and violent nature was relatively late to develop. For many years the… fundamentalist movement did not produce violent sub-groups, but rather functioned as a source of intellectual inspiration and a moral justification for the violent activities and operations of ideologically related movements,” Perliger wrote.

“Hence, it is not surprising that many of the prominent ideologues of the white supremacist and anti-federalist movements intensively cooperated with – and at times saw themselves as part of – the fundamentalist movement. This dynamic allowed the penetration of non-identity ideas into the movement, and in many ways facilitated the narrowing of the gaps between the fundamentalist movement and other streams of the American far right,” Perliger wrote.

Former Army intelligence officer and NATO intelligence specialist Tim Tooman says the juxtaposition of all three groups in one paragraph is intentional and notes the frequent use of the words for Christianity.

“Christian and derivatives [are] used 75 times in the document, although often carefully qualified as in Christian Identity Group. Perliger’s writing is OK, but could be misinterpreted by the quick reader,” Tooman said.

“There is no problem with U.S. Christianity supporting domestic terrorism. Personally I think some in the mainstream media would like there to be as it would make a great headline – and distract from actual terrorism support from some Islamic groups,” Tooman said.

Tooman says the paper is directed at solving a non-existent problem.

“This seems to be a well researched research paper on a non-issue as far as the military is concerned. There are of course issues discussed within it relevant to local and national law enforcement agencies. So, it’s 148 pages of beating a dead horse that never really had any life in the beginning,” Tooman said.

“I find the overuse of the term ‘far right’ objectionable – 410 times in a 148-page document. Pages 13-18 purport to define the far right, but fall short,” Tooman said.

Former FBI counterterrorism officer and terrorism analyst and consultant John Guandolo says the study is another example of the continuing ideological shift of the national security apparatus away from the real terrorism threat to the United States – Islamic terrorism.

“That shift has already been made. The Department of Homeland Security has codified it in their internal language. Veterans and Christians are the threat. Muslims are all peaceful and there is nothing more to see here,” Guandolo said.

He cited John Brennan, the nominee to be the next CIA director, and his vocal defense of Islam.

In a speech delivered Aug. 9, 2009, to the Center for Strategic and International Studies that is archived on the White House website, Brennan said using “a legitimate term, ‘jihad’ – meaning to purify oneself or to wage a holy struggle for a moral goal” – to describe terrorists “risks reinforcing the idea that the United States is somehow at war with Islam itself.”

As WND reported, Brennan advised in the speech that U.S. foreign policy should encourage greater assimilation of the Hezbollah terrorist organization into the Lebanese government.

In a July 2008 article in The Annals, a publication of the American Academy of Political and Social Sciences, Brennan argued it “would not be foolhardy, however, for the United States to tolerate, and even to encourage, greater assimilation of Hezbollah into Lebanon’s political system, a process that is subject to Iranian influence.”

Terrorism analyst and Jihad Watch publisher Robert Spencer says the public should be aware of what the military and intelligence communities are saying to one another. Spencer says the West Point-released study is another obvious example of the government’s four-year campaign to downplay the threat of Islamic terrorism.

“This is of a piece with the 2009 DHS report that identified right-wing extremists as a terror threat. It is another attempt to deflect attention away from the Islamic jihadists,” Spencer said.

WND reported that the April 2009 report, “Right-wing Extremism: Current Economic and Political Climate Fueling Resurgence in Radicalization and Recruitment,” openly says Christians are the main threat to the United States.

Islam and terrorism analyst and Atlas Shrugs publisher Pamela Geller says this is another insult towards those who love their country.

“This is another appalling attempt to demonize loyal Americans and whitewash the Islamic threat,” Geller said. “West Point probably is working on orders from higher ups. Or else it has bought into the dominant PC culture.”

The Combating Terrorism Center at West Point has not responded to WND’s requests for an interview.

Michael Carl is a veteran journalist with overseas military experience and experience as a political consultant. He also has two Master’s Degrees, is a bi-vocational pastor and lives with his family in the Northeast United States. More ↓