Dear Watchwoman on the Wall readers:

I have four dear friends who have been deeply affected by Alzheimer’s.  Two are in nursing homes and two are being cared for by loving spouses who miss dreadfully the love, affection and relationship they used to have with their spouses.  It is a tragic disease.  My heart and prayers go out to these people.  Additionally, a very close loved one has children afflicted with Aspergers.  So I am very moved by this video and article below from CBN.

FYI – I am not affiliated with CBN and have no financial interest whatsoever in anything connected to this article.  This is strictly FYI.  Also, as far as getting coconut oil, I found that it can be purchased online from Wal-Mart – because our local Wal-Mart did not have it on their shelves, but it costs more than the $5 price mentioned by the woman in the video, but not nearly as much as the coconut oil mentioned in the article below.

(Sorry, I couldn’t embed it here.)

This is the most viewed video at CBN.com in all of last year 2012.

Out of all the videos viewed on our CBN News website last year, the most popular by far showed how coconut oil helps some Alzheimer’s patients. More than 5 million people watched it. 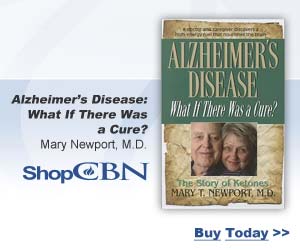 Now, some heavy-hitters within the Alzheimer’s medical establishment are also taking notice.

The video told the story of Steve Newport, whose Alzheimer’s symptoms reversed after he started taking coconut oil.

His wife, Dr. Mary Newport, a Florida neonatologist, documented her husband’s astounding progress in her book, Alzheimer’s Disease: What If There Was A Cure?

Two weeks into the treatment he drew a clock which was noticeably better, and after just five weeks the improvement continued.  (See below.)

Sign up for a free Fact Sheet:
Fight Alzheimer’s Disease With Coconut Oil

Steve’s story spread like wildfire. His wife has since been busy gathering the reaction.

“Some of these responses have been quite dramatic,” Dr. Newport said. “I do have a collection now of almost 220 reports, mostly from caregivers and some from the person themselves, reporting that they saw improvement after they started taking coconut oil.”

All these testimonials are turning the Alzheimer’s community on its ear. For example, at the world-renowned Byrd Alzheimer’s Institute, people can’t stop talking about them.

“When a patient or a family member comes in with a patient, and they’re interviewing with the physicians, they always have a question, ‘I’ve heard about coconut oil. What’s going on with that,'” Dr. David Morgan, chief executive officer for the Institute, said.

“And at least up until this time all we can say is there’s anecdotal information, that it may be beneficial, but there hasn’t been any kind of research study that’s ever been done,” he said.

That’s about to change with the Institute’s first study of how coconut oil affects human beings with Alzheimer’s. If the study finds evidence that coconut oil helps, doctors will finally have the proof they need to begin recommending it to their patients.

“I think they feel uncomfortable making a recommendation for something that they don’t feel justified by the science behind it,” Morgan said. “And that’s part of the reason we’re going to do the study, is to determine, can we then provide that justification.”

Here’s how it appears the coconut oil works. In patients with Alzheimer’s, insulin resistance prevents their brain cells from accepting glucose, their primary fuel. Without it, the cells die.

But there is an alternate fuel known as ketones, which cells easily accept. Ketones are metabolized in the liver after eating coconut oil.

In the 1960s, Dr. George Cahill, along with his colleagues, was first to show that the brain could use ketone bodies.

This discovery became the basis for the treatment of Alzheimer’s disease with ketones a subject in which he took an active interest. Cahill died at age 85 in Peterborough, N.H., July 30, 2012. while singing the Hallelujah chorus from Handel’s Messiah with two of his daughters: Rhett and Eva.

So can coconut oil help these people, too? It appears so, at least some of them.

For example, doctors diagnosed Sam Stout with Parkinson’s disease seven years ago. He soon began losing the ability to perform many function.

But five months ago he started taking coconut oil and his life changed again.

“I can now write. I’ve written letters, which I haven’t done in three years,” he said. “I can swirl a wine glass; I can beat an egg; I can grate cheese. All these things I couldn’t do. And I think I have better balance.”

“I think I’m clear-headed, more clear-headed,” he remarked. “People have said to me, ‘You look great this year,’ and I can only attribute it to the coconut oil because that’s the only thing that’s changed.”

Then there’s Butch Machlan, an American living in Mexico City, who has suffered with ALS for almost five years. He said his symptoms have reversed thanks to coconut oil.

Machlan demonstrated his success by picking up a snow globe.

“I can pick (this) up,and there was a time when I had difficulty with that,” he explained, “Not just picking it up, but holding on to it, getting my fingers to go around it, and that’s gone.”

While Machlan isn’t walking perfectly, his legs are stronger and about to get even better.

“I have bad knees from the past,” he said. “But I’ve improved enough that the doctors have said that I qualify for a new knee in my left leg.”

So while not everyone has experienced great results with coconut oil, there are plenty who have, enough that the medical community will spend time and money learning exactly who it helps and why.

As if coconut oil were not good enough, there is a super-concentrated form of coconut oil, called “ketone ester” that packs an ever greater punch than regular coconut oil. It was developed by Dr. Richard Veech and his colleagues at the National Institutes of Heath.

That means it could be even better for people with diseases ranging from Alzheimer’s to autism.

Researchers also saw improvements in the mice’s learning and memory performance as well as decreased anxiety.

While that study is encouraging, there is a problem. Before the ketone ester can be made available to the general public, it must first be studied on human beings. Unfortunately, the funding is severely lacking to make enough of of ketone ester to do this testing.

The National Institutes of Health has been committed to funding the production of the ester up until now. But that funding is set to run out, thwarting the human study and thus depriving the general population of the healing benefits of the ketone ester.

Experts within the Alzheimer’s community say the government dollars appropriated for the funding for Alzheimer’s Disease research is disproportionately small.

“The amount of funding that we have for Alzheimer’s disease is ridiculously low,” Dr. Morgan said. “For cancer, 4 percent of medical care costs are spent on research, in heart disease, it’s 2 percent, in Alzheimer’s it’s .3 percent, (three-tenths of one percent). For AIDS it’s 20 percent.”

Morgan lamented that the Obama administration agreed to put $80 million into Alzheimer’s research in the form of The National Alzheimer’s Project Act, but two NIH bills have come before Congress and neither contained even a mention of the act.

Why is there such a discrepancy between research funding for Alzheimer’s and other diseases?

“It’s age-ism at the legislative level,” he explained. “They say, ‘That’s old-timers. Who really cares about these old folks?'”

Morgan said people should contact their state and federal representatives and demand more money be spent on Alzheimer’s research. He said if that doesn’t happen, the end result will hurt us all.

“We need to spend more money on research or this disease will decimate Medicare,” he warned. “It won’t survive until 2030 unless we do something that really slows the progression of the disease or treat it so people can live dignified lives.”

There is a new coconut oil product now available online in which many will be interested. This is a creamy, very tasty liquid food called Fuel for Thought. It’s what Sam Stout, (mentioned above) takes daily and it is also what will be used in the Byrd Alzheimer’s Institute’s human study. It can be purchased here.

This product was formerly called “cocomul” and was mentioned in the book, Alzheimer’s Disease: What If There Was A Cure?

The liquid is packaged in one-ounce bottles, which are especially helpful for people in assisted living and for people living on their own with memory impairment.

It is very easy to take “as is,” which eliminates the need to come up with creative ways to include coconut oil in other foods. It also contains concentrated MCT oil, the active ingredient in coconut oil.

Fuel For Thought® is in limited pre-production and currently taking reservations for the product. As supplies become available, orders are filled on a first-come, first-served basis. Availability will depend on the number of reservations.

How to Send to Newtown CT (P. O. Box Created Special)
archives most recent
More from Beliefnet and our partners
previous posts