Have You Heard About ‘Spigot Cities’ That May Pump Votes to Obama?

Editor’s Note: This article is based on “The Machine,” a documentary that aired on TheBlaze TV Nov. 1 as the first of an occasional news magazine series called “For The Record.” An encore broadcast is scheduled for Sunday, Nov. 4 at 8pm ET.

President Barack Obama’s campaign team could have more control over the outcome of the 2012 election than you think, according to a report by TheBlaze documentary team that reveals the potential for highly targeted voter fraud in key cities that could determine who gets the electoral votes from many swing states.

The potential fraud would be focused on major, decisive cities that are believed to help keep states blue, and therefore earning them the electoral college’s votes. They’re called “spigot cities.”

J. Christian Adams, an author and former attorney for the Department of Justice’s Civil Rights Division, spoke about the spigot cities on the BlazeTV documentary — “The Machine” — which delves into various forms of voter fraud and how it’s being perpetuated. Many believe it is ultimately resulting in a loss of freedom through a corrupt voting system.

Adams believes spigot cities are managed by the Obama campaigned with some involvement by the Voting Section of the Justice Department.

Calling upon the 2008 election, Adams pointed out that Republican Sen. John McCain’s campaign had a policy to not call the Justice Department’s voting section. The campaign for then-Senator Barack Obama, on the other hand, is believed to have made frequent calls to the department requesting these cities have an adequate number of voting machines in case a precinct received a large amount of voters at one time.

“So you had one side using the DOJ as a potential lever to help them gain power, and you had the other side fleeing from the battlefield,” Adams said.

Flooding the polls would be a necessary factor to create a spigot city. In the documentary, Adams discussed how voter manipulation would be employed for these record poll turnouts, which he says are generally reported in a positive light by the media.

“You have election officials telling voters for whom to vote,” Adams claims. “You have forced assistants. You have bus loads of people who are losing their right to vote as they’re marched into the polling place and have somebody else mark their ballot for them.”

John Fund, author and writer for National Review, said in the documentary that “people will do it for the 20 bucks that are handed at a homeless shelter, and they’re told to get on a bus and go from polling place to polling place, casting votes.”

TheBlaze recently reported about a DNC staffer who was fired for allegedly helping a person cast their vote twice. Some have expressed worry that electronic voting machines with calibration issues could be robbing citizens of their votes too.

A general aversion to voter identification requirements and support for same-day voting registration is believed to contribute to this practice of flooding polls as well.

Watch this clip from the documentary discussing spigot cities and voter fraud:

“Same day voting is an engraved invitation to voter fraud,” said Fund, who wrote the book Who’s Counting?: How Fraudsters and Bureaucrats Put Your Vote at Risk. “Because let’s say it’s Minnesota, anybody can show up at the polls, register to vote, and then immediately vote. They don’t have to show ID. Somebody has to vouch for them. So anybody can come in who’s a Minnesota resident and say, ‘Well, I vouch for this person. I know Joe.’”

The requirement of a voter ID has been making the rounds in the news during this entire election cycle. Those against imposing a requirement, calling it unconstitutional, argue that it would disenfranchise minority voters who have a hard time obtaining identification. At the same time though, TheBlaze reported a Washington Post poll that found near 75 percent of Americans believe the requirement of a voter ID is reasonable.

Although some might deny the existence of voter fraud, fail to see issues with same-day voter registration and at the same time balk at the idea of an ID requirement, there are real consequences of corruption if it occurs.

One example included recently on TheBlaze has Fund discussing how he believes Sen. Al Franken was elected in Minnesota under fraudulent conditions and, if that’s the case, points out that Franken was the deciding vote that passed Obamacare. Some of the controversy surrounding the election between Franken and incumbent Norm Coleman for Minnesota in 2008 — which was won by Franken by only 312 votes after months of litigation following an initial 725-vote lead by Coleman — is that a conservative group Minnesota Majority found evidence of voter fraud, which included voting conducted by ineligible convicted felons.

So what can be expected of “spigot cities” and alleged voter fraud with the 2012 Presidential Election?

“Well, the problem is– voter fraud is– cyclical,” Fund said. “If the election isn’t close, then people care about less voter fraud. If it’s perceived as very close, there’s an enormous temptation to put your thumb on the scale of democracy. I think this election is gonna be very close.”

You can watch an encore broadcast of the documentary Sunday, Nov. 4 at 8pm ET on TheBlaze TV or on Dish channel 212.

DISCLAIMER: Beliefnet puts paid advertisements on “Watchwoman on the Wall” blog site including some that would never be approved of by the King James Bible, Pastor Ernie Sanders of Doers of the Word Church, What’s Right-What’s Left Radio Ministry, the Voice of the Christian Resistance, Geauga County Right to Life and Donna Calvin.  We at www.WRWL.org do not condone, endorse, adhere to, practice or believe in many of the topics and some of what other bloggers promote or their religions at Beliefnet.  However, Mrs. Calvin has no control of what Beliefnet displays.   She blogs at Beliefnet because she is in the missionary field ministering to true believers posting articles and commentaries informing pro-life, conservative Christians of recent anti-Christian acts and hostile legislation to God’s Agenda and His Will for the world.  Hopefully, unbelievers will read these along with the salvation message of Jesus Christ as written in the Gospel of John, Chapter 3, according to the King James Bible, and be saved.  A missionary must go into the unbelievers’ territory to reach them.  Her mission is to Proclaim Warning to a Nation that has forgotten their Lord and Savior Jesus Christ, the only Truth, the Life, and the only Way to the One God the Father. (Posted 11/02/12) 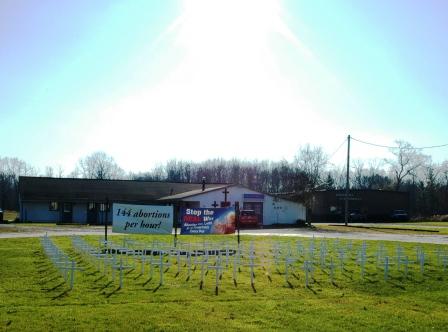