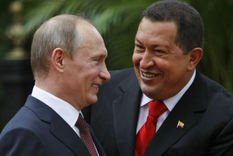 Russian President Putin and President
Chavez of Venezuela are both communists
AND BOTH HAVE CLOSE TIES WITH IRAN.
Hussein O told Putin he would be more
flexible in his 2nd term. Chavez
nationalized the media in his country
– a distinct trait of communist rulers
(BTW, Chavez was ELECTED just like
Hussein O was ELECTED.) & Hussein O
nationalized GM in his country
(you know which country that is,
the one that USED to be governed
by the people). Well, if it walks like a duck,
governs like a duck, then it must be a duck.
.
.
COMMUNIST ENDORSEMENTS INCLUDE CUBA’S CASTRO!

The latest [dictator] to publicly announce his support for the commander-in-chief’s reelection bid was Venezuela’s Hugo Chavez, who this week assured he’d vote for Obama if he were from the United States. The America-bashing strongman made the announcement on state-owned television, saying “Obama is a good guy” and that if Obama was from Caracas, he’d surely return the favor by voting for Chavez.

Earlier in the year the government-official daughter of Cuban military dictator Raul Castro proclaimed her country’s support for Obama during a visit to the U.S. “I believe that Obama needs another opportunity and he needs greater support to move forward with his projects and with his ideas, which I believe come from the bottom of his heart,” Mariela Castro said during a cable news interview. … 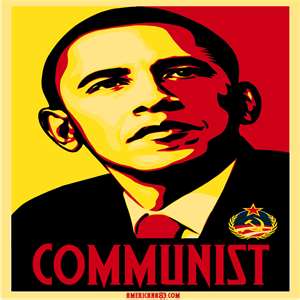 That brings us to Russia’s Vladimir Putin, who has eliminated most elections in his country, monopolized all major media and destroyed the political party system. … In a letter to a major newspaper, the president of a group dedicated to expanding freedom around the world points out that under Putin there has been an “across-the-board crackdown on civil society.” The piece goes on to ask: “Will Obama stand up against Putin’s abuses?” Unlikely, now that the Russian dictator has extended his endorsement.

Who Should Christians Vote For?
archives most recent
More from Beliefnet and our partners
previous posts