Obama refuses B-day Cake from RNC (Maybe ’cause it’s not the right day?)

The cake read “Happy Birthday Mr. President – You didn’t Bake This” and had a edible image on it with Barry smiling as he’s laughing hysterically. As far as we know, the cake marks Obama’s birthday on Saturday. That is unless an actual birth certificate surfaces proving he was born on another day.

They didn’t just send a cake either. The Hill reports,

“Happy 50.99726th Mr. President,” RNC spokesman Tim Miller wrote in an email. The decimal number tweaks the Democrats on an official blog post from White House Economic adviser Alan Krueger, who pointed out the July jobs report, released Friday, indicated the “unemployment rate ticked up to 8.3 percent in July (or, more precisely, the rate rose from 8.217 percent in June to 8.254 percent in July).

The RNC also marked the occasion of Obama’s birthday with faux e-birthday cards mocking gaffes by the administration.

And yes, as you might imagine, Team Obama has yet again taken the opportunity of Barry’s birthday to pan for campaign donations.

Meanwhile, Obama was doing the one thing that he has done consistently while in office: He took in a round of golf. 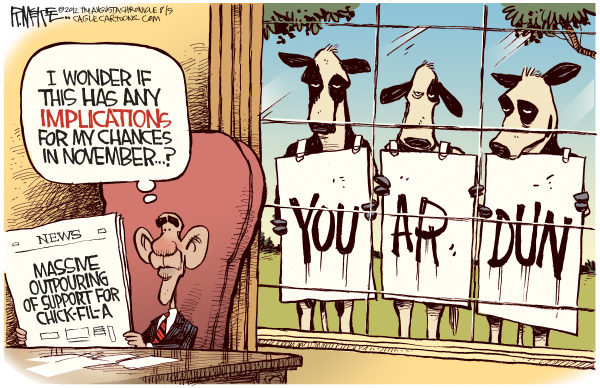