IN THE PAST, RECALL THAT THE NEW BLACK PANTHERS HAVE GONE UN-PROSECUTED FOR VOTER INTIMATION BY THE DEPARTMENT OF JUSTICE UNDER THE OBAMA ADMINISTRATION. Click to read more → New Black Panther Party voter intimidation case – During the 2008 presidential election, poll watchers found two New Black Panther militia members shouting racial slurs outside a polling place in Philadelphia.  One of the two was a credentialed poll watcher, while the other was a New Black Panther member who had brought a police-style nightstick baton.  … Read more about this at → http://en.wikipedia.org/wiki/New_Black_Panther_Party
<   –   and at   – >    ↓
http://en.wikipedia.org/wiki/New_Black_Panther_Party_voter_intimidation_case 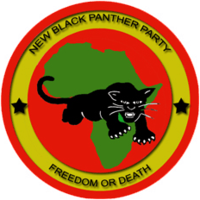 Yesterday afternoon at a press conference Mikhail Muhummud and the New Black Panther Party circulated a “wanted dead or alive” poster for George Zimmerman for shooting to death a Florida teenager four weeks ago.

The new Black Panther Party offered a bounty of $10,000 Saturday for the “capture” of a Florida neighborhood watch captain

Members of the New Black Panther Party rally next to a memorial to Trayvon Martin outside The Retreat at Twin Lakes community in Sanford, Florida, where Trayvon was shot and killed by George Zimmerman. The group is offering a $10,000 bounty for Zimmerman’s capture.

RIGHT BLASTS OBAMA FOR HIS COMMENTS ON SLAIN TEENThe group hopes to collect $1 million off the outrage by next week.New Black Panthers members pointed to what they called the inaction of government officials — from Sanford city officials up to the governor — and accused them of lying and delaying justice.They also said Angela Corley, the newly appointed special prosecutor, was an enemy of the black community.“She has a track record of sending innocent young black men and women to prison,” Muhammad said.The Southern Poverty Law Center calls the New Black Panther Party, a black-separatist group created in 1989, “virulently racist and anti-Semitic.”PHOTOS: NATIONWIDE PROTESTS DEMAND JUSTICE FOR TRAYVON MARTINZimmerman said he shot Martin in self-defense. Zimmerman’s family says he is Hispanic and race was not an issue.Trayvon’s mom said she was having a hard time realizing that her son’s not coming home, People magazine reported Saturday.“I look at every door and think, he’s just going to walk through it any minute,” Sybrina Fulton told the magazine.“I just want to see him again, but I can’t.“He’s in heaven, looking down at me.” 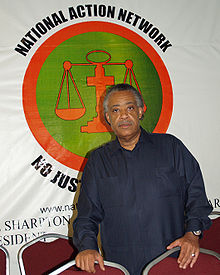