“Gay Marriage” as a Sign of the End Times?

Harold Camping was wrong about Judgment Day, but he was right that the rise of the homosexual movement is a sign of the end times.

We are probably all familiar with the oft-cited fact that the collapse of numerous civilizations prior to our own were heralded by a rise in sexual immorality, especially homosexuality. That alone should alert us to the grave situation we find ourselves in today. But there is a deeper spiritual significance beneath that statistic. God has chosen rampant homosexuality to be a key warning sign for judgment of the world as a whole, and not just of individual nations.

Genesis is the book of beginnings which sets the tone and lays the foundation for all of our theology. It is there in the first chapter that God establishes the “one flesh” standard for human sexuality which is lifetime, monogamous heterosexual marriage. This isn’t just a guide for individual conduct, it is the essential bedrock of civilization.

Thus, the corruption of marriage was instrumental in bringing about the wickedness and violence that caused God to bring the flood upon the world. Jesus warned that “as the days of Noah were, so also will the coming of the Son of Man be. ‘For as in the days before the flood, they were eating and drinking, marrying and giving in marriage, until the day that Noah entered the ark‘” (Matt. 24:37-38, referencing Gen 6-7). Not only had marriage been corrupted, the people were so apathetic of that fact that they gave no credence to Noah’s warning that their sin would soon end in judgment.

Homosexuality is not mentioned specifically as an aspect of the pre-flood corruption, but we can assume that a society of men and women whose thoughts “were only evil continuously” (6:5) were involved in every form of sexual perversion. And we have a clue in the story of Ham, who, after the flood, “looked upon his fathers nakedness” (9:22). A school of Jewish tradition holds that Ham or his son Canaan engaged in some form of homosexual molestation of Noah. Be that as it may, Noah then curses Ham “for what his youngest son had done to him” (v.24). Canaan then migrates to the land that would bear his name, and his near descendants establish the infamous cities of Sodom and Gomorrah (13:7-13).

Genesis 19, of course, tells the story of God’s destruction of Sodom and Gomorrah with fire and brimstone, first revealing that the final act of wickedness of Sodom was the attempt by all of the men of the city “both young and old, all the people from every quarter” (19:4) to rape the two men (angels) who had come to rescue Lot. This incident is far more than an interesting Bible story. Look at it in context. It is the ONLY incident of its kind in the Bible! And it follows very soon after the flood. Note that God’s wrath had not been triggered by Canaan’s nephew Nimrod’s more direct rebellion at Babel (10:9-10, 11:1-9), but was triggered by the sin of Sodom: the complete degeneration of the society into sexual perversion.

Notice also that it was wrath by fire! Following the flood, in Chapter 9 God made an everlasting promise never again to destroy the earth by water, and said “I set my bow in the cloud and it shall be for a sign of a covenant between Me and the earth.” Thereafter, fire was always the symbol and means of God’s wrath. Indeed, Jude 1:7 reads “just as Sodom and Gomorrah and the cities around them, since they in the same way as these indulged in gross immorality and went after strange flesh, are exhibited as an example in undergoing the punishment of eternal fire.” The story of Sodom and Gomorrah IS the very example of the final judgment. (See Revelation 20:10-15). Or, as the Apostle Peter said “He condemned the cities of Sodom and Gomorrah by burning them to ashes, and made them an example of what is going to happen to the ungodly” (2 Peter 2:6).

Did you also catch the spiritual significance of the rainbow in this context? Why has the homosexual movement chosen the rainbow as its symbol? I think they are deliberately flaunting their sin under God’s nose while holding up the reminder that He promised not to destroy the earth by flood again. They are proclaiming “See, God, you can’t stop us!” which was the exact sentiment expressed by Massachusetts Governor Deval Patrick when he signed the first “gay marriage“ policy in the nation into law: looking up at the sky he said something to the effect of “See, nothing happened.” The “gays” of course insist that Sodom was destroyed because of “inhospitality” not homosexuality, so they are completely blind to the deadly folly of flaunting “Gay Pride” under the rainbow banner. As Isaiah put it “..they parade their sin like Sodom; they do not even conceal it. Woe to them, for they have brought evil on themselves” (3:9).

To the extent that Romans 1:18-32 can be viewed as prophecy (as well as instruction to the Roman believers of that day), homosexuality is given again as the sign of the end with its laundry list of evil attitudes and behaviors that define the “perilous times” of the final days. The people are “given over to a depraved mind” as a final consequence of “suppressing the truth in unrighteousness” evidenced by the shameless exhibition of both male and female homosexuality (v.26-27). God’s wrath is promised not just for the practice of those things by some, but because of the approval of them by society (v.32).

I have made this point before, but it bears repeating. I am 53 years old. When I was born homosexuality was illegal throughout the entire world. In the space of just half a century this tiny 1-3% of the population have made themselves a global political power with greater influence in the courtrooms and legislatures of the world than the Church of Jesus Christ. This astonishing transformation surpasses that of Darwinism, Marxism, and even Islam in its speed and breadth of reach. To my thinking, this can only have been accomplished by the god of this world (Satan 2 Cor 4:4) who knows his time is short and is making his move. What is more alarming is the shocking apathy of the church, which I take as a sign of the apostasy warned about by Jesus in Matt 24:12. The “love of most” for the truth of God truly has grown cold.

Recently the State of New York legalized “gay marriage,” just in time for the “Gay Pride Parade” (that included many of NYC’s political elites), and for the first time, the United Nations officially declared homosexuality a “human right.” I am finding triumphal emails in my in-box from homosexual activists, gloating over their latest victory. In the past I would have found these irritating, but now they simply confirm my impression that the time is very short. I believe it is the same triumphalism described in Revelation 11:7-10 upon the murder of God’s two witnesses: “When they have finished their testimony, the beast that comes up out of the abyss will make war with them, and overcome them and kill them. And their dead bodies will lie in the street of the great city which mystically is called Sodom and Egypt, where also their Lord was crucified…And those who dwell on the earth will rejoice over them and celebrate; and they will send gifts to one another, because these two prophets tormented those who dwell on the earth.” Why is the great city (Jerusalem) mystically called Sodom in the final days? I think because of the centrality of the spirit of sexual perversion in the Anti-Christ system. What “torments” worldly people? The simple truths of God.

As a final point, we are told in Ephesians 5:21-33 that the melding of a man and woman into one flesh through marriage is a mystery that explains the very relationship of Christ to his bride, the church. Authentic marriage is thus central to the very order of creation and to prophecy. Indeed, according to prophecy, the long age of humanity upon the earth culminates with the marriage feast of the Lamb following the great tribulation (Rev 19:5-9). It is no wonder then that disrespect of marriage by society generally, and the emergence of the counterfeit “marriage” of homosexuals specifically, would define the era immediately preceding the end of the age. 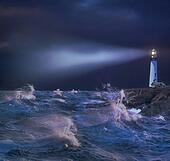 Inspirational. Do you know for sure?
archives most recent
More from Beliefnet and our partners
previous posts